Let's talk about Hearts of Iron 5. The fourth – and current – game is five years old, and shows no sign of slowing down just yet. Even though the age of the grand strategy game will make big sweeping changes more difficult now, there’s still plenty of content ideas left to explore, so any ideas of a Hearts of Iron 5 release date should probably be shelved for now – we’re not expecting an announcement any time soon.

That said, following the WW2 war game for this long means we’ve also had plenty of time to figure out what does and doesn’t work in the current iteration. Hearts of Iron 4 was late by about a year so the development team could pivot into some other areas they wanted to explore, and we’d argue not everything from the original design has stood the test of time.

So, since we’re here and we’ve got nothing better to do while we wait for Victoria 3, let’s engage in some wanton fantasising.

Here are the top five things we would want from Hearts of Iron 5. 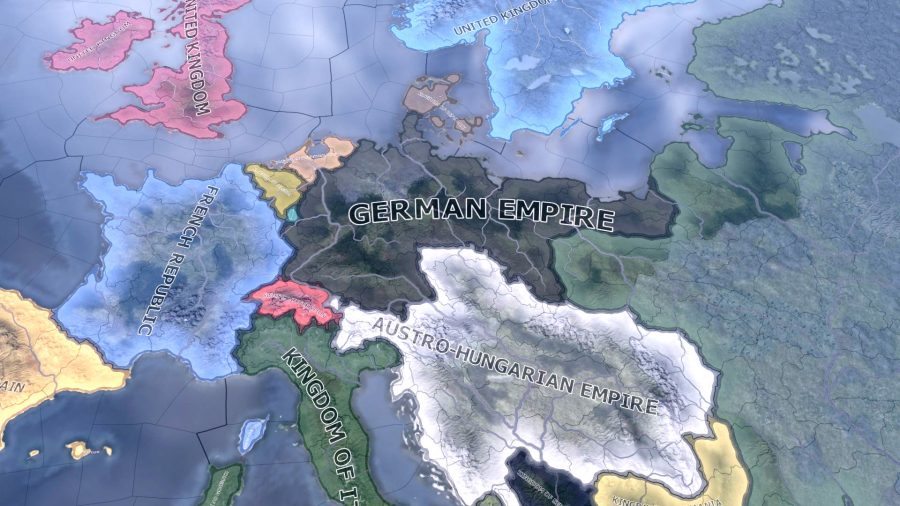 Hearts of Iron 4 has one of the best and most creative mod scenes out of all the Paradox grand strategy games, losing out only perhaps to the fact that it can’t really handle a decent Star Wars conversion (though someone is trying), or big fantasy-style mods along the lines of Lord of the Rings or A Song of Ice and Fire.

But if you’re passionate about warfare and the early 20th century, this game offers the perfect sandbox. Want mods that offer even wackier alt-history, take you back to World War 1, or even give us that modern-era grand strategy wargame we’ve been lacking up till now? The Hearts of Iron 4 mod scene is where it’s at. This is less of a ‘new’ thing we want and more of a desire to see the current levels of support continue. If there are ways the developers can make modders’ lives even easier in Hearts of Iron 5, great, but as long as it doesn’t get any harder we’ll be happy. 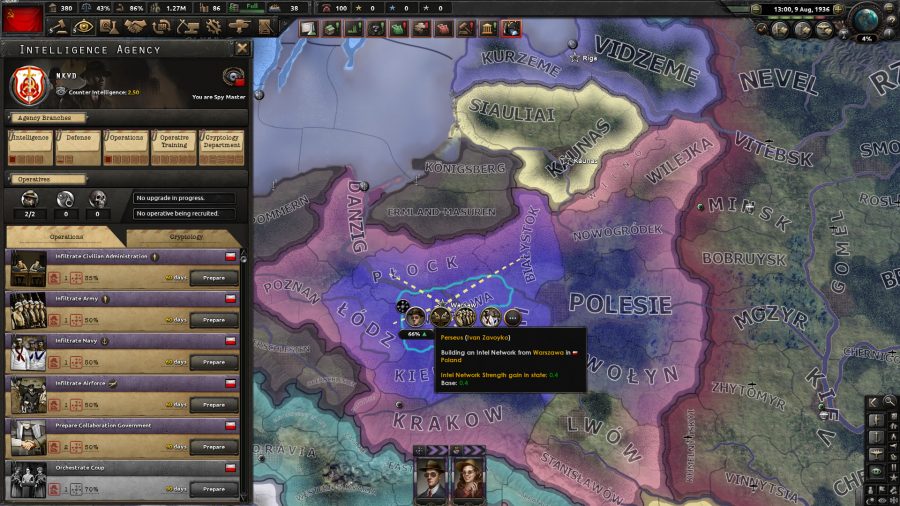 Power to the People

WW2, despite being an iconic clash of big power blocs, also featured a notable amount of clashes of personality, even between those on the same side. You ask any military historian worth their salt and they can tell you about some of the real political challenges around who was in charge of what operation, how area of operations were defined, even the competitions for favour between Hitler’s generals.

Crusader Kings III has done a lot to champion the power of individuals in grand strategy games, and it looks like Victoria 3 is going to be running with this concept as well to some extent. Looking at the current systems in Hearts of Iron 4, the people you choose to lead your armies, or fill your cabinet, are fairly passive and represent stat buffs more than anything else.

I think a new Hearts of Iron game could easily do more to promote conflicts between groups or individuals (The different Japanese military branches were famously at odds with each other), and generally give more internal pushback to the player, especially when it comes to allies.

If a full-fledged character system would detract too much from warfare (this is a wargame, after all), then making better use of Paradox’s already stellar events system would suffice. The point is to throw up narrative wrinkles and remove some control from the player to create a more powerful story, one that can complicate and compliment the war fighting. 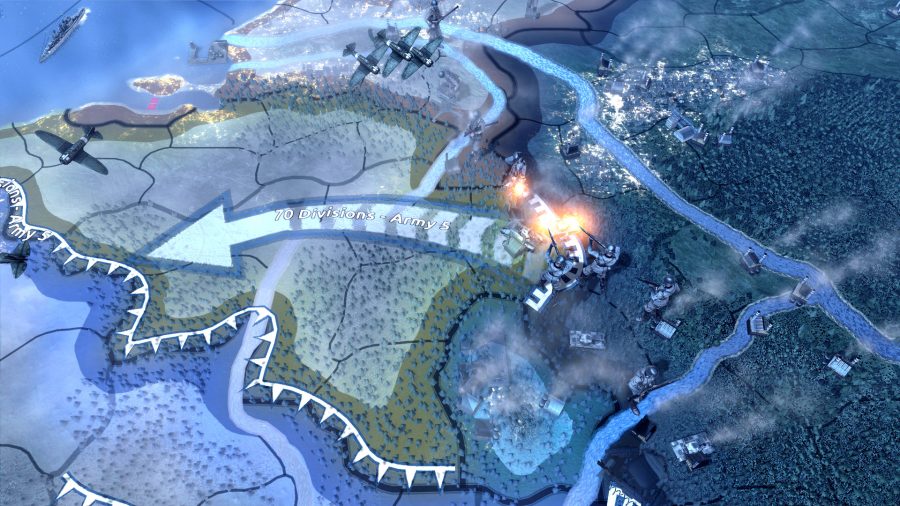 Hearts of Iron 4 is pretty good at land warfare, and in providing meaningful choices in how you manage your military forces. Air and Naval warfare have gotten better over time, but still aren’t quite on par with ground combat. Even then, things like the strategic planner and frontline mechanics in land wars are less than ideal, often breaking down once the fighting starts and not really scaling that well.

Hearts of Iron 5 should take care to try and make sure all of these systems are as good as they can be. We’d love to see a bit more granularity added back into land warfare – although maybe not to the same level as Hearts of Iron 3 – with specific attention to the planner and frontlines. Air and Naval combat is difficult, especially at the strategic scale the game tries to occupy. It’s possible that the developers may need to concede that, if they’re not going to offer more tactical control in these areas, they may need to abstract further and concentrate on how these branches serve the land engagements.

I also wouldn’t mind some more automation features brought in, specifically so that I can trust an AI to fight the air and sea battles for me while I concentrate on my tiny men and their shiny uniforms. Land for life. 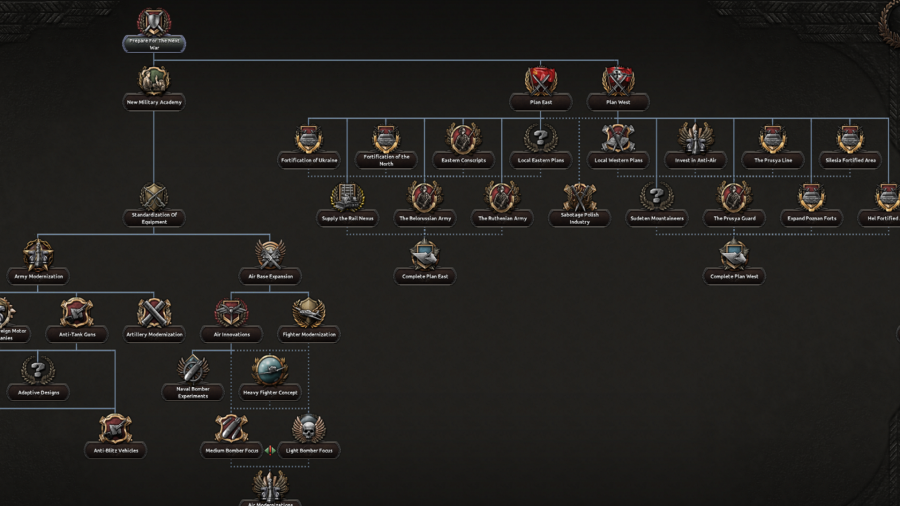 To be fair to the developers, they’ve managed to mould the focus tree system into a useful vessel for delivering the narrative and alt-history content that’s become popular in the game’s later years. The system is definitely in a better place than it was at launch, but after five years I’m not so sure it’s a system that needs to exist in the first place.

The main issue I have with focus trees is that it takes away agency from a lot of other core systems. Why would you bother actually building infrastructure, researching tech, or engaging in diplomacy, when you can wait for the relevant focus tree item to do it for you? Depending on the tree and the circumstances at the time, sometimes it’s not really worth doing anything active – just progress through your chosen path as fast as possible, only engaging in activities that won’t detract from what the tree gives you. Something that actively incentivises you to not play the game to its full extent feels… problematic.

Personally, my vote would be to ditch it entirely, but I’d be interested in hearing arguments for what function it could serve. I think the developers are perhaps on to something with using it as a vehicle to deliver narrative content, but I think it also needs to devolve much of its current purpose back to core systems so that you still have reason to engage in the ‘manual’ aspects of the game.

The focus tree system has manifested itself in other games, such as EU4 and Imperator: Rome’s ‘mission’ mechanics. In the latter, the game gives you some buffs or bonuses when you choose to go down a particular path, but otherwise it’s down to you to bring about the desired outcome using the core mechanics. Once you’ve completed a stage, you can then tick it off for a reward – something along these lines would suffice. 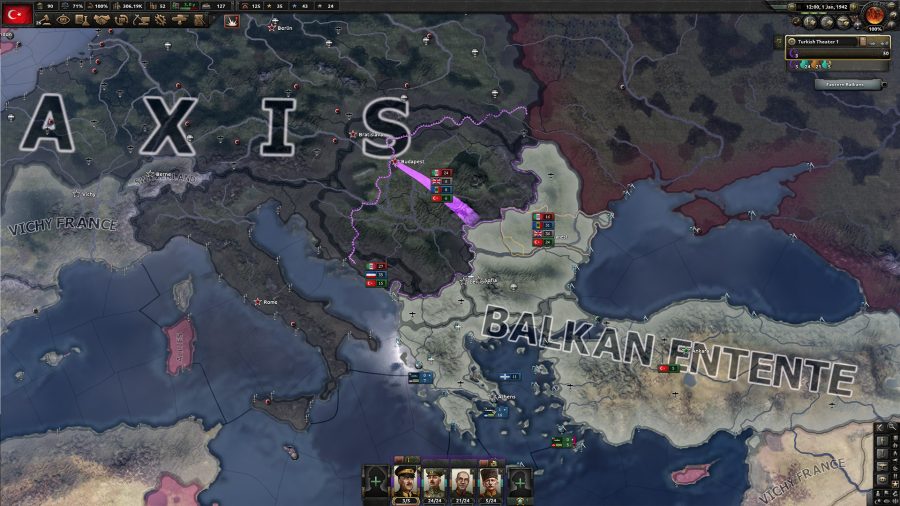 The ultimate issue a new Hearts of Iron game would need to address is where it sits in the ‘history vs sandbox’ debate. At launch, it felt like Hearts of Iron 4 was trying to offer the best of both worlds, but in the years since the game has embraced the ‘historical sandbox’ instead. I haven’t tried recently, but I suspect it’s difficult to get historical outcomes now.

This is in stark contrast to Hearts of Iron 3, which was very much WW2 ‘on rails’ with some leeway to change events at the operational level, but not much more than that. There are still many voices among the community who would prefer a return to those days, and I think ultimately Paradox needs to firmly decide whose side it’s on.

For the record, I think Hearts of Iron 5 should embrace the sandbox, but to do this properly I think it needs to decouple itself from the setting. Perpetually being on the eve of WW2 constrains what the game is capable of in terms of giving a truly open-ended journey through the period. The alt-history options are well researched within the context of the game, but still held-back by the fact that by 1936 many events were already in motion.

A late 20’s early 30’s start might work, but then Victoria 3 is confirmed to last until 1936 and there’s never been two grand strategy games where the start/end dates overlap before.

There you go – our top five wishes for Hearts of Iron 5.