Hearts of Iron IV’s latest dev diary talks more about the changes coming to warfare and military management, and I’m pretty excited. Last week you may remember how the development team (reinforced by Imperator: Rome devs) showed off the new ‘Officer Corps’ systems, which is going to give more control over how your military.

Today’s diary looks into a final aspect of this, which will add more choice to how your forces function in the field. For each branch, there are three ‘spirits’ you can define: one on how the it operates, one on its combat performance, and one that can give direction to the officers and tactics that emerge.

Coupled with this is a ‘preferred tactics’ option that will let you pick from all of the combat tactics that you currently have unlocked, to increase the chances of that choice being used in battle. Some spirits also favour certain tactics, and if you choose that tactic as your preference as well, it doubles its performance. This last point is the bit I find the most exciting.

Combat tactics have been in Hearts of Iron IV since the base game. During battle, armies will pick from a pool of available tactics, with the army with the initiative going last so that it has a chance to counter the opponent’s chosen tactic. Every 12 hours tactics are re-picked. 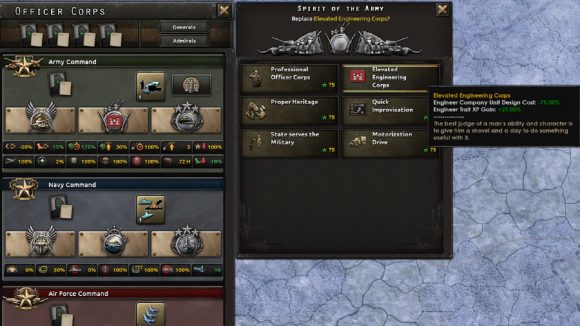 Up until now this system has been largely passive – it happened without you and even if you worked towards unlocking new tactics there wasn’t much you could do to incentivise that new toy being used in an engagement (although the game does have some weighted calculations).

This new mechanic will allow you to enforce a specific doctrinal vision on your armed forces, especially in land warfare (naval units received ‘tactics’ after Man the Guns) and let you direct how your army fights. Enough is left in the hands of AI generals to simulate the chaos of war and not indulge too much in the fallacy of perfect control.

If you know a specific opponent favours a specific tactic, this will also let you put emphasis on choosing the perfect counter-strategy, even if it doesn’t align with your choices elsewhere.

Hearts of Iron IV: No Step Back is the next expansion, and was announced at PDXCon Remixed. There is currently no release date, although you can pick up the game and its add-ons cheap via the Paradox Midsummer Sale over on the Paradox Store.