You may remember that active development of Imperator: Rome was halted earlier this year, at the same time an internal reshuffle formalised the team structure within grand strategy game developer Paradox Development Studio. While the door was left open for work to resume at a future date, in the meantime those working on the ancient-era strategy game needed to be put to work elsewhere, including game director Peter ‘Arheo’ Nicholson.

It was announced at the end of May that the Imperator devs would be joining forces with the main Hearts of Iron team, and now Nicholson makes his Hearts of Iron 4 dev diary debut today with an update on some new features coming to military management.

The ‘Officer Corps’ is a new UI interface that will attempt to unify various disparate systems into one easy-to-manage location, as well as allowing for more direct specialisation across the core military branches. High command and advisors are now unified in one area, and experience has been overhauled – both in terms of how it’s generated and what you can spend it on.

A key example is that the ‘Doctrines’ have been removed from the technology screen and moved into this new interface, and you pay for their costs via experience instead of as technology. 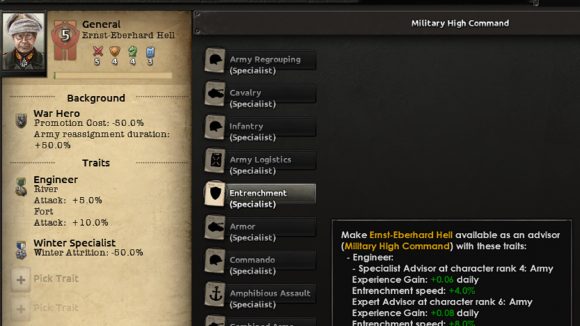 There are also going to be some serious behind-the-scenes changes. National spirits that relate to military bonuses have now been removed and tied solely to advisors, and your generals can be ‘promoted’ to an advisory position and made available in your pool of advisors.

What they offer will depend on what traits they have and the level. This will have significant implications for the Hearts of Iron 4 mod scene. More details as to what you can spend branch experience on will be coming in a future dev diary.

In general the upcoming 1.11 patch and the No Step Back expansion will focus on land warfare and the Eastern Front specifically, even introducing a new tank designer to the game.