Two World Wars are undoubtedly two too many, but over the course of a couple of days, last week, I commanded three nations in three separate simulations of World War 2. As Argentina, The Soviet Union and China, I attempted to guide my people through the quagmire of military escalation, global war and political back-stabbing in the Paradox grand strategy game, Hearts of Iron IV.

Instead of facing AI opponents, I was up against the unpredictable minds of over 20 journalists and designers; sneaky, treacherous people, all. And one thing became clear, after the dust settled: we’re a horribly blood-thirsty bunch.

Hearts of Iron IV sits somewhere between a grand strategy game and a wargame. It’s got the big picture stuff of the former, the trade, diplomacy and idea trees that you find in Europa Universalis IV; but next to those features sit battle plans, logistics and the always hungry war machine. 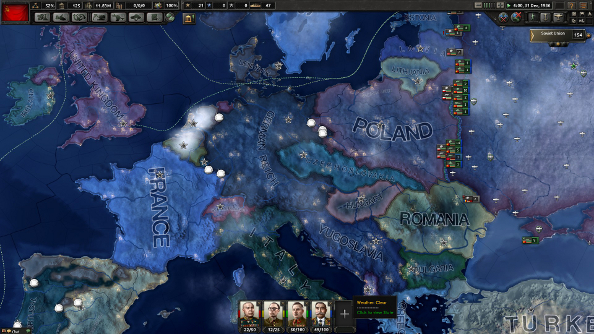 It’s this huge, sprawling game that also requires a great deal of focus, punishing the meandering way that one might play a game of Crusader Kings 2, where you can spend a few years making friends and arranging marriages, ignoring long term plans. It promises the freedom to change the outcome of the war, to dramatically alter the history of the world, but the game still sprints towards a fight between Axis and Allies – everything is subservient to that central conflict.

So it’s a game of dichotomies, with big ideas clashing. There are still plenty of features in development, and Paradox Development Studio is grappling with a lot of different questions; important questions like how to many playing a minor power meaningful. Everything I saw could change, and many things have since I saw it in January.

The concept, however, remains as exciting as it was when I first saw the game in action over a year ago, and the fairly unrestricted access I got to it over the course of two days revealed what it could become, especially now that Paradox has delayed its release.

Argentina was my first charge. Unlike CK2 or EUIV, Hearts of Iron is all about the major powers. Great Britain, Germany, The Soviet Union, the important nations are the driving forces behind the game, and minor nations like Argentina are just along for the ride. A lot of what I ended up doing involved waiting for my Axis allies to do things. 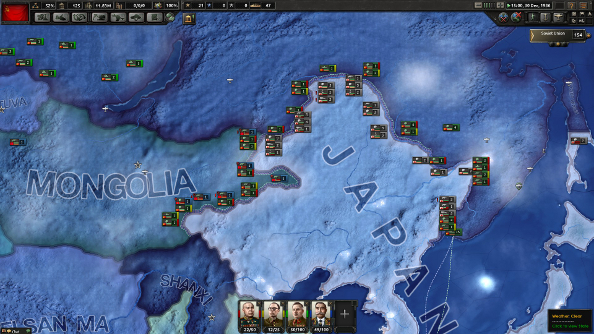 I couldn’t declare war on anyone because I didn’t have a justification. Getting a justification on my neighbour, Paraguay, would take over a year, and I also needed world tension to be high. Tension ramps up as nations collide and start making aggressive moves, eventually leading to World War 2, so I had to wait for my chums like Italy and Germany to make their big moves in Europe and North Africa before I could mess around in South America.

Minor powers like Argentina don’t get unique idea trees – the system that allows players to customise their nation – but the generic tree is still rich in options. I couldn’t declare war until tension rose, but I was still able to move Argentina down a specific path. I chose to enhance my army with infantry ideas, and I also decided to make Argentina fascist.

As well as being a clash of nations, World War 2 was also a clash of ideologies: fascists, capitalists, communists; liberals and authoritarians; Eastern and Western cultures. Since I was siding with the Axis, fascism seemed like a no-brainer, and after hiring fascist political speakers and supporting the Argentine fascist faction, a coup kicked off (bloodless, thankfully) and a new, fascist, leader was installed.

Once World War 2 began, my newly fascist Argentina finally had a reason to invade its neighbours (helped by an unlikely ally, Brazil, who had betrayed the Allies), but it had no real impact on the war itself. There was nothing I could do to help my German or Italian allies in Europe, as the indomitable forces of France, Britain and the US smashed them to pieces.

It wasn’t even the end of the first day, and the Allies had already basically won. 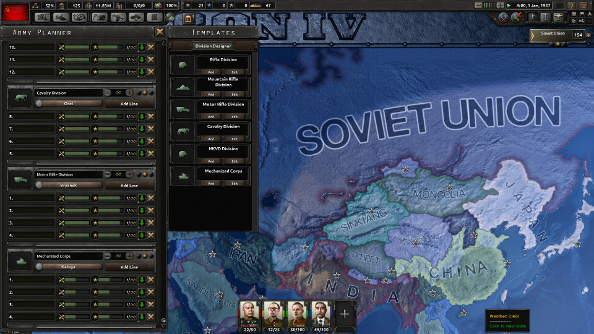 A new game was set up, this time letting me play World War 2’s dark horse: The Soviet Union. Being put in Stalin’s shoes was like finding an oasis in the middle of the desert. A horrible man, he may have been, but he certainly had a lot of options. After playing as Argentina, I was ecstatic to have the opportunity to make a mark on the world.

My goal as the Soviets: make everyone communist. I wheeled and dealed throughout the room, attempting to make my own faction much more appealing than the Axis or Allies. I thought it was working, honestly, but I was terribly wrong. I’d managed to make the Australians completely communist, but they remained part of the Allies, and when I eventually decided to push into Poland, my southern chums fought against me along with everyone else.

That’s the problem with Hearts of Iron IV’s freedom, at the moment. I kept coming up against a brick wall that I couldn’t smash through. I was able to make other nations communist, but they remained stuck in their preassigned factions.

It certainly made for a big war, however. Germany and Italy had been crushed, but the Allies then had to contend with the great Russian bear. I was facing two wars, actually, because Japan and China were carving up the east. With so many factories churning out tanks and equipment, I was holding off the Japanese and pushing far into Poland. Thanks to some early decisions I’d made, where I imprisoned and executed potential traitors in the ranks, my forces were considerably stronger than they had been in 1936, at the start of the game. 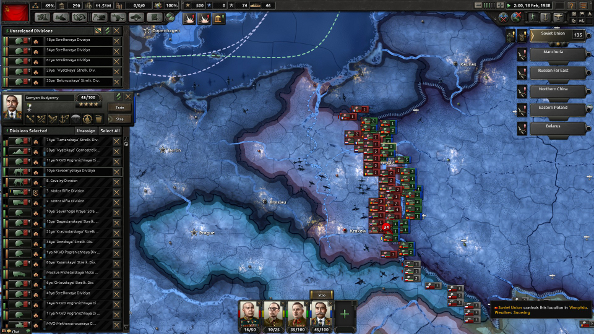 Heart of Iron is blessed with a brilliant military system, in concept.

Soldiers are trained and then equipped with gear being constantly churned out by factories, and then have to be attached to a commander so that they can participate in battle plans. Plans are painted out on the map, as soldiers are ordered to make defensive and offensive fronts. They’ll patiently wait at the border until plans are executed, and then they will march and fight their way to their destination, pushing the border forward. Everything in that area is brought under the control of the attacker, bolstering resources and manufacturing. It’s elegant and simple, pushing nations into conflict as they attempt to secure more and more precious resources like steel and rubber.

The concept and its execution are still worlds apart, though. This is partly because I found the countless stats each unit had impenetrable, and half the time I couldn’t make head nor tail of what I was seeing on the screen. The interface needs work, especially when managing air forces, because there are far too many steps and lots of dragging, dropping and clicking, which becomes extraordinarily tiresome when you have hundreds and hundreds of aircraft.

Despite feeling a little lost, I still managed to swallow up half of Poland while the Allies attempted to hold me off. In other grand strategy games, that would have been the time where I start to think about ending the war. I had what I wanted, and there were issues in the east that demanded my attention. Unfortunately, in this build, it’s all about total war. More diplomatic options are in the works, but without them, I had to continue marching on, biting off more than I could chew, killing and losing millions of soldiers. 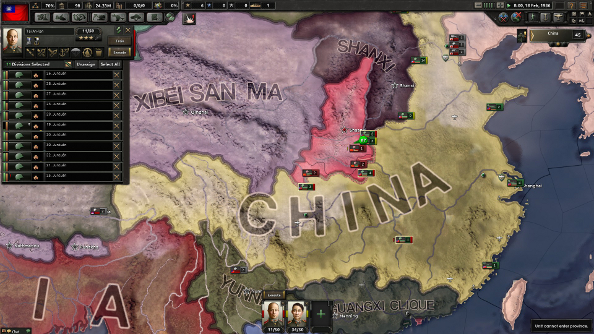 When you’re at war, that’s your entire focus. Trade is effectively dead because the war’s essentially killed off the world market, diplomacy goes into hibernation, and industry solely exists to feed the war machine. Half of the game is sent to the bench to wait for the war to be over, and when it is, that’s probably the game over, too.

The tables turned and the Allies managed to push me back, even taking Moscow and Stalingrad from me. With the Soviets on the run and the Axis destroyed, it was time for our third and final game. Lamentably, I made the mistake of choosing China, who ends up in a no-win situation with Japan very early on. China has two options: agree to be Japan’s puppet, or go to war with Japan, lose and become it’s puppet. I opted for the latter, and found my already limited options curtailed even more.

I feel like I’m still waiting to see what Hearts of Iron IV will be. It’s hard to get a bead on it when it’s still very much in development, and its big ideas are still being fiddled with. I know what I want it to be, though: a game where there’s more for every nation to do internally, where it doesn’t feel split into two, disparate halves when war begins, and where the developers have found the sweet spot between freedom and historical authenticity.

Travel and accommodation was provided by Paradox Interactive.