So, you want to know about the new Hearts of Iron 4 meta? With the release of Hearts of Iron IV’s No Step Back expansion, the WW2 strategy game has changed in several significant ways, and we’re not just talking about HOI4 supply. One of the stated goals of the free 1.11 patch that accompanied it is to shake up the grand strategy game’s previous – stale – meta of specific division templates and combat widths.

It’s safe to say that things have changed, that’s for sure. Whether this new meta will get as stale as the old one remains to be seen, but early indications suggest that there are more viable options now, especially with the new supply system making larger divisions less useable than they used to be.

If you’re a veteran looking for the topline on what’s new, or a new player trying to understand the conversation and whatever the hell a 40/20 is, we hope this guide will help you get up to speed on the Hearts on Iron IV No Step Back meta.

Hearts of Iron 4 meta – No Step Back

Below we shall explore two key concepts associated with the current Hearts of Iron 4 meta – combat width and division templates, as well as some sections dealing with specific queries such as the new floating harbours. We shall expand this guide with new queries and information as time goes on. 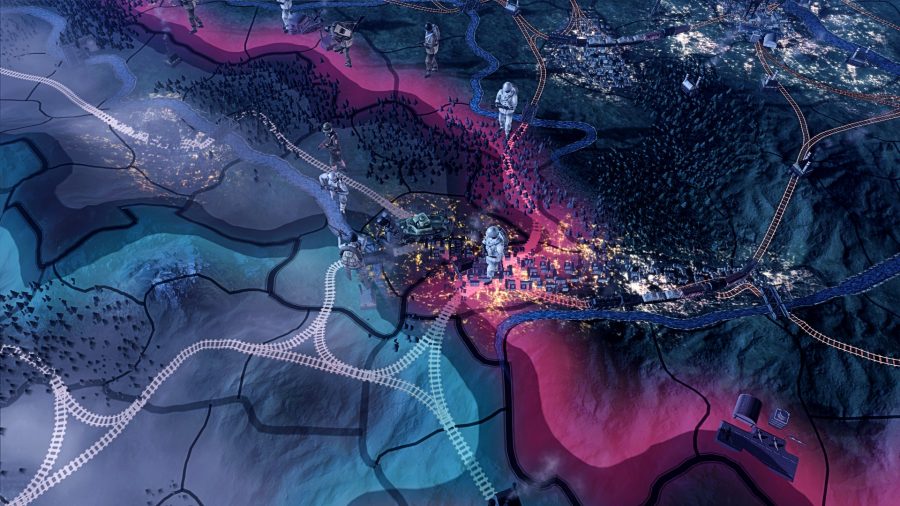 The ‘combat width’ of a division is determined by how many battalions a division has, and what type they are. It’s a stat that acts as an expression of physical size, and represents how much ‘room’ the division will take up when fighting on the frontline.

Provinces in Hearts of Iron 4 also have a ‘size’ that represents the maximum amount of combat width that can be present at any one time per side. So if two opponents are fighting over a province, they each get a separate allotment of combat width as dictated by the province.

If the total combat width of divisions fighting on the frontline exceeds the maximum cap of a province, then divisions will be placed in ‘reserve’ until the number is brought under the cap. These reserve divisions then join the fray under a separate set of rules.

As of the 1.11 patch, province width is as follows:

The ‘reinforcement width’ mentioned refers to a situation where the attacker is attacking a province from more than one location. When this happens, the combat width of the province the battle is taking place in is increased per additional avenue of attack beyond the first one.

As an example: If an attacker is advancing on a defended Forest province from three separate provinces. The combat width will be 84 + 42 + 42, for a total of 168, which both sides get to fill up as separate allowances. Certain techs, doctrines etc. can reduce the base combat width of various battalions. For example, the ‘Mass Assault’ doctrine tree has options that reduce the combat width of infantry battalions from 2 width to 1.6 width. 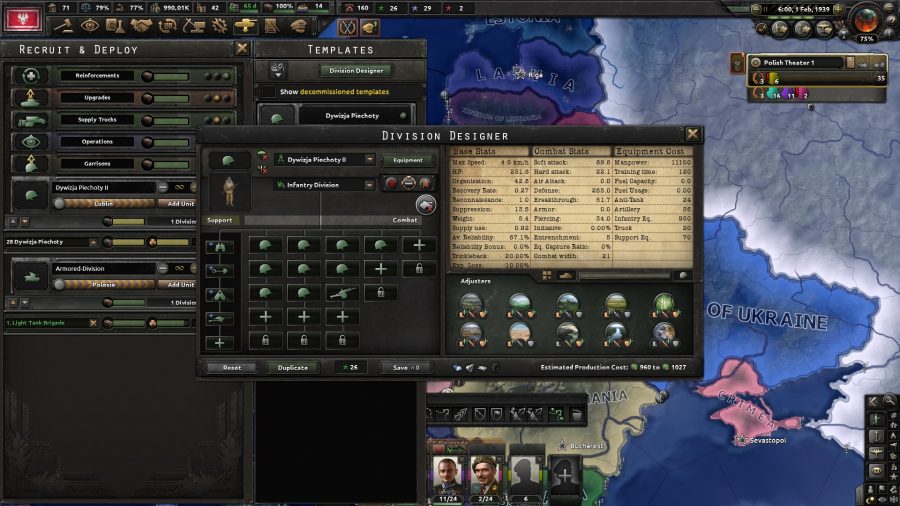 Hearts of Iron 4’s smallest independent combat unit for land warfare is the division, however the game offers a template designer that lets you choose what battalions it comprises. This will determine its overall stats, such as combat width, but also health, organisation, hard and soft attack, and so on.

Division templates are often talked about in the context of the Hearts of Iron 4 meta, which determines what the ‘optimum’ division template looks like. You can of course create any kind of template you have the resources to field. The old meta used to dictate that divisions of combat widths 20 or 40 were the best, because of the old province sizes.

With the province size changes, there’s currently less certainty over what kind of width is now ‘optimum’, but numbers such as 24, have been thrown about, with 12 at the lower end and 36 at the high end, mainly because they’re the most divisible numbers. This is still being explored, however, so watch this space.

Beyond that, there are also some thoughts around the optimum composition of a division template as well. For example, the old 20-width meta for infantry divisions typically extended to suggesting that you have seven line infantry, and then two line artillery, for the best mix of stats (with some default support company options as well).

With the overall combat width meta in flux, the optimum template is also a bit up in the air as well, but generally speaking the current consensus seems to be to use a similar mix of line battalions for infantry. Tank and motorised divisions operate under separate schools of thought. 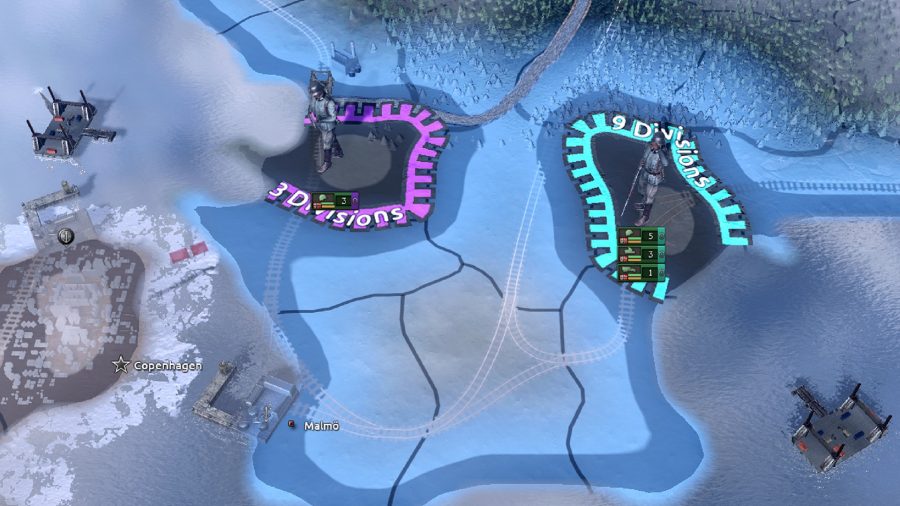 The No Step Back expansion introduced a new premium feature called a Floating Harbour, otherwise known as ‘Mulberry’ harbours. These are artificial docks that were most famously deployed after the D-Day landings off the coast of Normandy, to make it easier for ships to offload supplies without a dedicated port.

In Hearts of Iron 4, these function largely the same – they are a temporary structure that is placed after a successful naval invasion which will act like a port, allowing your nation’s supply network to feed supplies to the the province like it would do via a regular port, saving you the need to capture one specifically if you don’t want to.

Floating Harbors are unlocked with the Landing Craft naval technology in the 1940 slot. This then unlocks a second variant of the naval invasion army plan, which uses the new harbours. Make sure you select that option instead of the vanilla option, and once your invasion force has successfully landed a model should appear in the adjacent sea zone.

Please note, the floating harbours are temporary and will eventually expire. 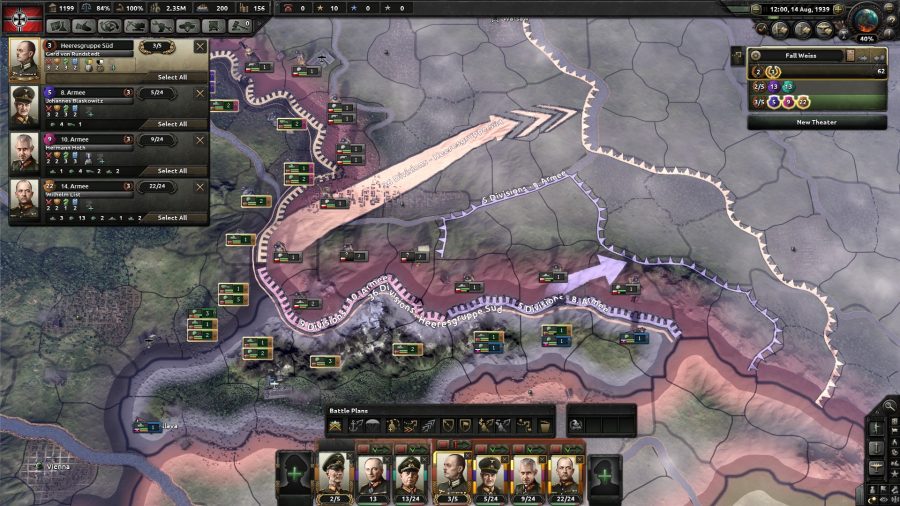 Air supply in Hearts of Iron IV refers to the ‘Air Supply’ mission that can be assigned to Transport Planes, provided you own the Waking the Tiger expansion. Each Transport Plane that isn’t intercepted and shot down will deliver a small amount of supply to the selected province(s), which can be used by any divisions within that province.

It’s an incredibly powerful feature, especially with the new supply system, and enough transport planes can keep a sizeable amount of troops stocked. This makes them especially useful for supporting paradrop operations, and keeping encircled divisions from getting destroyed, as they would otherwise be suffering severe ‘out of supply’ penalities.

Please note that the 1.11.4 patch has nerfed Transport Planes by reducing their supply carrying capacity by around 80%, as well as increasing the fuel costs of supply missions, so they won’t be as viable as they used to be at the kind of scales prior to this update.