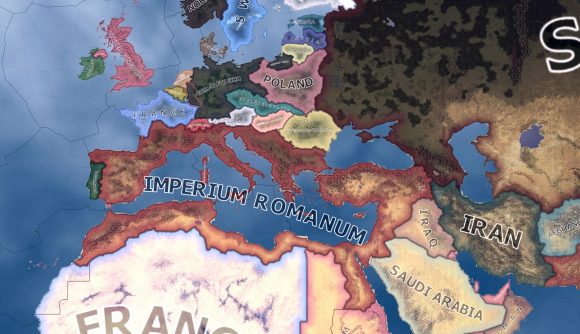 Speedrunning as a videogame phenomenon is not something we talk about often in strategy games, although, by design, grand strategy games do lend themselves to the craft. We’ve previously reported on one fan’s speedrun in Crusader Kings III, and now a new one has cropped up in Hearts of Iron IV.

User CrossMountain has posted a run on the HOI4 subreddit in which they managed to re-form the Roman Empire by October 20, 1936, which is just shy of ten months after the game starts. In this timeframe they fight two wars, and take over enough of Europe to be able to trigger the event that lets you bring back the Imperium Romanum.

Like most Paradox Development Studios titles, Hearts of Iron IV provides goals in the guise of formable nations. Some are authentic or at least historically plausible, but others are just for fun. The Roman Empire formable nation is a bit of a meme at this point, as it gets put into nearly every PDS game regardless of whether it’d make sense or not (like during WWII).

You can read a breakdown of the key beats of CrossMountain’s run in the reddit thread, although they also created a video with a more detailed breakdown:

You can form the Roman Empire in October 1936. Here’s how [Ironman/Guide] from hoi4

You can also go to the Hearts of Iron IV section on Speedrun.com to see the verified listing, credited to one m3aneapolis.

CrossMountain mentions that to achieve the date of October 20, 1936, you really need to do things in a specific order so as to exploit certain mechanics as far as possible. Generally, it’s very doable to form the empire before the end of 1936 even if you don’t follow the instructions exactly, but it’s not known at the moment whether you can beat that October 20 date.

Hearts of Iron IV is currently working towards a new expansion – No Step Back – which is coming with some pretty neat changes for warfare. There’s not going to be a dev diary next week, but stay tuned for an interview with outgoing game director Dan Lind.