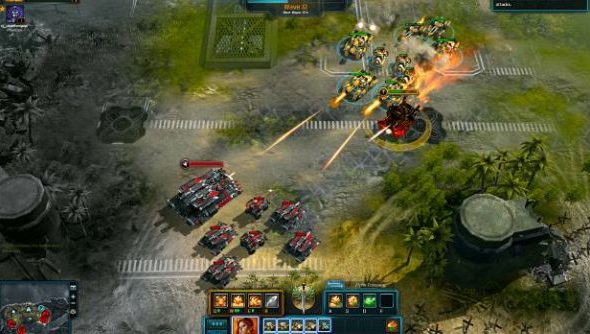 Mark DeForest is CEO of S2 Games, and plays their Heroes of Newerth at the expense of pretty much anything else. In fact, he’s spent the majority of the weekend just prior to our chat doing just that – slaughtering his unsuspecting customers in all three lanes over two-score matches.

He used to be just as dedicated to the RTS, though, so I have to ask: what does he think of where the genre is now, if it’s anywhere at all?

“Is it dead?”, he replies. There’s a pause. “I’d never want to come off as a sour individual, or being salty about something, because negativity breeds negativity and I certainly don’t want to make other people negative by reading potential comments in the story.

“But I’ll say this – I’m really disappointed about where RTS went.”

“I’m disappointed that how they were developed led to the fact that they’re just not very prolific right now,” DeForest went on, “and the fact that if we see any new games coming out it’s extremely rare. I would never go as far to operate in definitives and say, ‘Oh it’s dead’, but it certainly feels like it’s on life support given that it doesn’t have a lot of new content being pushed into it.

“But you never know,” he added. “Maybe somebody will try to pick up all the pieces off the ground and reassemble something that is reminiscent of what an RTS really, truly should be and bring something to market. Wink, wink.”

That’s a pointed hint that S2 might turn their hand to the genre in the future, in case you missed that. DeForest thinks there’s room for a canny developer to wash away the excess complexity and information dump Bibles of the latter-day RTS and begin anew.

The conversation swings rather neatly around to End of Nations – the traditional, if massively multiplayer, RTS that Trion recently re-developed as something resembling a MOBA. What does Deforest make of that, when one genre overwrites the other?

“They’re different games to me,” he says. “RTS’ and MOBAs should be able to co-exist – they need to co-exist. There needs to be traditional RTS’ made and they should be well done to the point where they can garner an audience.

“I love the MOBA market, that should be apparent – that’s the game I personally choose to play, we have one in the market and it has helped our company become what it is. And we’ve chosen to make another one.So I really can’t blame people for wanting to do it. But that should not be a sign to anyone that that means they can’t co-exist.”

It seems to me that MOBA pioneers like DeForest are in a similar position to Pixar in the ‘90s – inadvertently responsible for Disney’s abandonment of 2D animation in favour of CGI, but not particularly happy about it. In the end, it was Pixar’s own John Lasseter who began commissioning 2D films again as chief creative officer at Disney. Perhaps that’ll be Deforest at S2, rebuilding the RTS in the manner he’d like to see it.

What about you? Are you happy with where the RTS is at these days?