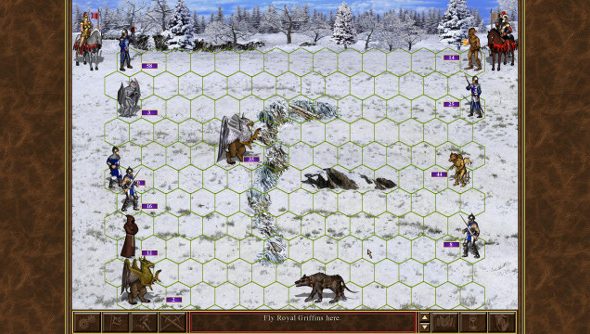 Heroes of Might and Magic 3 – HD Edition is a handsomely restored relic of an earlier era. From the tacky prerendered cutscenes to an interface laden with cryptic buttons, it does not disguise its archaic origins. But its charms are timeless. Just as it was 15 years ago, Heroes of Might and Magic is an ideal fantasy strategy game whose simplicity masks demonic difficulty.

This HD edition is a great way for newcomers to encounter it, although it is not perhaps the comprehensive edition that fans deserve.

You can look at almost any part of Heroes of Might and Magic 3 in isolation and find something so simple that it seems almost trivial. Looking at those individual pieces, it would be very easy to think that Heroes of Might and Magic could gain a little more depth if only it were slightly more complicated in one way or another. In 20 years, a lot of its imitators have stumbled over this exact impulse.

Heroes of Might and Magic plays out across two layers. The first is the strategic layer, where you move heroes’ armies around a vibrant and cartoony 2D map and manage your towns and cities. Only heroes can command armies in the field, and they run around collecting treasure and visiting places of interest, like a witches’ hut where she’ll teach your caster-heroes a new spell, or a mercenary camp where your heroes will receive a bonus to their attack rating.

The managerial aspect is dead easy. Each town has its own alignment, which determines what kind of units you can buy. So a Castle-type city produces classic medieval soldiers like armored crusaders and fantasy standbys like the magical monk, while a Necrpolis-type city is themed around the undead. You build new buildings in each city using a mix of several different resources, then recruits new units from those buildings with gold (and a few special ingredients for special units). 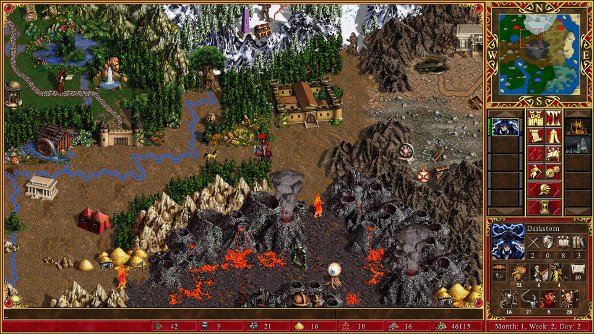 Then, when you put those units under the command of a hero and take them into battle, the tactical layer comes into play. The two armies draw up on opposite sides of a small hexagonal grid and fight. There might be a couple terrain tiles that block units from passing through, or slow them down, but overall it’s a very simple combat model. Heroes cast spells to buff their troops or harm their enemies, and the unit types trundle around trying to find favorable matchups.

This is the part of Heroes of Might and Magic that has been copied most often. The King’s Bounty games basically took the tactical battles and made an entire game out of them, and the Elemental series from Stardock went with a similar approach for its tactical battles. It’s not a surprise. The HoMM tactical game generates perfectly bite-sized battles. There is just enough space that maneuvering units is important and can offset numerical advantages, but the battlefield is compact enough that units can’t dance around too much before joining battle and resolving combat.

While they’re distinct parts of the game, however, the strategic and tactical layers in Heroes of Might and Magic 3 are used in perfect harmony with one another. 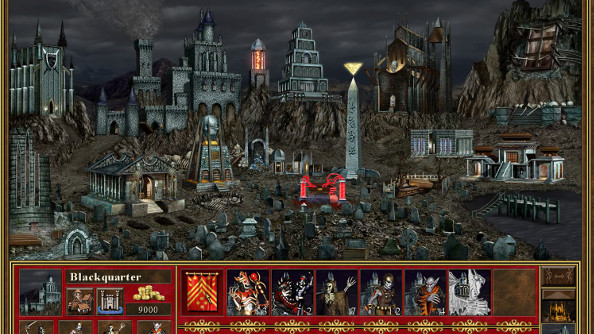 In isolation, or if the balance weren’t perfect, the tactical battles would be shallow and repetitive, or simply not important enough to justify playing. The Elemental / Fallen Enchantress games, for example, never quite worked out how to balance their huge 4X ambitions, where cities can churn out legions of troops and technology, with these pint-sized combats.

In Heroes of Might and Magic 3 HD, however, you’ll find that each part of the game is intimately connected with the others. On easier missions or on lower difficulty settings, you can simply buy all the units you can and steamroll your way across the map into the enemies’ towns. But outside of those intro levels, that strategy completely falls apart because resources are too tight. You never have enough gold to build a “stack of doom” type army, and you always have too many things you need to address. Your city needs upgrades so you can field better troops, but you also need an additional hero on the map so you can defend your resources. Except there’s a big enemy army marauding around out there and you need more troops if you’re going to slug it out with them in battle.

When things are that dicey, your performance in battle becomes very important. If you win a battle but let your delicate casters get mauled by the enemy’s cheap melee units, you might have lost a crippling amount of firepower. Those losses are especially difficult to replace because your production buildings only spawn new units at the start of every week. So if you lose 10 casters and you only produce three every week, you’re not going to be at full-strength again for quite some time.

There’s never so much complexity in HoMM3 that the game gets bogged down in math or micromanagement, but it is a game that forces you to think hard about every single decision you make, because the ramifications are so multifaceted. Oftentimes I feel like I’m torn between the axiom of “teach a man to fish” and the immediate problem of immediate, ravenous hunger for more soldiers.

If there’s a problem with HoMM3 it’s that the mission design is sometimes a little too much about putting my goals in conflict with one another. As the game progresses, it sometimes feels more like I’m being asked to surmount a bunch of speedbumps at the start of a mission before the real right begins. And if I don’t handle those speedbumps just right, I end up losing the mission because the AI is hopelessly ahead. 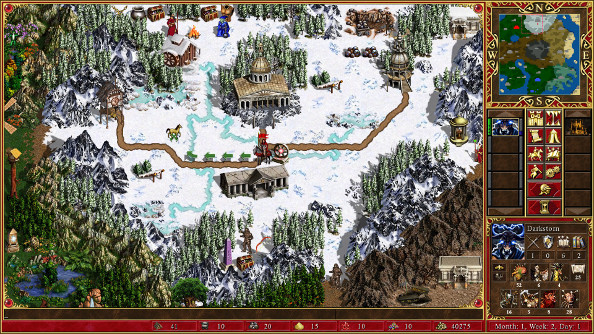 The tricky part about reviewing this HD version of HoMM3 is that there’s a perfectly good version of the game, complete with all the expansions, over on GOG. With the addition of an HD mod, you can get a pretty high-quality HoMM3 experience with even more campaigns and options, for less money.

But I have been pretty impressed by the quality of this release, which seems to make me an outlier. I did have one major issue where all my save files got corrupted, which cost me a lot of campaign progress, but I was never able to replicate the error. I simply haven’t encountered any of the other issues users are complaining about, which is always a difficult position. The HoMM3 HD I’ve read about online is a messy, botched remake. The one I played is actually terrific. Even multiplayer with Fraser, using Steam matchmaking, went swimmingly.

Heroes of Might and Magic 3 HD is a good example of bringing an old classic into the modern world. The art looks perfect, capturing both the chunkiness of the original game’s sprites but also their storybook beauty.

I’m pretty happy with this version of Heroes of Might and Magic 3, but it is a bit harder to recommend when the Complete edition is on GOG with even more missions and a map generator.I can cheerfully recommend it to people who may never have encountered the game before. But if you’re a Heroes of Might and Magic fan, who never needed high-definition anything to enjoy these games, then the chances are that GOG already had you covered, and there’s not much for you here.