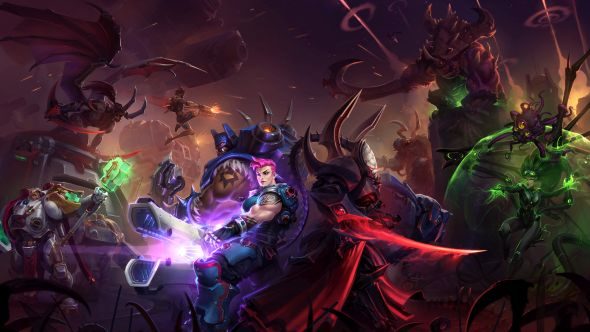 Heroes of the Storm got the most love at Blizzard’s Gamescom announcements today. It’s getting a humongous update over the next few months titled Machines of War. This includes a huge amount of StarCraft-focused releases, including a new hero, new skins and maps based around it. To celebrate, they’ve released three – yes, three – trailers showing off everything that’s new.

For more from gamescom, check out our frontpage for the latest PC games news.

First up, here’s the cinematic trailer that gives a brief glimpse at the heavy hitters:

That’s Kerrigan’s new legendary skin, incidentally, which looks swish as hell and only slightly incredibly silly in Ultralisk mode. At least the excellent John de Lancie – or an accurate impersonator – is back to voice Alarak.

At the end there were the new maps, and here’s a more thorough showing off of how they play:

Finally, here’s a full rundown of everything that’s currently in development, including Alarak and Zarya’s abilities and all the new skins and mounts:

Thunder God Zarya. I’ll be needing that in Overwatch sharpish, Kaplan, yeah? A little more over on the official site.