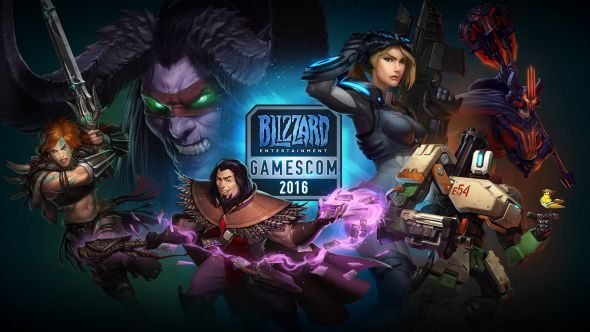 Update: Blizzard have announced a massive amount of upcoming content for Heroes of the Storm, StarCraft and Overwatch.

In their Gamescom stream, Blizzard showed off what’s next for Heroes of the Storm, StarCraft and Overwatch. For Heroes, two new characters – including Overwatch’s Zarya – and StarCraft-based maps. StarCraft is getting some new co-op content with maps and commanders, as well as cosmetic packs. Meanwhile Overwatch got a new map, a German castle called Eichenwalde with a lot of verticality and it was confirmed that a whole second season of Overwatch shorts was on the way.

Heroes of the Storm is getting:

Original story:The creators of WoW, Overwatch and much more are going a bit all-in on Gamescom this year, treating it to as much scheduling and developer presence as their own Blizzcon event. Blizzard have got a five day schedule of community events, much of which is being streamed, and there’s interviews, mini-announcements and world debuts peppered throughout. Here’s a little guide to what’s on when.

As for what they’ve got coming next publically, here’s everything we know aboutWorld of Warcraft: Legion.

There’s two major announced events. One is the Overwatch Bastion animated short, which is debuting at 6pm CEST / 5pm BST / 9am PDT on Thursday, August 18. This will be shown on the Overwatch Twitch channel.

The other is a full preview of everything they’ll be showing off at Gamescom. This will come in video form to the official Blizzard Gamescom mini-site tomorrow at 6:30pm CEST / 5:30pm BST / 9:30am PDT. The livestream will kick off right here:

Some previews have also already been posted on Twitter:

Wondering what to do at #gamescom2016? We've got it covered. #upforgamescom https://t.co/42xEULOmkkhttps://t.co/Yv4q9FzD0y

Based on those, there’s a little something for every game. Rumours abound as to what that could mean – from a new Diablo expansion to Overwatch’s 23rd hero, Sombra, making her appearance. It could simply be another Legion zone preview, or the next Heroes of the Storm hero – we’ll find out in a bit over 24 hours.

After that, there’s five full days of livestreams from various community members. The streams will be on their personal channels, though expect them to be hosted by the main channel for that game too. Here’s the various special features you might want to look out for, split by game with times in CEST – minus one for British time, minus nine for Pacific:

Given the number of these, it’s doubtful all of them are going to have world-exclusive information, but there will likely be followups on whatever is revealed on Tuesday evening. There’s nothing noted down for Diablo besides some speedruns, so those hoping for more developments in that area might want to lower expectations now.

There are also some non-game-specific events going on, which should be streamed across all channels:

The main Blizzard channel will also host recaps each day at 9:00pm hosted by Mark “Turpster” Turpin and Soe Gschwind-Penski, while the mini-site will direct you if you just want something to watch on a random day. There’s also a load of holes in the schedule, and they’re probably just for switchovers/lunch/panicking, but last time there were slightly suspicious holes in a Blizzard schedule they announced Overwatch, so you know. Ears up.