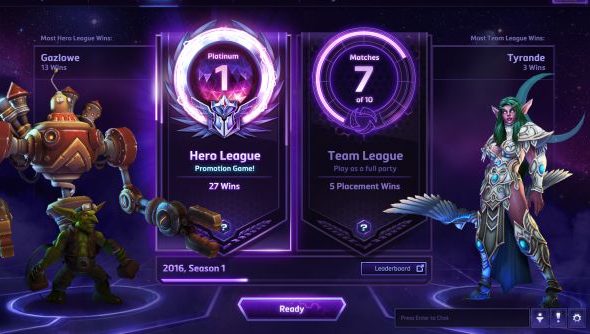 It’s been a long time coming, but Heroes of the Storm’s first proper season of ranked play will begin on June 14. Accompanying this is a huge overhaul of how the ranked systems work to make them a bit more like League of Legends, as well as a couple of new hero reveals – Chromie and Medivh, a pair of Warcraft-based mages.

Have a look at our interview with Dustin Browder about these changes and more, for a little depth.

First, the new heroes. Chromie and Medivh. The former is dragon trapped in the body of a gnome, and is the glass cannon you’d expect from that combo. Blizzard call her an artillery mage, signifying her frankly silly damage and absurd range. Medivh is a little less focused, taking the specialist role and having the ability to teleport him and all his friends around the map almost at will.

They, along with the upcoming skins and mounts, debut in this new video:

Medivh arrives alongside the ranked play changes, but Chromie will be buyable, playable and killable come May 17.

As for Ranked play, the plan is to simplify things. There are now seven tiers, called Bronze, Silver, Gold, Platinum, Diamond, Master and Grand Master. Those first five are split into five divisions each, meaning each player is in, for example, Bronze 3, Silver 5 or Gold 1. You move up through these as you might imagine, so say you’re a newer player placed in Bronze 5 – win a few games, go to Bronze 4, win a lot more games, get to Bronze 1 and eventually promo out to Silver 5. You’re informed when you’re playing a match that might alter your rank, and obviously, losing puts you down the divisions and leagues as much as winning puts you up.

Masters and Grand Masters, meanwhile, don’t have divisions. In Master you’re shown your rank point total for the season. The top 500 of those players will be put into Grand Master and shown their actual rank against everyone else there. Grand Master 43 means you are, literally, the 43rd best player in your region, at least as far as the point totals are concerned. Here’s how all that looks in-game:

To support this, and keep things fair, Blizzard are adding some restrictions on who can party with who. You won’t be able to queue with someone who is more than a league away from you – so Gold can party up with Silver and Platinum players, no matter their division, but not with Bronze or Diamond and above players. For placement, there is no restriction, but note that if your friend is a lot better than you this may be taken away once you’re both placed. On a similar note, players who have been punished with silence will not be able to queue for ranked play until it expires, because they need to be able to communicate to win games.

All these changes herald the start of the first proper season of Heroes of the Storm, starting with the patch hits on June 14 in NA, 15 in Europe. These will last about two months, though Blizzard warn they expect Season One to be a bit longer, presumably while they work out the kinks. This also means season-end rewards of the same sort we see in Hearthstone, including for those who participated in the preseason. While these will often change, for this first transition, anyone who reached the highest rank will receive 4000 gold, a pair of unique mounts, and a portrait. This scales as you drop down, with the lowest ranks receiving just a portrait.