Blizzard have just revealed two upcoming heroes for their MOBA, Heroes of the Storm. Both the Skeleton King “Leoric”, and Diablo’s Monk – the game’s first support class from that franchise – will be coming to the game in the near future.

We’ve got a trailer of them in action below, along with exactly how they work and their abilities.

First up – Leoric. The Skeleton King has a unique trait, which will cause him to haunt the battlefield even in death. When Leoric expires, he’ll turn into a wraith, able to use his abilities, but unable to deal damage. Any damage he would have dealt, will instead lower his death timer. Once his death timer is up, he’ll respawn right at the location of his wraith, ready to fight again.

We’ve also go info on his two heroic abilities. The first, Entomb, will erect a wall around an enemy hero, trapping them and enabling Leoric to wail on them repeatedly. His second heroic is called March of the Black King, which is his signature advancing mace swing – giving him unstoppable and healing him for the damage he does with each swing. 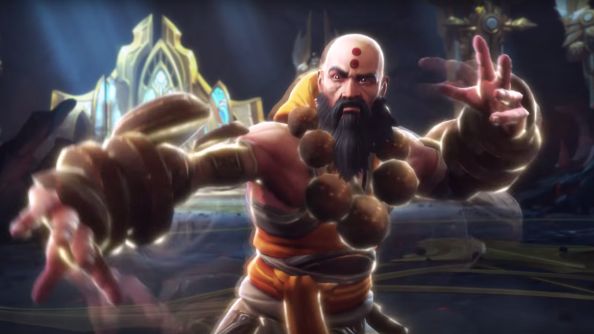 Blizzard were eager to remind us that the Monk is still early in development, but they’re just as eager to satisfy fans with a support Diablo hero. He’ll be mobile and agile, able to dart to enemies and allies alike. He’ll also be a unique hero, as he’ll be the first to be able to chose his trait at the beginning of the game. This will allow him to favour a more attack, support or brawler playstyle.

Check out our massive interview with Blizzard about the Eternal Conflict expansion for further reading.