Heroes of the Storm is released, but it’s no more finished than WoW was in 2004 or Diablo III at 1.0. Any fan will tell you that the first year of a Blizzard game is a transformative time – and that will prove doubly true for their first MOBA.

After a beta’s worth of feedback and three dozen heroes, the dev team have a plan of action: a phased update schedule, with each phase themed around just one of the games that make up Heroes of the Storm’s multiverse. The first begins later this month. It’s named Eternal Conflict, and sources its new battleground and gaggle of heroes from Diablo III. 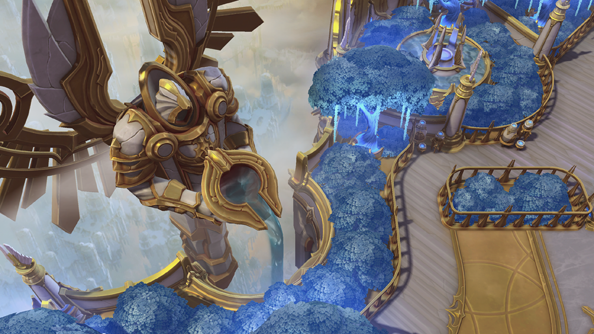 Heroes of the Storm’s launch on June 2nd saw the introduction of Reaper of Souls crusader Johanna. Turns out she’s just the vanguard – heralding a far larger host of biblical visitors to the Nexus.

“We are very much focusing on a Diablo-themed Heaven and Hell content push,” said the game’s senior artist, Phill Gonzales. “We’ve been very, very busy doing a lot of cool things to support this whole theme.”

Work began on the characters and places umbrellaed under Eternal Conflict last year; you might remember a Diablo-themed battleground at BlizzCon, split evenly between light and lava. That’s Battlefield of Eternity – the map Blizzard will roll out to players first.

“This is the high heavens and the burning hells colliding together,” said Gonzales. “We’ve pushed the art as hard as we can.”

Each team takes either the blue-gold or orange-black half of the map, and for that match represents the forces of good or evil. 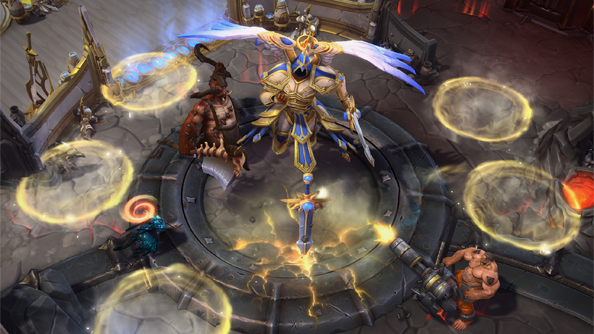 The heaven side of the battlefield is, in Gonzales’ words, “pristine” – its ambient noise straightforwardly ethereal. But as the camera drifts over to brimstone, the background din begins to quaver, like a discordant choir of the tormented.

Two immortals are locked in battle in the middle of the map – flinging flame and fervour at each other across a central clearing. Once in a while, the two will swap position – briefly clashing in a dynamic visual event, before going at it again.

“A giant demon and a giant angel,” said Gonzales. “Just beating the crap out of each other for all eternity.”

And they would go on like this; but players are empowered to break the balance. Every Heroes battleground to date has enlivened proceedings with bosses and collection systems that, if harnessed by a team, will hasten their victory. Battlefield of Eternity finds players tipping the unending battle between angels and demons one way or the other to lend themselves a situational advantage.

Take out the enemy’s immortal, and yours will join you in pushing the lanes. In Blizzard’s brief footage, I watched a single-minded angel smash righteously through the devil’s defences. 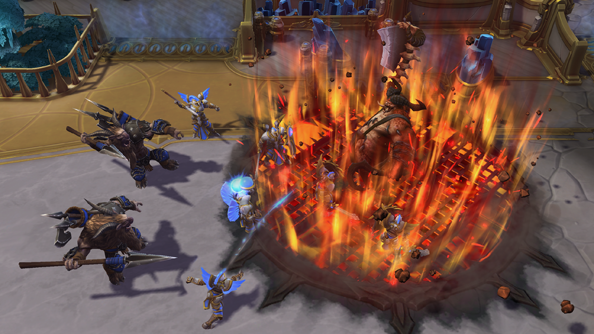 The rest of the map, meanwhile, is populated by more divine and demonic beings.

“In other maps we’ve had mercenaries such as siege giants and knights,” said Gonzales. “This one is all Diablo-themed – we have Fallen, we have goatmen, and they function very differently from what we’ve seen in the past.”

Once players are happily pottering about the Battlefield of Eternity, Blizzard will unchain Eternal Conflict’s first hero. It’s the Butcher – the stitched-together, carver-wielding demon with roots in the original Diablo. He’s a melee assassin, with a Fresh Meat trait that sees him draw a blood resource from heroes, minions and mercenaries – just as goblin mechanic Gazlowe can collect mana-boosting scrap from destroyed structures.

Once the Butcher’s accumulated blood reaches 25 stacks, he’s at maximum power – and the damage boost will feed into all of his abilities. They include Hamstring, which slows enemy heroes; Butcher’s Brand, a life steal; and Ruthless Onslaught, a pursuit. 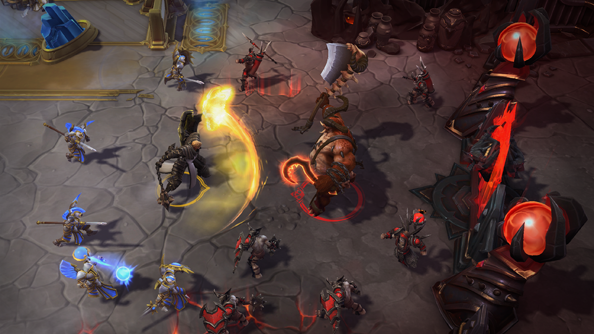 “The Butcher is all about sticking to you and making your life a living hell,” said Gonzales. “You’ll notice his health just chunking up as he health-steals from whatever hero he picks. That in conjunction with his ability to charge around with Ruthless Onslaught just makes him a complete pain in the ass.”

Like every other hero, the Butcher acquires two ultimates at level 10. One, Furnace Blast, is an AOE centered on the demon which can be used to great effect in conjunction with a good old-fashioned charge. And the other is Lamb to the Slaughter, which triggers a grimly inventive sequence whereby a targeted hero is shackled to a post and restricted to a tight radius for a short while – “basically allowing that hero to be victimised by the Butcher and his teammates as they see fit”.

More Diablo III-indebted heroes will follow, including Skellington King Leoric, after Eternal Conflict’s launch on June 30th. And the Heroes team will grant early access to Battlefield of Eternity a week before that in a brand-new public test realm.

“It shows what the Nexus is all about,” said Gonzales of the new map. “Bringing not only heroes but also worlds together.”