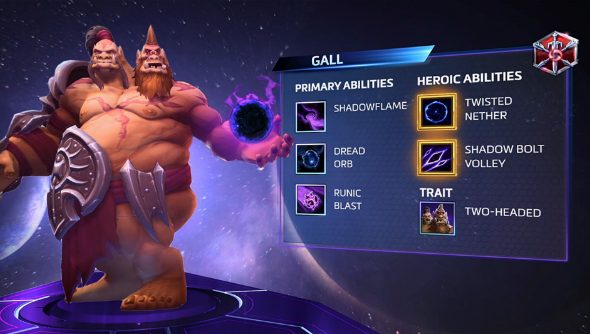 Wondering where to start if you’re getting into Heroes of the Storm? These are the best Heroes for beginners.

Last year after BlizzCon, where the team announced the 3-in-1 heroes The Lost Vikings, they began thinking how could they possibly top this? One member suggested instead of having one person control multiple characters, they have two players controlling one? The idea sounds stupid, so stupid Blizzard used it as an April Fool’s joke in 2004. But after looking at it for a while from their different system designers’ perspectives, they found a way to make it happen.

Cho’gall combines brutish melee warrior with ranged assassin spellcaster. Cho, the brute, controls movement and basic attacks, while is Q and W are Surging Fist (a wind up and charge forward, fist ablaze) and Consuming Blaze (igniting enemies around him in an AOE) respectively. Gall, the mage, is riding shotgun, and can only target enemies with spells. His Q and W are Shadow Flame, a stream of damaging fire, and Dread Orb, a bouncing ball of damage which passes through enemies.

The synergy between them is created by their E, which causes Cho to throw a Rune Bomb, which bounces along on a targeted path, before Gall detonates it when he decides it has reached an appropriate point on its path. According to Hagman, “a unique emotional bond forms when you’re joined at the neck like this,” which makes the hero a very social character to play as.

Even more social, is the method Blizzard have chosen to distribute him via. You can’t unlock Cho’gall through gold or by paying money to the store. Only attendees of BlizzCon, and those with Virtual Tickets, will be gifted Cho’gall. Players must join with an owner and win 2 games as a pair to unlock the hero in their own account, making his proliferation through the community akin to a virus.

To further their unique approach to heroes, Greymane is a result of Blizzard taking the design decision to have a ranged assassin who can finish you off up close and personal. When thinking what that meant, the team immediately began thinking of shapeshifters and, among them, the King of Worgens, Greymane.

His skills involve switching between melee and ranged forms which allows him to jump closer, or away from, the target. And while in these two distinct forms, his abilities change with him, to give him a ranged explosive blast, Gilnean Cocktail, or an arcing melee attack, Razor Swipe. His heroic Go For The Throat allows him to chase down and slay an entire enemy team if low, as if used on a target and the three high-damage strikes kills them, it can be used for free on another target within ten seconds.

The third new hero, Lunara, is a Night-Elf Dryad from WarCraft 3. Her roots in nature are reflected in her abilities, which involve poisoning enemies. She is also the first hero to not have a mount, as her movement skill is a passive 20% increase to normal movement, allowing her to kite effectively. Her movement also occurs in strange bounding patterns, making it harder to land skillshots on her, but slower to traverse the entire map.

Her E skill is another first for the MOBA, as she conjures a Wisp to give vision in an area, which can also be moved around the map at will for the duration of its life. And to further increase her movement advantage, her Heroic, Leaping Strike, can allow her to leapfrog over a target up to twice, doing damge to one, or two targets and moving in and out of a teamfight, or traversing an entire lane in two bounds. She can also use the ability on merc camps in order to jump the walls.

Her trait causes damage over time to anyone hit by her abilities or basic attacks, and her W slows down anyone with that damage over time active on them. Combined with her Talents, which either give her -75% spell shield, or the ability to remove CC or damage over time effects on allies and herself, Lunara should be difficult to deal with.