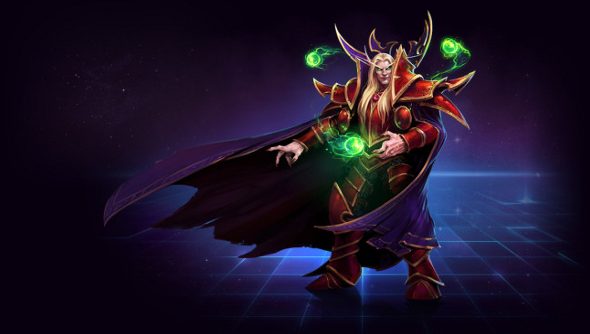 Heroes of the Storm already has a beefy roster of Blizzard heroes and villains, from Diablo to the Lost Vikings, but there’s still a vast array of characters from Blizzard’s 20+ year history that could fit comfortably into the MOBA. So of course more are on their way.

The next hero is Kael’thas Sunstrider, Lord of the Blood Elves and winner of sexiest hair for several years in a row. The rest of Heroes of the Storm’s cast will be receiving changes to balance and functionality too.

Although we know that Kael will be making his way to Heroes of the Storm in the near future, that’s about all we know. Blizzard will be hosting a Q&A on Reddit, however, with hero designers John Hodgson and Kent-Erik Hagman. That’s going to take place next week, on May 12th.

As for the existing heroes, many of them will soon be undergoing some changes. Designer Matthew Cooper has teased some tweaks coming in the next patch. Expect balance changes and reworked talents.

The Lost Vikings, Anub’arak and Abathur will all receive some tweaks, while Blizzard’s keeping an eye on Sylvanas and is considering ways to make her Possession ability more viable.

Diablo and ETC will receive possibly the most interesting of the teased changes. The big red grump’s Storm Shield is getting replaced by a new talent, Lord of Terror. It’s an AoE ability that, when activated, can steal life from multiple enemy heroes.

I was messing around with Diablo when he was in the free rotation last week, and while I enjoyed grabbing enemy heroes and smashing them into the ground and had a grand old time breathing fire at pests, I found myself running away a lot. I did not feel as tanky as I expected to. Now, a lot of that was down to player skill; I haven’t got any experience with him. Blizzard reckons that he could do better when he’s in the middle of a team fight, though, and that’s why they’re giving him this new talent.

ETC’s a favourite of mine. There’s something extremely compelling about rocking out in the middle of a battle and turning a group of enemies into a rapt audience. His new Storm Power, Death Metal, will allow him to rock out even when he’s dead. When he’s killed, his ghost will create an uninterruptable Mosh Pit. Awesome.

What do you lovely lot make of the changes?