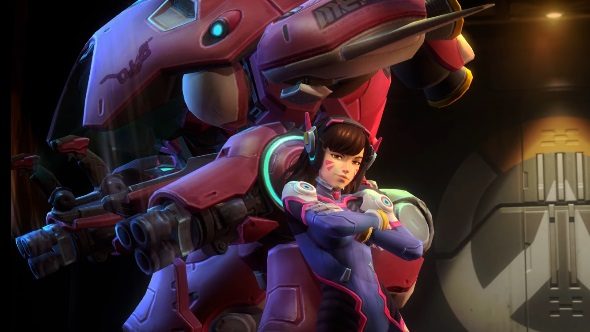 After a brief stint on the Public Testing Realm, D.Va is now available on the American Heroes of the Storm region, with other regions soon to follow. You can check out the full patch notes here.

If you’re jumping back in Heroes of the Storm with the 2.0 update, you’d best know about its lootbox odds.

Also included in this patch is a change to the Battleground rotation system that was recently implemented. Now, there’s a rotation of 9 maps that will change 3 times a season, once at the start, and twice during, so that players aren’t overwhelmed by the sheer number of maps and strategies on each.

There’s also overhauls to the heroes Tyrande, Alarak, and Dehaka. Following a recent Uther rework, Tyrande needed more a unique identity, and has so been worked into a support hero that relies on attacking enemies to reduce the cooldown of her healing ability. Alarak hasn’t seen much competitive play in a while and so needed a bit of a tuneup, so talents have been reshuffled in order to make him more rewarding, and to put more focus on his Sadism passive. On the other side of the scale, Dehaka’s been seeing too much success with just one talent build, so this patch aims to bring down his power a touch and also increase diversity in build paths. We’ll see soon quite how successful these reworks are.

Update May 8, 2017: Blizzard have released D.Va’s official hero spotlight for Heroes of the Storm.

In Heroes of the Storm, D.Va is a ranged warrior who is great at dealing sustained damage and pushing forward during a teamfight. However, like in Overwatch, D.Va struggles to stay alive once she has lost her MEKA and is caught out of formation by the enemy team.

While D.Va retains abilites like her boosters, Defense Matrix and Self-Destruct, her HotS’ incarnation gets two new skills, Big Shot and Bunny Hop. Specific to her Mech Form, Bunny Hop makes D.Va’s mech unstoppable, as it bounces along the ground dealing damage and slowing nearby enemy heroes.

Big Shot is exclusive to her Pilot Form and has D.Va firing a charged laser in a straight line. Big Shot drastically reduces the cooldown for D.Va to recall her mech, so try and hit as many enemies with this ability whenener possible.

D.Va is now available on the HoTS PTR, so jump on if you want to try her out. She is scheduled to be in testing until May 15, and you can check out all the other features coming to the PTR via this post over on Battle.net.

Original story April 25, 2017: The next Overwatch hero to turn up in Blizzard’s big MOBA, HotS, is D.Va, the mech-riding gamer begging for a nerf. She’s bringing her sass and her mech to HotS, and Blizzard are giving her a new Overwatch skin to celebrate.

The Overwatch skin for D.Va is coming next week, portraying her as a robotic supercop.

You don’t have to wait that long for HotS 2.0, though, as that’s live right now in the US, along with Genji. It’ll be 8am in the EU, according to Battle.net.

D.Va will be coming at a later date, but you can enjoy seeing her in action in the lovely new animation above.

Elsewhere, there are mounts, skins, and even Overwatch goodies in the HotS Nexus Challenge 2.0. Have a look at all the goodies in this video: