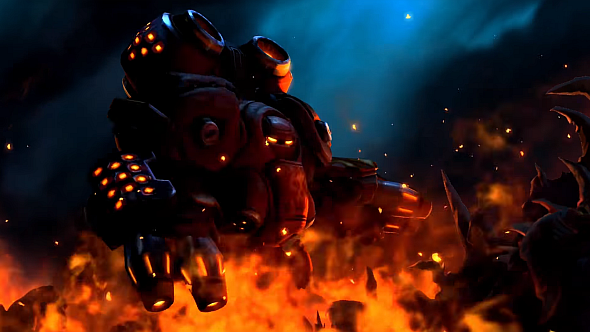 Update, January 2: Blaze is live on the PTR, along with a list of all his talents and abilities.

We knew StarCraft’s Firebat was on the way in January, and we didn’t have to wait long at all to get our hands on Blaze. The new hero is currently available on the PTR, and that means we now have a detailed breakdown of his talents and abilities.

Fancy turning up the heat? Get started in Heroes of the Storm with our guide.

Blaze is a ranged tank, specialized in dealing area of effect damage at a distance. His Oil Spill ability lets him slow enemies, and he can set the slick ablaze to deal damage and provide a healing zone for himself – with the proper talent, he can even do so with a basic attack. Early talents include a variety of stimpack options that give you a choice between damage reduction, attack and movement speed, or cooldown reductions.

You can see the abilities in action through the spotlight video above, or check out the full list of abilities below.

The ever vigilant Icy Veins forum also have a full list of Blaze’s talents.

Original story, December 22 2017: Heroes of the Storm’s latest hero is Blaze, veteran Firebat – as in, the Firebat unit from StarCraft.

Blaze wheels out some classic Firebat quotes (“Need a light?”) in a wintry trailer in which he melts a snowman (“original, or extra crispy?”). The description says he’ll join the Nexus in January, and is “a dual incinerator cannon wielding warrior who excels at area-of-effect damage and locking down an area of the battlefield.”

Firebat is the last character leaked in this list of upcoming heroes, first posted five months ago. It didn’t look too credible then, but has since been borne out entirely.