A Heroes of the Storm pro has earned himself a week’s suspension for not participating in a ladder match, meaning he’ll miss the Heroes Global Championship (HGC) matches this weekend.

Fancy getting in to the genre? Find out which MOBA is right for you.

The issue was raised on Reddit by Genbu_2459, who posted a gameplay clip by streamer Mewnfarez. Mewn was playing in a Hero League (ladder) match with Maksym ‘Mopsio’ Szczypa, a pro player with Team Zealot.As you can see in the clip, Mopsio attacks Mewn’s play before standing in front of their core emoting, rather than lift a finger to defend it from the attacking team. 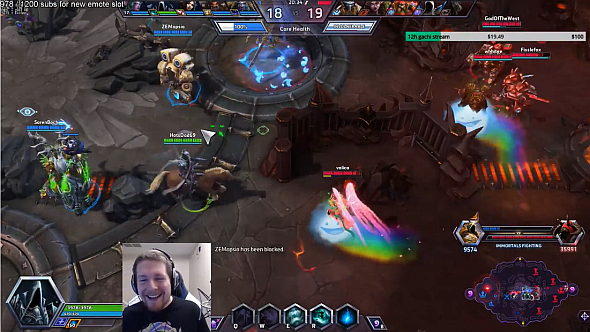 The community flagged Genbu’s thread to Blizzard’s community managers, who took fewer than twelve hours to review the case and announce a response. Here’s their ruling:

“We have looked into the issue and found that Mopsio was intentionally not participating in a Hero League Match on 9/12, which undermines the spirit of competition that is essential to Heroes of the Storm. In accordance with our rules, effective immediately Mopsio will be suspended from play for seven days, rendering him ineligible for play in this weekend’s HGC matches. Zealots will be required to field a substitute player in Mopsio’s absence.

“We’re continually working on making Heroes of the Storm a fun and safe environment. It is deeply important for us to improve the community’s experience both with the game and with each other.”

As top-voted responder Itchiko suggests, it’s great to see that even the pros are subject to the rules when it comes to unsporting conduct.