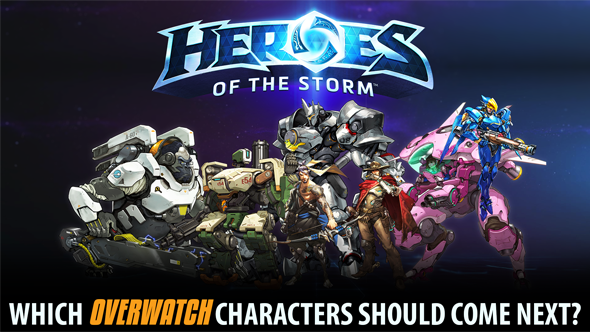 Almost a year ago, Tracer was the first of Overwatch’s cast to get thrown into Heroes of the Storm’s Nexus. Since then, both Zarya and Lucio have been added, but there’s a long way to go before we can really see full teams of Overwatch’s cast duke it out.

For the opposite side of the coin, here are all the rumours and few facts about the next new Overwatch heroes.

And while Blizzard have made it clear some Overwatch characters won’t be making it over to HOTS directly (Widowmaker was deemed too similar in style to Nova, and so was introduced as a skin for the StarCraft Ghost), we think the game is ripe for picking when it comes to new characters. So, here’s 7 of the Overwatch heroes we want to see in Heroes of the Storm. 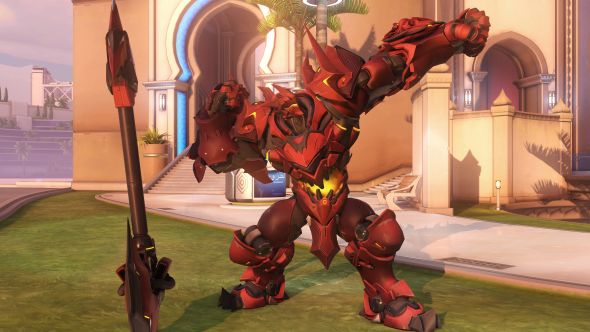 It’s pretty easy to see how Reinhardt could be adapted for a top-down game like Heroes of the Storm. He’d be a perfect fit in compositions that rely on ranged damage dealers, like Valla or Gul’dan. His Barrier Field would be a powerful tool to allow him to prevent ranged enemies from attacking past him, and he’d be one of the more defensive warriors rather than one that dives in himself.

In fact, Heroes of the Storm lacks that sort of warrior right now – while folks like Tyrael can fulfil that niche using one of his heroic abilities, a wholly defensive brute of a warrior would fit nicely into the game’s roster.

Challenges to his introduction are more technical, as producer Claudio Gentilini explains it, “a hero like Reinhardt, [with] his shield – what does it absorb? How much?” Still, it’s a problem to work on, rather than one that scuppers the plan entirely. We’re not entirely sure if HOTS’ horse mounts would be able to hold the weight of all his armour, though. 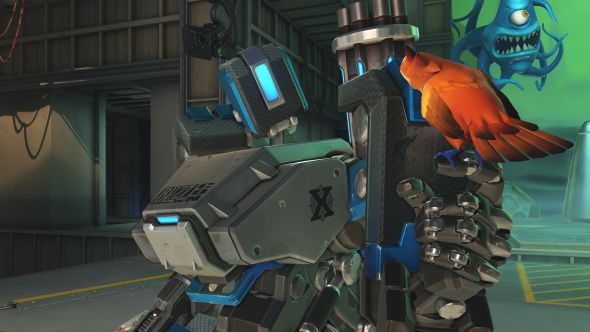 Alright, alright, lots of people hate Bastion. But that doesn’t change the fact that the sentry robot would make for an interesting design in HOTS. With Blizzard trying to cement ‘builder’-type roles through Gazlowe, Probius and Zagara, Bastion would be a nice addition.

They’d be all about locking down an area from a long distance away, and punishing those he sees. Similar to Sgt. Hammer, but instead of being all about sieging structures, they’d demolish heroes. Creating a no-man’s land for the enemy would make for some interesting possibilities with zone control, with the caveat that they need to set up before each fight. 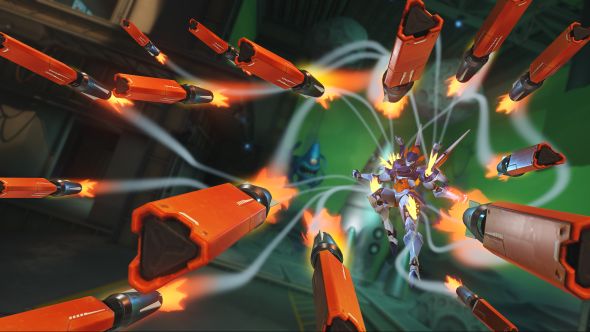 One of the areas in which Heroes of the Storm lacks diversity is basic attack-focused assassins. There’s few strong choices, due to various problems, and Pharah would fulfil her own little niche in that regard: area of effect basic attacks.

Reflecting her rockets in Overwatch, Pharah would punish enemies that group up together with damage that splashes around her targets. Rockets and her heroic ability would cause huge area damage and be almost akin to Jinx in League of Legends. On top of that, Pharah could also be one of the heroes with a unique mount ability: flying over terrain rather than walking around it.

Blizzard have said that “verticality in a MOBA is very difficult” but keeping it to a unique mount could bypass this issue. 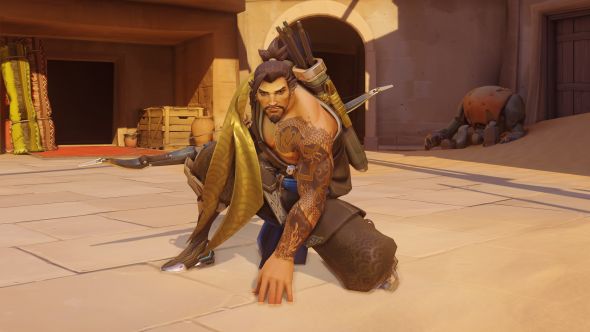 This one is slightly cheating, because some folks actually think Hanzo was teased in the Probius trailer[https://www.pcgamesn.com/heroes-of-the-storm/heroes-of-the-storm-probius-talent-guide-builds] (where did the arrows come from at 1:02? It’s an inside job!), but he also could do something very new: skillshot-based basic attacks.

Heroes of the Storm keeps trying to do new things, and perhaps Hanzo could be the ticket to that. Rather than just right clicking to attack like any other hero, he’d have to constantly be nocking arrows and choosing where to fire them, rather than automatically aiming at wherever the enemy hero is. He’d be a challenging hero to play, but just as rewarding/rage-inducing as in Overwatch when an arrow lands right between the eyes. 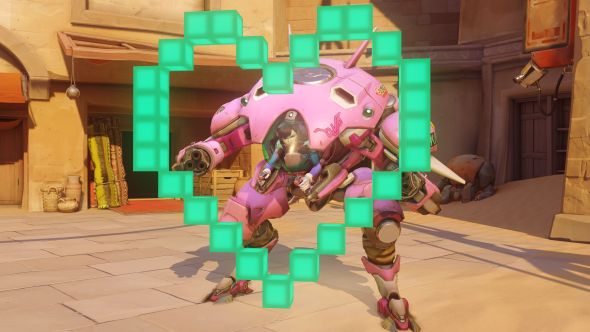 It might make for some interesting world-clashing to have a professional StarCraft player in HOTS, but D.Va’s mech would be yet another possibility for the game to try something unique. Being able to deal lots of damage to the enemy, lose her Mech, and then back off from fights would make D.Va an interesting warrior against other duelist heroes like Illidan.

They’ve already shown off with Lúcio and Tracer that Heroes of the Storm heroes can sometimes move while attacking, and D.Va could also do the same, just as in Overwatch, slowly shuffling backwards as she fires her guns. Just please add the Junker skin. We need it. 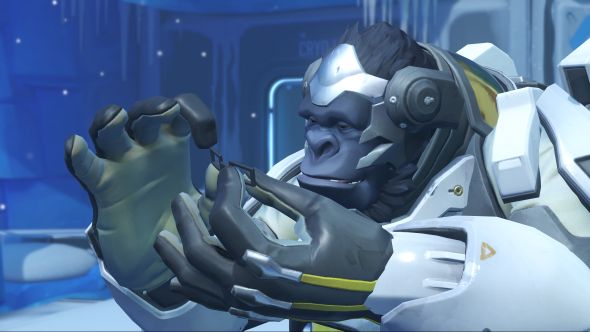 The vast majority of warriors in Heroes of the Storm are based around getting into a fight and causing chaos – Winston would definitely fit that mould. Being able to leap in and electrify the enemy is exactly Winston’s deal.

Perhaps being able to chain those attacks between enemies too – akin to how Thrall’s Chain Lightning bounces from enemy to enemy – would make him a unique warrior in being able to deal heavy area of effect damage once he lands. Meanwhile, his Barrier Projector would be great at making fights difficult for ranged assassins. 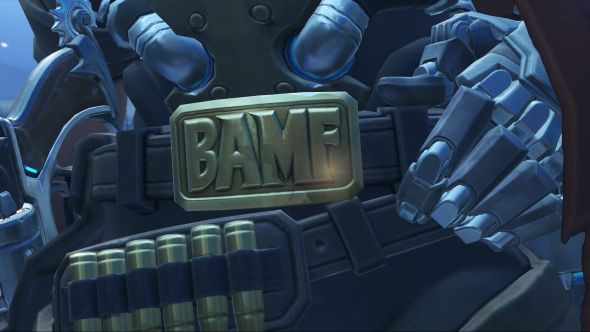 When Tracer was first added to Heroes of the Storm, a completely new mechanic was introduced: ammo. Rather than just attacking at a regular speed, she has to reload her guns regularly. McCree, with his six-shooter, would do well to have the same mechanic.

Loading six bullets into his Peacekeeper every time he reloads, with one ability that would empty the clip as in Overwatch, he’d be a much slower paced assassin than Tracer. But, he’d deal huge single target damage in each shot. Having a range of assassins – those that can jump in and out like Tracer or those that take few calculated shots like our proposed McCree – is important for the diversity of play in HOTS. Plus, at least one of his heroics would be a team-wipe machine.

Who do you think would be a great addition to Heroes of the Storm? Got any ideas for unique heroic abilities these heroes could have? Let us know in the comments below.