Overwatch never stays still for long, and so the question that is always on a Blizzard fan’s lips is ‘who is the next Overwatch hero?’ The original 21 – now 32 – heroes won’t keep everyone occupied forever, and Blizzard has always been upfront that Overwatch would grow, and for free, too.

Overwatch’s most recently added hero, Echo, was released on April 14, 2020 – and according to Jeff Kaplan, Echo is Overwatch’s last new hero until the Overwatch 2 release date, as the team is currently focused on making new heroes for the sequel instead. But that doesn’t mean no new Overwatch heroes full stop – or that we don’t have clues about who the next hero will be, when the time comes.

With Overwatch’s lore told the way it is, through vague hints and out-of-game stories, teases come easily and often from the big blue. Be it a dossier buried in some notes on a map, a name slipped into a blog post, or a long-known character finally being added as a playable hero, there are always hints as to who’s next – and we’ve gathered them all here.

First, a note on release timing: characters are released one at a time, so don’t ever expect to see multiple at once unless something strange goes on. Now, onto the new Overwatch heroes. Remember that some of this is guesswork, rumour-milling and hint-mongering at the best of times, so not all of these will resolve into heroes, if at all – where things are unlikely, we’ll let you know. We’re not expecting to ever see something as mad and long-lasting as the Sombra ARG again, but never say never.

The most recent new Overwatch hero is Echo, a robot with ‘rapidly adapting artificial intelligence’, created by Dr Mina Liao – one of the founders of Overwatch. Her full origin story can be found in the video below.

Echo’s abilities include being able to fly, shoot sticky bombs, and duplicate an enemy hero’s abilities. We’ve been anticipating Echo for a while; concept art closely resembling Echo can be traced back to pre-release, where we saw a full cast roster featuring a character with a near identical silhouette, and concept art for a character called Iris – who eventually turned out to be Echo. 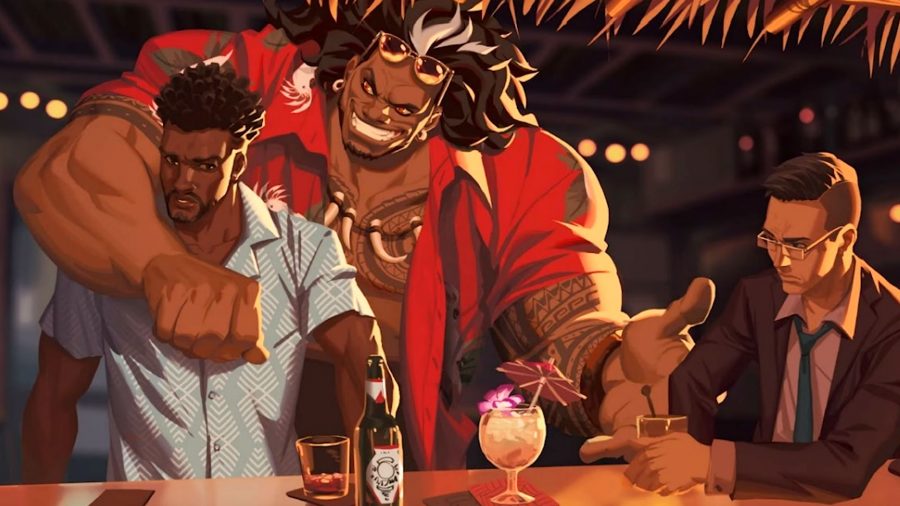 A recent Overwatch comic introduces us to a new Talon character called Mauga. While new character mentions isn’t usually enough to go on, the comic goes into quite a lot of detail when it comes to this new character, even describing aspects like his weapons. Mauga is a close friend of Overwatch hero 30, Baptiste, but is a lot less moral.

There are references in the story to Mauga’s strength and stature, clearly depicting him as a tank, and also a couple of nods to his weaponry. Apparently, Mauga is so strong he can dual-wield machine guns that are cooled by massive tanks on his back.

A promotional trailer for Overwatch’s Archives event introduces us to a potential new Overwatch hero called Sojourn. During the trailer, we’re privy to a decrypted audio message intended for Soldier 76. Within that message, the female Overwatch agent informs Commander Morrison of a new approach to capturing the game’s villain Doomfist.

We know Sojourn will be one of the new Overwatch 2 heroes, and a major character at that – though it seems unlikely, perhaps we’ll see her show up in the original Overwatch one day. 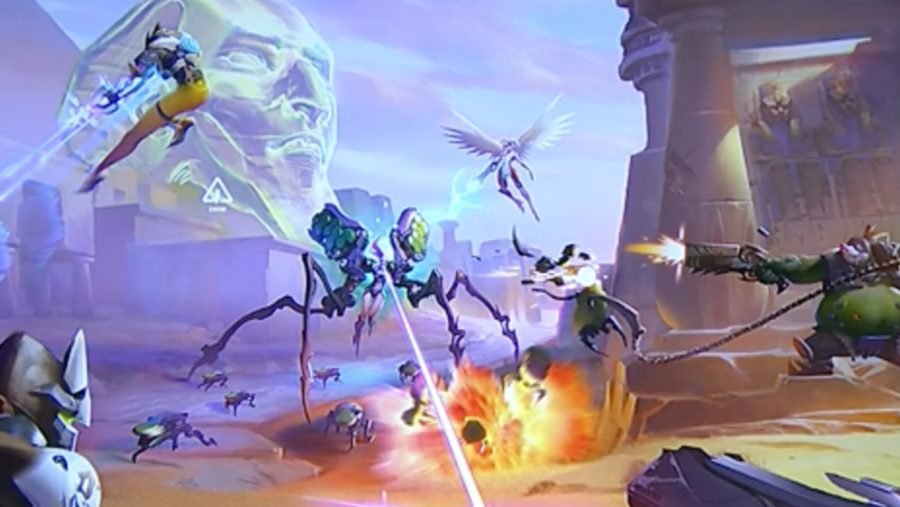 The image above is a very old piece of concept art for Overwatch, which we finally got a decent look at during Jeff Kaplan’s DICE talk in early 2017. In the centre is a strange half-spider, half-woman, laser-spewing baddie who remains the only unidentifiable hero in the piece.

Exactly who or what ‘she’ is hasn’t been confirmed, though Blizzard have dodged any questions about her so far. This old Overwatch art also popped up again in Kaplan’s talk: 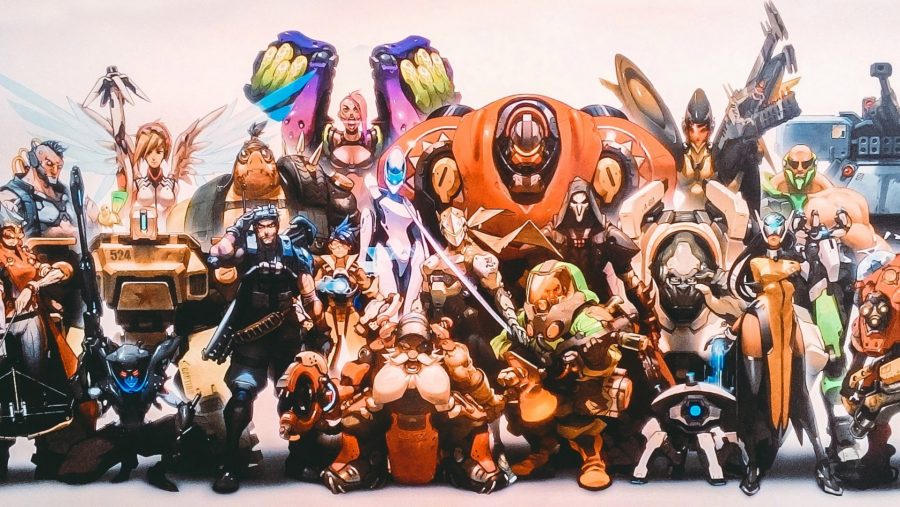 The woman with the purple wings at the back, previously thought to be an old design for Pharah, is the same hero, her legs seemingly unfolding from there. Bastion has multiple forms, so perhaps this is another hero with multiple configurations. Here’s a close-up: 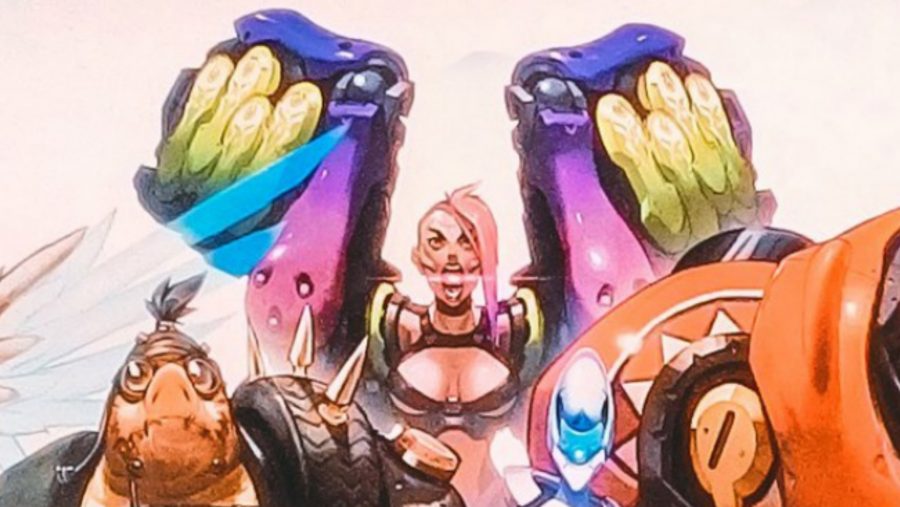 To calm our bonfire a tad, both pieces of art are from as early as 2014, with the second clearly depicting an Overwatch that was far edgier than the version that came to life. Many recognisable characters can be seen there, but equally loads have been totally changed since this time. She also showed up as ‘Recluse’ during the Overwatch Archives panel at BlizzCon 2017.

A lot of the hype for her also came due to confusions between leaked Orisa descriptions and the timing of Kaplan’s DICE talk. Mega-rad as she is, it’s possible she hasn’t been a part of the cast for a long, long time. With such a massive presence in the battlescape art and her odd aesthetic, it would also be understandable if she was more of an NPC boss than a playable character.

Revealed as part of the Junkertown cinematic short and present in a picture on the map itself, the officially unnamed character that rules over Junkrat and Roadhog’s hometown was an immediate community favourite. Here’s the only picture there is of her: 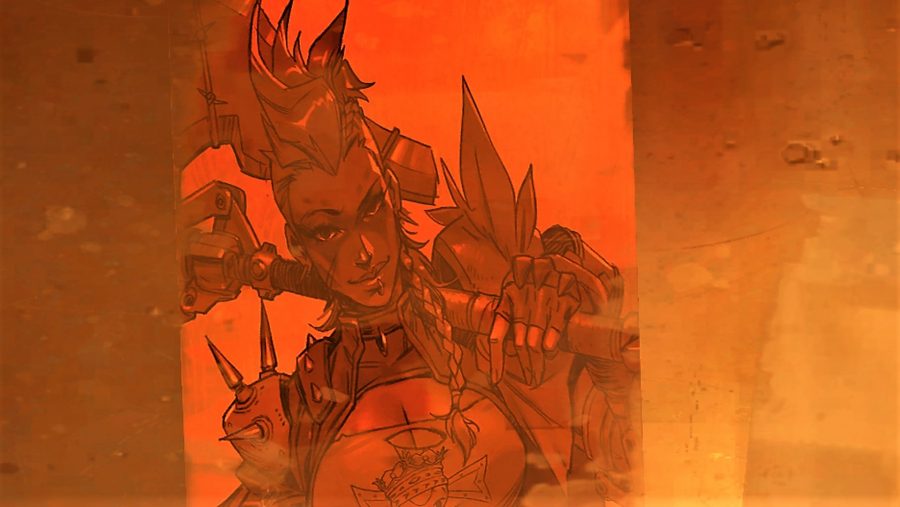 Arguments against it being any time soon are many – she was clearly never intended to get the community so super-interested in this way. She’d also be the third character from the same place, and beyond a bit of voice acting in the Junkertown trailer she’s not exactly fleshed out.

But, community demand affects every game and there’s a lot for the Queen. It may be a long way down the road but we’ll probably see her – eventually.

This is much more of a guess, but one the community has built up a lot of evidence for. Alejandra and her mother feature in the Soldier: 76 animated short Hero. With the focus put on this character – even more so than Soldier himself, despite the latter actually featuring in the game already – many felt it was a hint towards a future hero. Some even pointed to Alejandra and Sombra being the same character, due to both having a connection to the Dorado map. While that doesn’t seem to be true (though who knows with Sombra’s unreliable tales of her own past), Alejandra’s significance hasn’t been downgraded in the minds of some. 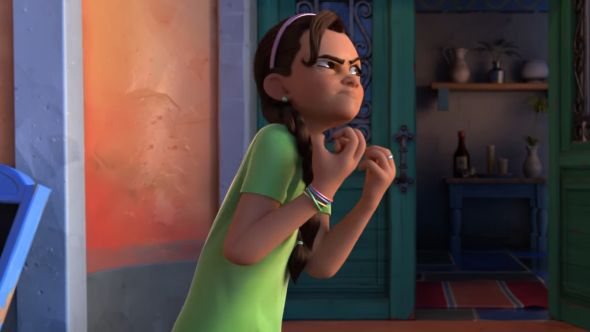 The main issue here is timelines, though Overwatch’s is rather confused as it is. Alejandra’s age is never verified, or when the cinematic short takes place, but the youngest current character is D.Va at 19 – it seems unlikely Blizzard would want to go much younger than that. Of course, having a future version of a character isn’t exactly out of the realms of believability either. Her mother, on the other hand, would dodge that, though is given significantly less characterisation in Hero.

If Alejandra is an upcoming hero, she’s probably a ways off – others have been built up much more, and there are less-finished storylines that still need to play out. Her voice actress, Brigitte Kali, said on Twitter during the Sombra hype that she “couldn’t say much” about future plans with Blizzard. At the time people thought that confirmed suspicions as to who Alejandra grew up into, but Sombra’s voice actress is Carolina Ravassa. If she wasn’t just teasing, it does mean we’ll see more of her, eventually.

Then there are the characters that could become full-fleshed heroes, but there isn’t strong evidence that they will. These are mostly minor characters from maps, comics or animated shorts.

Rather than listing every single character in the Overwatch expanded universe, we’ve cut it down to ones that have a significant enough impact on the world or focus put on them that it’s believable they might make the jump eventually.