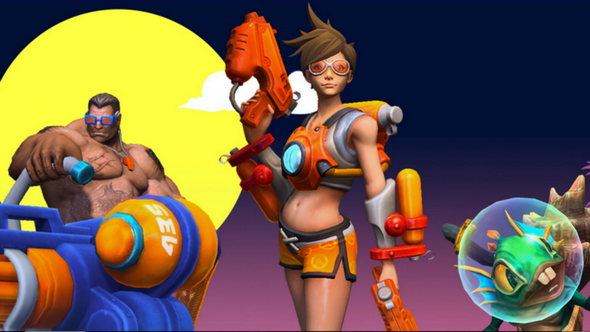 Summer has hit Heroes of the Storm, and with it the “super swole” heroes of the Blizzard universe (Blizzard used the word “swole,” shudder) are working on their tans as well as their fitness. That means plenty of new skins and mounts for you as well as a brawl and a new sweepstakes littered with prizes and chances to win cool stuff.

Tychus gets a sexy beach body, while Tracer gets a new Slip ’N Stream skin, for example, and new Bikini Stitches tints are up for grabs. If you’re more into mounts, there’s a new Surfboardor Sharkbite Surfboard you can pick up as well, in addition to a whole swath of steamy new summer portraits, emoji, sprays, and more. All Loot Chests earned during the Sun’s Out, Guns Out event will contain these special items, including the aforementioned skins, mounts, sprays, and portraits.

The New Brawl, known as Pull Party, will feature 5v5 matches where you’re meant to pull five opponents across the pool without getting tangled up in it yourself. The first team to reach 20 kills takes the goal. You can complete three Pull Party matches to earn a Sun’s Out, Guns Out Loot Chest. Every Brawl will award these chests until July 28.

If you’re more into real-world loot, there’s a sweepstakes currently going on alongside the events that will award one million Loot Chests each week with Rare, Epic, Legendary, and Grand prizes, as well as BlizzCon tickets. You’ll get a chance to win each time you win a game in any mode once per day between June 27 and July 24. Planning on going back to play Heroes of the Storm? All this mounts up to a damn good reason to go back in.