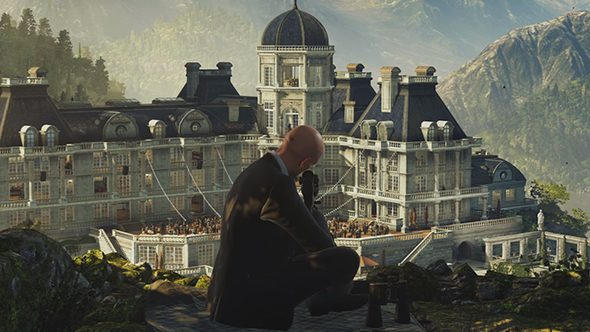 Hitman: Sniper Assassin is a new mode coming alongside Hitman 2, but you won’t have to wait until November to play it. Pre-orders of the upcoming assassination sequel will give you access to the Sniper Assassin mode right now – which just so happens to be Hitman’s first foray into online multiplayer.

You can play the game either solo as Agent 47, or in online co-op as one of two new characters – Stone and Knight. The mission has you looking cliffside over a wedding at a massive villa, with three targets and a host of bodyguards to kill. While you’re locked to a single location for the duration, the classic Hitman clockwork level design keeps this from being a simple shooting gallery.

Murder as you will in the best sandbox games on PC. (You can build some things, too.)

The rifle you carry is silenced, but you still need to keep your long-distance murders from notice – if any of your three main targets flee the scene, it’s game over. You can fire at walls to create distractions, or fire on specific items for more creative results. Blasting the wedding cake makes for an attention-grabbing explosion, or you can fire at a flagpole to signal a meeting, or take out some supports to kill somebody with a falling statue.

Completing challenges, like hunting down pigeons, making skill shots, or other items, adds a permanent multiplier to your score, which makes it easier to level up and unlock new gear and weapons. Different ammo types for your rifle can enable you to shoot through walls, or create massive shockwaves.

Playing in co-op opens up some new possibilities for coordination, allowing you to tag specific targets for your partner. Multiple shots on an enemy means greater impact, so combined fire could send a bodyguard flying with some impressively exaggerated physics. That’s funny enough on its own, but it also allows you to keep a body from falling someplace it might get noticed.

The first Sniper Assassin map is available right now if you pre-order Hitman 2 ahead of its November release date. Further maps will likely be available once the main game launches later this year, and another new map is promised in each of the subsequent expansion packs. It’s not quite a full Hitman experience – check out the Hitman 2 reveal trailer here – but it does look like a fun distraction, especially when it comes to filling in the lengthy wait until November.