Play your way in the best sandbox games on PC.

The first content arrives today: two new escalation contracts, one in Sapienza and one in Bangkok.

Ten new featured contracts, created by the community and hand-picked by Io, will also be added today. Later in the month, the 25th (and second-to-last) elusive target is let loose in Hokkaido.

Finally, there’s a mandatory game update for all platforms, which Io are “very excited to talk about.” How intriguing. More details on that will be shared later.

Here’s the announcement on the Hitman blog. 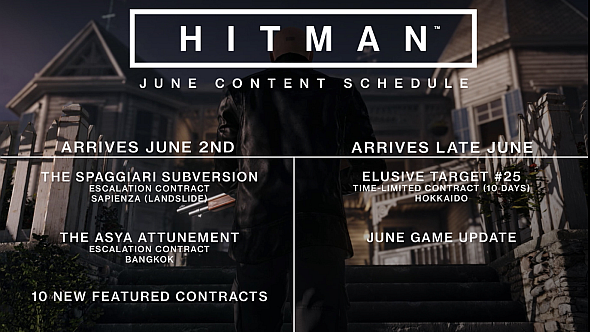 Square Enix dumped Io Interactive last month amid extraordinary losses, despite the relative success of 2016’s Hitman. The future of the studio and the iconic series is still in doubt, but there was a ray of hope in Square Enix’s earnings call last week, which revealed that the company is looking for external investors capable of sustaining the franchise.