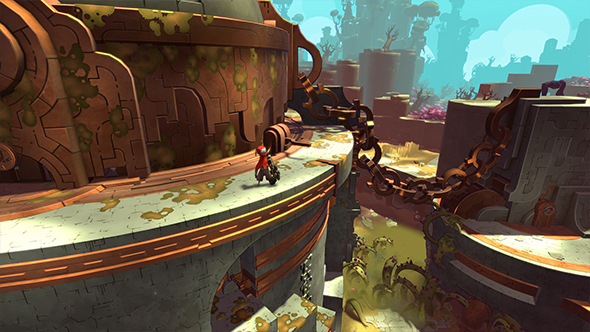 It’s been quite a while since Runic Games have been in the spotlight. Torchlight II released over a half-decade ago – you may recall it stealing some of Diablo 3’s thunder – but they’ve been pretty quiet since announcing their next title in 2015. Well, that new game is finally here, with the Zelda-like Hob making its gorgeous debut today.

Dig into the best indie games on PC.

Hob is a dialog-free adventure revealed by exploration and interaction with the strange world you’re a part of. The planet itself changes shape based on the puzzles you solve, opening new areas to explore and secrets to find.

Despite the shifting environments, Hob is a designed world unlike the procedurally-generated levels of the Torchlight games. “Even before we got into the shifting world,” level designer Patrick Blank says on a PlayStation Blog post, “we wanted to do something that was more crafted and felt like it all flowed really well. It was more interesting for us to make because we knew what the connections were going to be.”

Most of your interaction is driven by a mechanical glove that lets you grapple and warp around the environments, as well as delivering good ol’ socks to the jaws of various monsters. There are swords and stuff too, so combat isn’t all punchy. There are also pretty gruesome deaths amid all the pretty visuals, so look out for that.