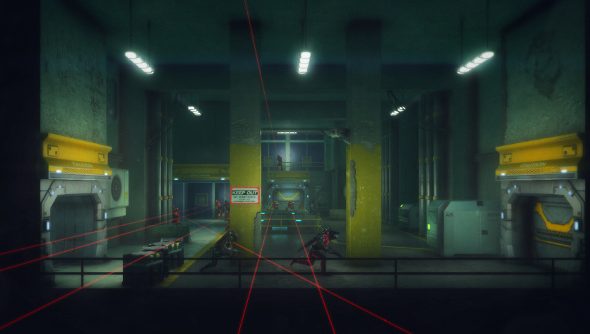 The PC has no shortage of old-school platformers and platforming-shooters (or Metroidvanias, if your prefer), but nothing like what Ruffian Games are doing with Hollowpoint. It’s a class and progression-based platform shooter with randomized missions and over-the-shoulder 3rd person shooting. It’s a gaming cocktail like I’ve never seen before.

Ruffian Games are best known for Crackdown 2, and there is definitely conceptual continuity between Crackdown and Hollowpoint. Both games are over-the-top action games set in a near future dystopia where society has broken down, and shady private syndicates have taken on the role of government. In a nod to shifting fears, perhaps, Crackdown’s criminal cartels are here replaced with your standard-issue amoral megacorps who wage bloody shadow wars against one another.

The details don’t really matter. The bottom line is that you take the role of badass commandos who wear lots of vaguely tactical bling while going on paid missions that involve killing lots of mercenary assholes just like you. As in Crackdown, a big part of Hollowpoint is transforming your everyday commandos into near-superheroes via a huge progression system.

After accepting a mission and choosing a team of operatives (each with a customized set of abilities and powers via Hollowpoint’s extensive skill tree), you are dropped into combat. While you only ever have one operative under your control, you can teleport (i.e. swap) another operative into the mission at any time. So you can dash across a heavily defended aircraft hangar with your tankiest operative, then, as you dive for cover, bring your sniper into play to help clear out the opposition in a hurry. 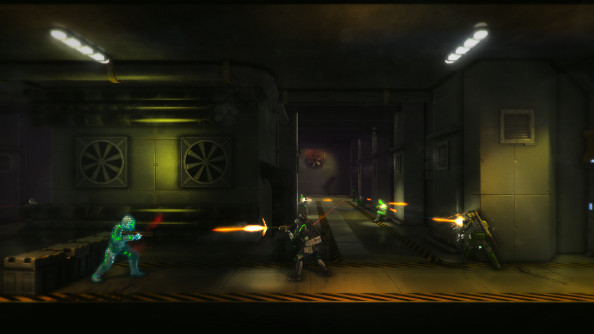 What really distinguishes Hollowpoint, at first glance, is the fact that it’s not just a 2D game. The Unity-powered shooter is divided between a 2D side-scrolling plane, where you can only move side to side and shoot in an arc around your character, and a deeper 3D field where enemies maneuver and fire from the backdrop of the 2D plane. But you can snap into a 3D over-the-shoulder” camera that lets your character face the background and start sending shots “down range”.

It’s hard to describe, but it’s completely natural when you see it in action. It brings out some of the stop-and-pop pacing that made games like Gears of War so satisfying, but without any of the clunky and cumbersome movement that often accompanied cover shooters. Instead, one second you’re running-and-gunning across the level, vaulting onto ledges and catwalks while you pick-off bad guys in mid-air. The next second you’re leaning out from behind a pillar, trading fire with the rocket-gunner in the background who was shelling you throughout your sprint across the room.

Things get even more interesting when co-op play is introduced. During the demo at ParadoxCon, we saw the Paradox producer on Hollowpoint absolutely dismantling the Ruffian developer during the demo, killing about 4x the number of enemies during each run through a level.

But the best part was the way the two characters, and the two layers of the action, interacted with each other. They did things like leapfrog through a heavily defended room, with one character popping into the over-the-shoulder 3D camera to suppress incoming enemies in the 3D layer, while the other character charged across the level to another good cover point, at which point their rolls flipped. 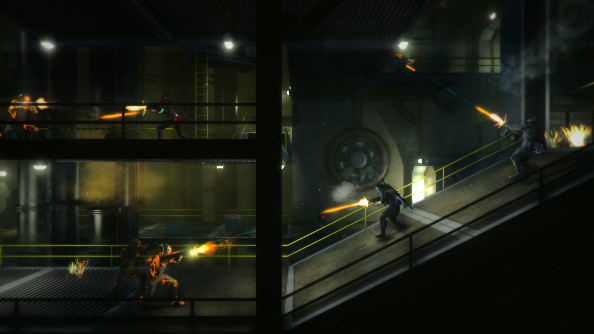 But what was most striking was just the dynamism in display during a run in Hollowpoint. Swapping characters mid-mission, snapping in and out of the two layers, and tackling objectives with a buddy seemed to introduce a ton of variables that unfolded practically at the speed of thought. That only gets more impressive when you consider how much of Hollowpoint is being generated on-the-fly.

Hollowpoint’s missions are not stricty scripted. Rather, they start out with one small script leading to an objective and a procedurally generated map. Then, once you complete the first objective, you get a new objective that’s tied to a different script. But it’s not predetermined. Instead, it’s more like every mission has a branching structure that reacts to a variety of factors, like your performance in the last stage of the mission. While there are going to be a certain number of environment-types, what happens each time you visit them is going to be a roll of the dice. A lot of dice.

There are also little bonuses and rewards you can unlock during your session that are distinct from the skill tree. These are also randomized, and they only persist for the length of your session. Once the session ends, your character goes back to normal for the next time you play. So if you go on a crazy headshot streak, the game might notice that and give you some kind of special reward after your tenth consecutive headshot. Maybe you’ll start doing extra bonus damage on head-hits, or something like that. And that effect, in turn, might stack with other randomized effects, so that your character goes from being an everyday badass to being completely in the zone for the duration of your session.

It’s a recipe for tons of variability and a lot of reasons to keep coming back for your next run, or to extend your current run. WIth a huge skill tree and lots of character customization options, Hollowpoint certainly looks like a deep game that will reward its hardest-core players.

But of course, I never actually touched the controls during the session at Paradox Con, and with a game this unusual, the proof will most definitely be in the pudding. I will say that Hollowpoint is not generally my kind of game, but by the end of the demo, I was dying to give it a try.

Travel and accommodation provided by the publisher.