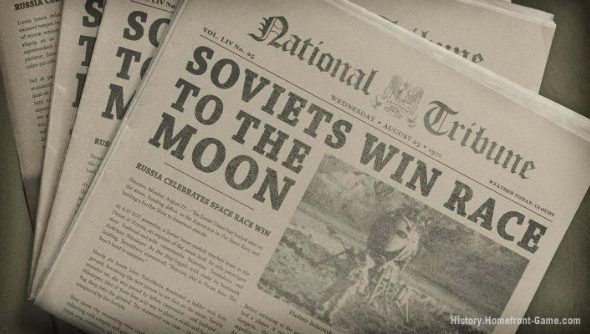 Deep Silver and Dambuster Studios have released the opening cutscene from Homefront: The Revolution, which reveals the events leading up to the fall of America with a lesson in alternate history.

Homefront isn’t out just yet, but you can play our list of PC’s best FPS games while you wait.

The cutscene shows the game’s alternate time-line, tracing right back to the end of the Korean War, showing how a quirk of fate tipped the world’s balance, nerfing American and giving Korea a good old buff.

“The core premise of Homefront – an occupation on American soil – remains unchanged, ” said Hasit Zala, game director at Dambuster Studios. “But we have created a brand new fiction that offers a very different interpretation of how we got there.”

According to the new interpretations, the APEX Corporation (basically Apple) came out of Korea and offered advanced tech like smartphones and tablets for sale around the world. America lapped it up, and when APEX started selling weapons they bought those too, eventually getting into huge debt. When they defaulted on the debt, Korea turned off America’s army and invaded.

There’s a full time-line on the Homefront site chronicling this interpretation, if you care to take a look. Or you could just watch this video for an abridged, less wordy, more moodily-narrated version:

Homefront: The Revolution is due to release on May 17 in North America.