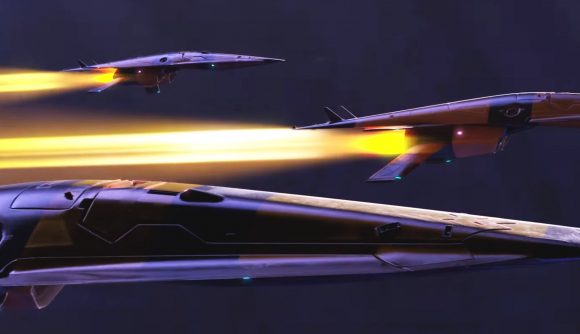 Gearbox announced Homeworld 3 at PAX West last month, following up on their acclaimed sci-fi RTS series 16 years after its last mainline outing. Alongside the game’s reveal, the publisher also revealed a crowdfunding campaign for the game on Fig, which would help shape its development.

The thing is, that campaign was little more than a technicality. Gearbox was asking for only $1 in funding in order to meet its goal, suggesting that it’s already secured funding for the game and is confident in the community’s interest. In fact, pledging to the fund offered potential players the opportunity to help shape the game by partaking in backer-only surveys over the course of the development process.

Unsurprisingly, Homeworld 3 hit its funding goal. Perhaps a little more surprising is the extent to which it did so – with just a few days to go before the campaign draws to an end, Homeworld 3 has already drawn in $1,045,910, which Gearbox CEO Randy Pitchford says is a record-breaking success. Let’s examine that claim, shall we?

The most successful crowdfunding campaign ever was for EOS, a blockchain operating system which earned more than $4 billion last year. If you narrow down that field to videogames, then Star Citizen, which has raised more than $230 million through both Kickstarter and its own fund, takes the crown.

Well, you did it. Records were broken with one-hundred-million-percent of the goal achieved with Homeworld 3 on @PlayFig. If you would like to invest to participate in the game’s potential, your chance will end in a couple of days. Check it out here: https://t.co/T5qJUBwlpv

Limit the pool to Fig’s most successful campaigns, and several titles come in ahead of Homeworld – Psychonauts 2, Pillars of Eternity II: Deadfire, and Wasteland 3 all made in excess of $3 million. So what exactly does Randy mean?

Well, in a tweet last night, the CEO said that “records were broken with one-hundred-million-percent of the goal achieved.” Technically, that’s completely true, although I’d suggest that he’s being a little generous with those figures. Hopefully it’ll lead to a successful development, although all accounts suggest Homeworld 3 is still in pre-production, so fans will likely be waiting a few more years for the new game yet.