The original Homeworld was an unforgettable game. It’s one of those rare works where every single aspect seems to come together perfectly. It’s a game that evokes nothing vivid memories: its haunting musical score, the sight of a plucky battle fleet drifting through the cold enormity of space, and constant, detached mutter of radio chatter in the background as your crews fought for their lives.

And for Gearbox, the strength and intensity of those memories proved a challenge as well as an inspiration. Because they had to remake Homeworld, better than it ever was in reality, but also the exact same way fans remember it.

“You know the [new] Dodge Challenger?” he asks. “So the Dodge Challenger: the team that was working on it ended up going and getting one of the old Challengers. Because they had these drawings! We’re gonna make this! I mean, that car was bad-ass right?

“And they bring it out, and it’s this diminutive, little, tiny, chunky-looking piece of crap, right? And they realized, well crap, that’s not how we remember it. So they basically built that car [the one they remembered]. And I used that story sometimes with the guys here. Because we have to live up to that sort of sensibility. Like, the new Challenger is kind of better than the old car, right? That’s exactly what we need to do with this game.”

Gearbox, according to Martel, went through a similar realization about Homeworld. Initially, they thought it was a question of “porting and polishing”.

“We knew that Homeworld 2 looked that much better than [Homeworld 1]. …Because they’re two different engines, basically, so we needed to take Homeworld 1 and port it into Homeworld 2. So that was sort of step one. ‘How are we going to do that? What are the code requirements. What are the kind of things that we want to do? What are the rendering technologies that we’re going to need to fix to do this stuff?’

“And then, you know, the game came out on CD!” Martel continues. “So all of the videos were really chunky and crunchy. The audio source was very, very heavily compressed. So these are the kind of things that were really obvious, right? And it’s like, well crap, we could improve on these videos! ‘Let’s go get the source and re-export. I’m sure they were done in high-res!’ All this kinda stuff.”

He pauses. “And then, of course, when we actually get the drops, we realize that none of this was true. That the state of the engine was in… You know, it is an old engine. It’s in a state of disrepair. Um, you know, the videos don’t look that good.”

The rose-tinted glasses fell from their eyes as they realized just how much work they needed to do for Homeworld: Remastered to make it live up to their own memories.

Getting the band back together

At that point, Gearbox knew that the game files they had in-hand weren’t going to get the job done. So they started reaching out to a lot of the old Homeworld team for absolutely any original assets they possessed. Many of the developers at Blackbird Interactive (at work on Homeworld: Shipbreakers) are Relic alumni, including the game’s original art director, Rob Cunningham, and Homeworld lead artist Aaron Kambeitz. They are CEO and Chief Creative officer of Blackbird, respectively.

Via Blackbird, Gearbox were also able to get in touch with composer Paul Ruska, who gave Homeworld its unforgettable, mood-setting score.

“Then we learn that …Paul still has the original DAC (digital-analog converter) tapes. He’s got all the stems and everything from the original recordings,” Martel says. So we can really make this sound like the way it was originally recorded. I mean, they recorded with a small symphony orchestra, you know? So it was really high-quality, especially at the time. And it was sad that it had to be so compressed.”

That wasn’t really an option with the cutscene artwork. So Kambeitz directed Gearbox in redrawing the original artwork (and did a fair bit of it himself). Cunningham, meanwhile, consulted on the remodeled ship designs. 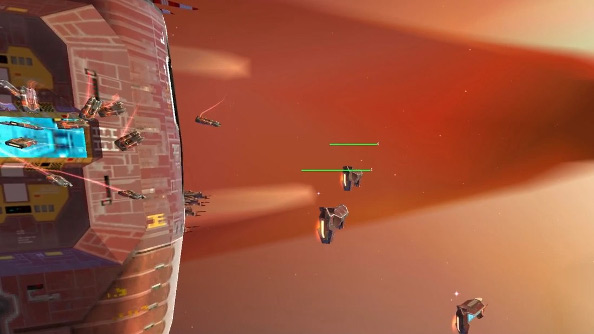 “It was kind of weird for Aaron to kind of go back and think about he would have improved it,” Martel said. “So now all these videos are done at 1080 [and Gearbox have left the door open for 4k], where they were like maybe 640×480 [originally]? I mean, they were really, really compressed. And then, when you start talking to people like Rob about the ships and the backgrounds? It just kind of snowballs into this big effort where we’re going to rebuild all the ships, and repaint the backgrounds. And that’s where people like Rob were really helpful, because they could, in a way, art direct the way they always wished it could have been.”

It wasn’t easy to update the visuals, either. The simple models of the old Homeworld games were memorable and evocative in their own right, and doing too much to them for the remastered version could detract from their elegance.

“Think about these ships,” Martel says. “This is some of the best concept art, the best ship designs, that are being done over the last 16 years.”

The involvement of some of the original team doubtless saved Gearbox from trying to reinvent the wheel.

“I would say we definitely went through these periods of time where we probably overdid this, or overdid that. …And that’s what’s really kind of nice about being able to have someone like Rob and Aaron in the back pocket. They would give us all this feedback, and we’d go away and do all this stuff and then we’d come back and they’d be blown away.” 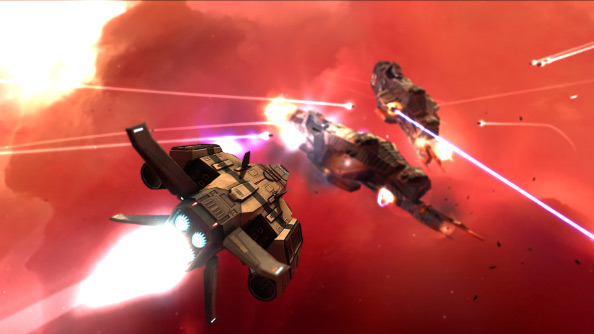 Gearbox cast a wide net. They went through every stage of Homeworld: Remastered by consulting with Homeworld veterans wherever possible, including Relic co-founder Alex Garden (currently president at Zynga). According to Gearbox, one of Martel’s first meetings at Zygna was a sit-down with the Homeworld Remastered team to discuss the project.

That Garden found himself talking about Homeworld again, as his Zynga career began, is only fitting. Homeworld was the game that catalyzed the formation of Relic, and launched Garden on a career that took him to Nexon, Microsoft, and finally Zynga. But it was always a singular game in Relic’s history. They became the Company of Heroes / Dawn of War studio in subsequent years, and never revisited the spacefaring RTS after Homeworld 2 in 2003.

Garden left the studio shortly thereafter and, like a lot of the great game designers of the 1990s and early 2000s, went into social and mobile gaming. But there he was, fresh from filling out his paperwork at Zynga and getting his orientation, and he was talking to Gearbox people about his old masterpiece. Garden may have pursued the social and mobile gaming trends, but after fifteen years, it’s still Homeworld that people want to talk about.

“You know, I think that is a road that should have been explored a little more,” Martel says. “I don’t know why nobody really stuck with it. Or maybe it’s just that it’s kind of hard.” 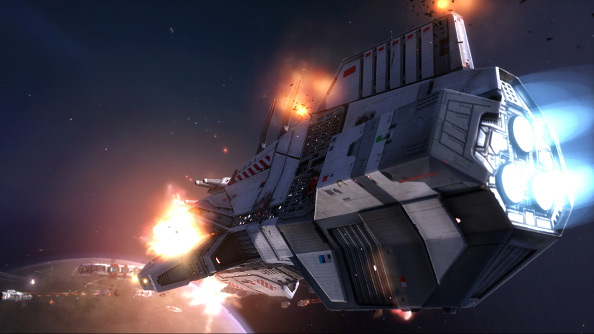 He pauses. “Because that’s one of the things about coming back to this game. The pacing’s really nice. It can be really intense and crazy, but it can also be really beautiful to just follow a ship and see cool shit happening. It’s just amazing, right?”

As much as Martel wants to do Homeworld justice with Homeworld: Remastered, and satisfy the longtime fans, he admits he doesn’t just want the game to be for Homeworld fans.

“I hope we get a bunch of new customers for this. Because, I hope that all the nostalgia guys come along, but I really want to have some young … I would love for the way this affected people? Where they sort of retain this memory? I would love if we got a little more of that for this next generation of game-players.”

With tons of input from veterans, Gearbox were able to create a modern version of Homeworld that, hopefully, will feel entirely authentic to fans while still reaching those new audiences.

“I don’t know how well we would have done without having those guys and their eyes on it. Because they lived it for so long,” Martel said. “And they had all this time afterwards to kind of reflect on it. So we really just tried to treat it with utmost respect at the end of the day, and not screw it up.