Guerrilla’s post-apocalyptic adventure and Playstation’s big new IP of 2017 is making its way to PC a little over three years later. Following PC ports of other high-profile console games such as Red Dead Redemption 2, Death Stranding, and Detroit: Become Human, it’s a further sign that these days, few games stay truly exclusive to their platforms, which means it’s a great time to be a PC gamer. Whether you will actually still want to play Horizon however, squarely depends on how tired you are of the familiar ins and outs of open-world games.

Aloy, a young woman with a mane of fiery red hair, lives in the wilds together with her mentor Rost. An outcast from her tribe, which doesn’t accept motherless children like her, she longs to find out who her mother was and what happened to her. But something else sets her apart – a tiny device that can play holographic data.

This so-called ‘Focus’ allows her to see thousand year-old recordings, but also highlights enemy weak points and tracks, basically acting like an in-game HUD. But Aloy isn’t the only one with this kind of power – when a mysterious tribe of Focus wearers attacks and kills nearly her entire tribe, she sets off to get revenge. Oh, and also find out who her mother was.

It’s not an easily summarised story, mostly because Horizon likes to follow at least three different plot strands at any given time. It never settles any of them, whether that’s political altercations or finding out more about the past or Aloy’s personal story. Characters stay bland and hardly ever become more than quest givers. You’re mostly sent from A to B, likely getting lost among a myriad of optional goals along the way – collect data points, clear bandit camps, kill specific monsters, hunt animals to make into bags for additional inventory space, that kind of thing. 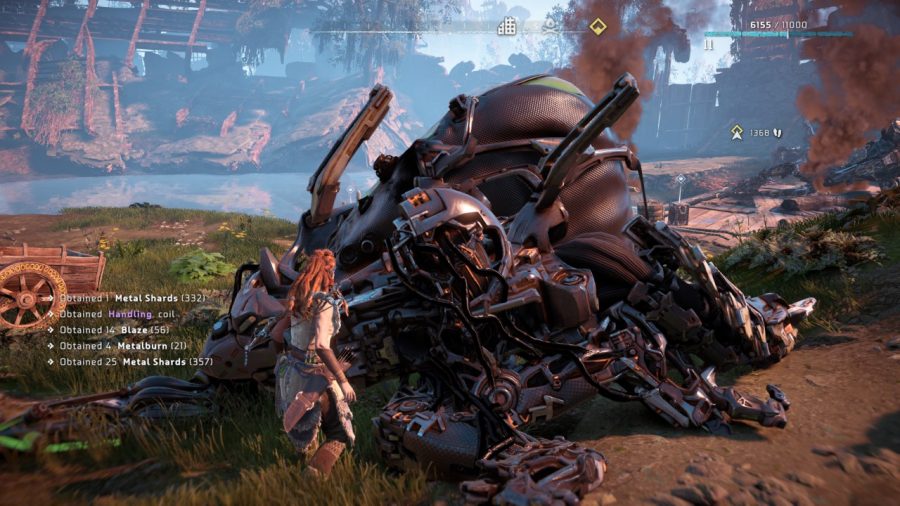 Horizon’s strongest aspect is without a doubt its setting. Overgrown post-apocalyptic America is immensely elevated by the idea of humanity once again starting from its tribal roots. Even though the execution isn’t without its problems, this gives the game its own identity through unique worldbuilding and colourful design. Integral to this are, of course, the machines, which are great purely due to how ridiculous the whole concept is. The machines roaming the land come in the shape of mechanical animals behaving like buffaloes, ostriches, and even crocodiles, but there’s also the occasional dinosaur added to the mix because why not.

It’s the kind of thing only video games can get away with, and fighting any machine is the absolute high point of Horizon. Simple melee is likely to get you killed no matter what your current level is, so Guerrilla devises an interesting toolbox, from slings you can use with explosives to bows that behave almost like sniper rifles, with scopes and elemental arrows exploiting individual weaknesses.

Taking down large enemies, in particular, is always an interesting challenge that you can approach in several different ways. However, you also spend a lot of time fighting human enemies whose AI tends to fluctuate between all-knowing and really dumb with no room in-between. And for a game that near-constantly tells you what to do, to the point of marking every climbable surface with large yellow handholds, Horizon is also not that great at providing clearly legible level design. 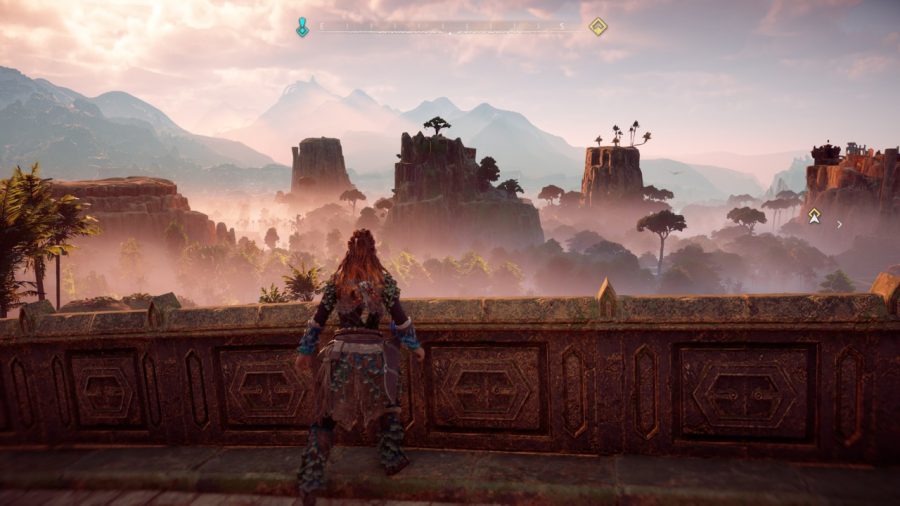 As expected, Horizon looks great on PC. Like the aforementioned recent ports, a lower- to mid-range PC build is going to get you results that far surpass the console version even on modest settings, but the sticking point with Horizon is its beautiful yet resource-intensive map. The version available for review showed some very noticeable rendering issues, which Guerrilla is aware of and working to fix with the day one patch. The first time it loads up, Horizon took twenty minutes to determine optimal settings for my build, only for the results to be slightly conservative.

More like this: Check out the best open-world games on PC

It offers many manual optimisation options however, from shadows to textures to lens flare and grass density, so that even with the lowest recommended system requirements you can achieve 1080p and 60fps. Playing on an i5 with a GTX 1060 and 16 GB RAM, no setting I tried gave me a stable framerate, however: severe slowing occurs on entering new areas and sometimes, albeit rarely, during bigger fights. Textures pop in noticeably when you enter an area for the first time, and a weird flickering texture can appear intermittently. The only big error I encountered was a fatal DXGI crash, but this is easy enough to fix with a quick Google search. 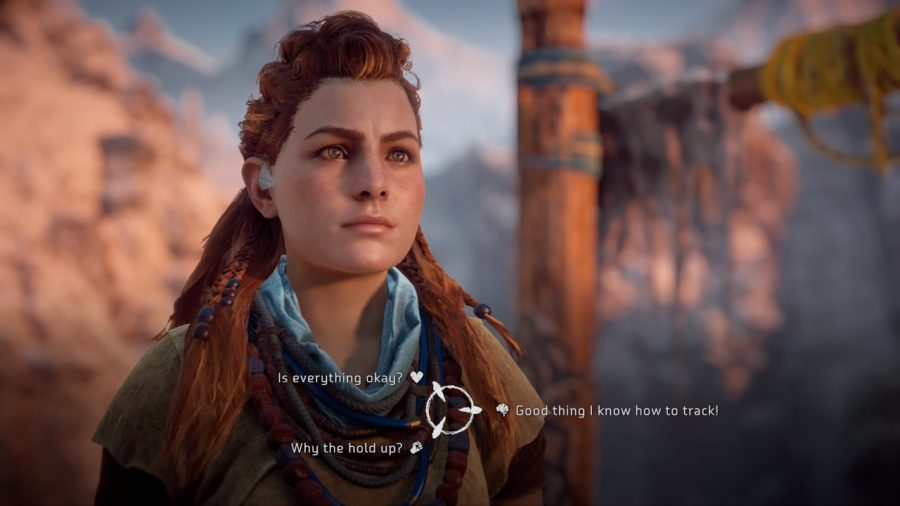 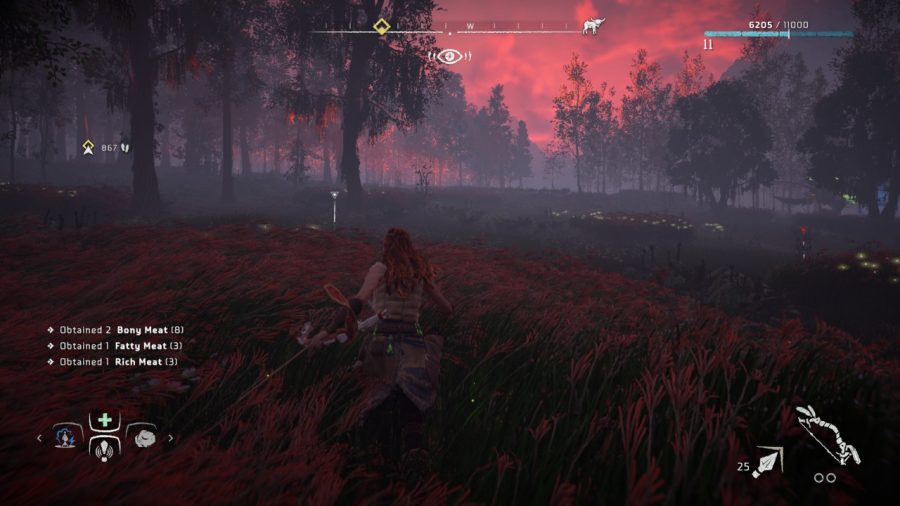 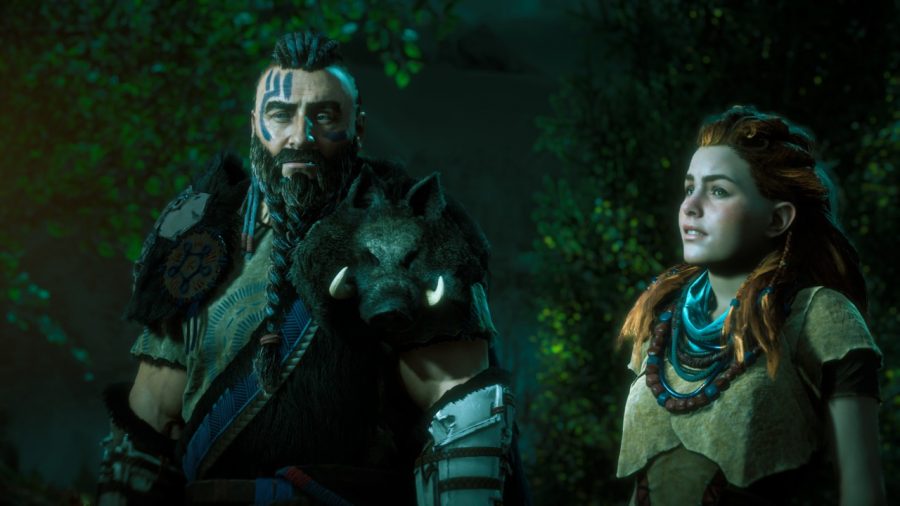 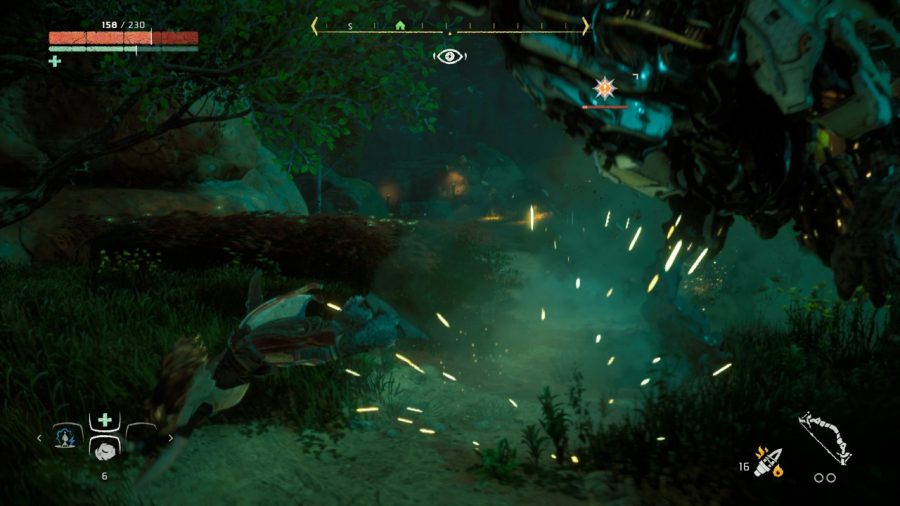 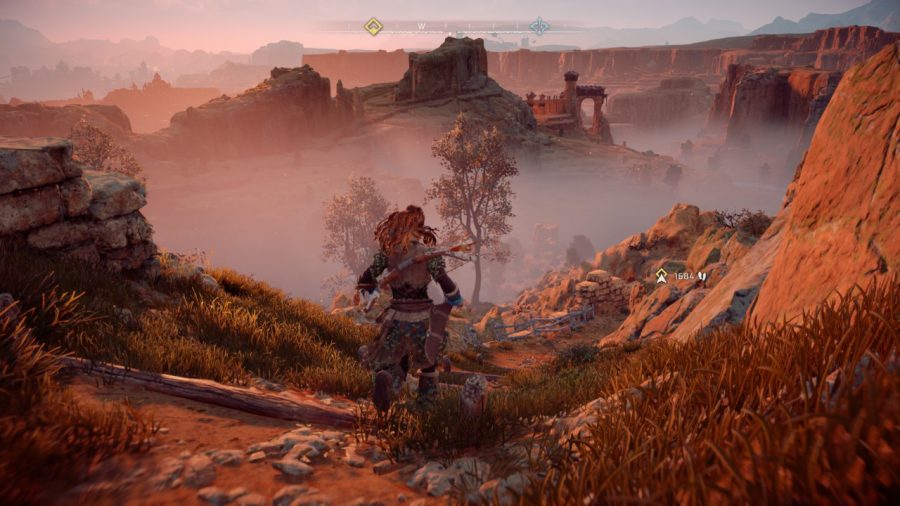 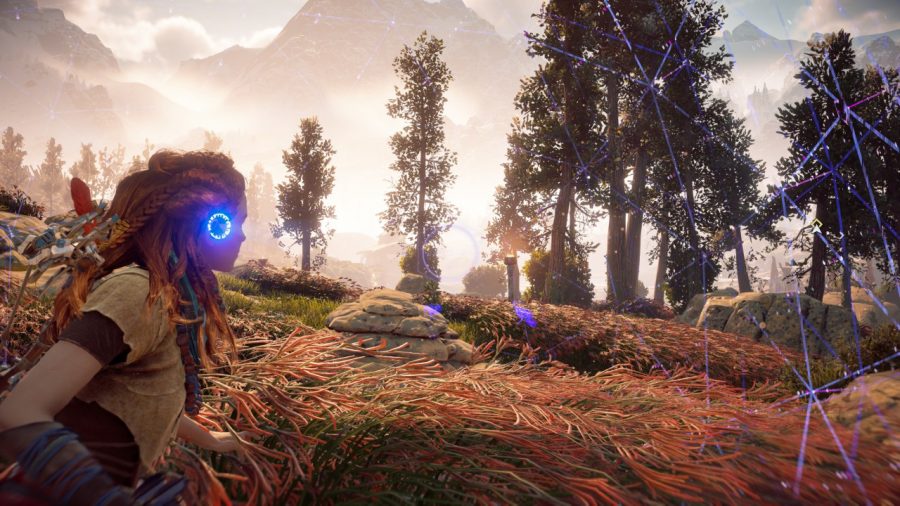 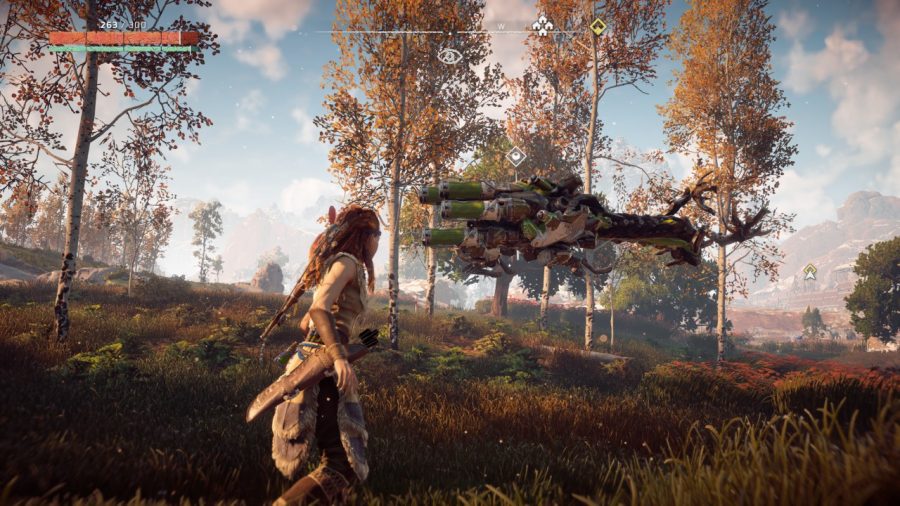 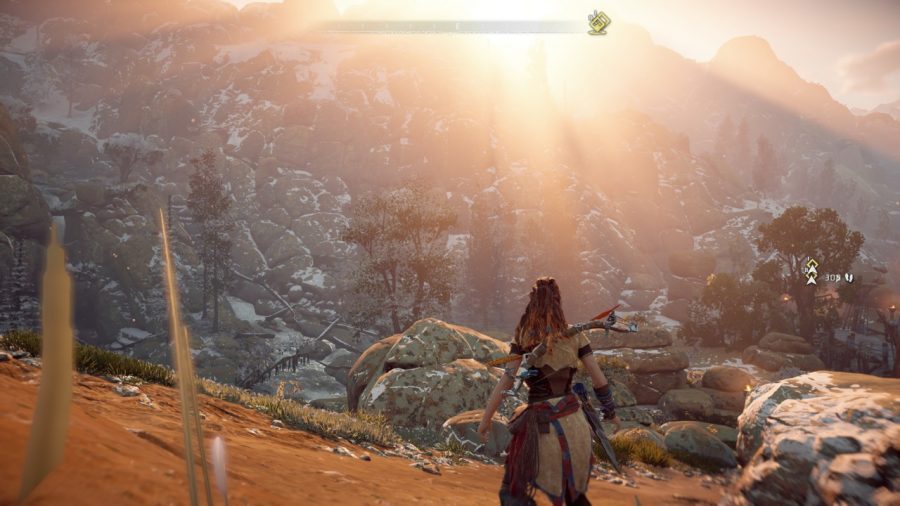 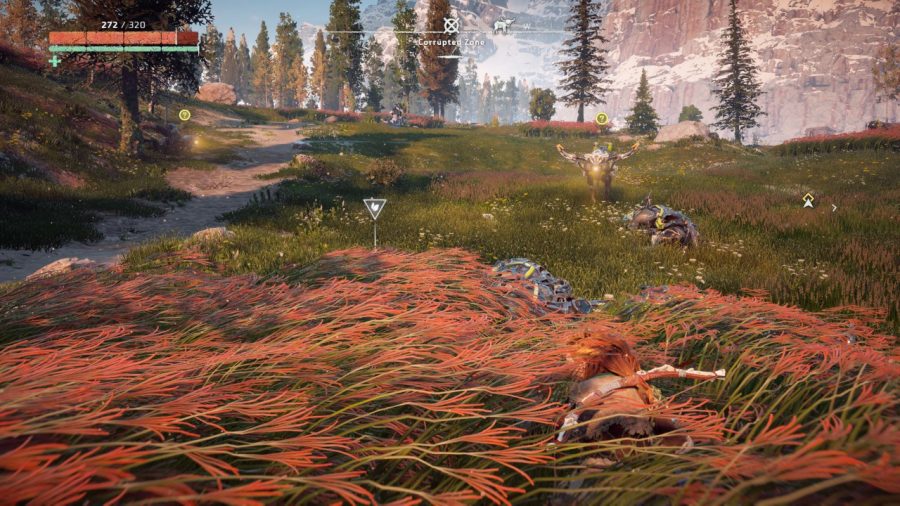 Horizon: Zero Dawn doesn’t reinvent the wheel. Either you’re already on the wagon, having hopped aboard from the moment I said “robot dinosaurs”, or you’re waving it off because the prospect of spending 30 to 50 hours on what is essentially busywork doesn’t appeal to you.

A very workmanlike open-world game. Great to look at, competent overall, and charming when it tries something new, but formulaic when it doesn’t - which is most of the time.