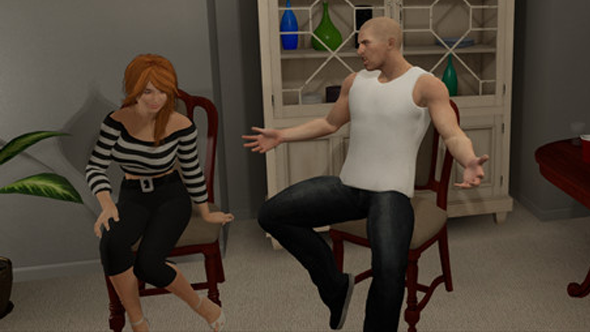 Valve have returned House Party to the Steam Store after removing it last week for its sexual content.

Previously, there was speculation that the game’s removal from Steam was due to scenes in which you blackmail women into sleeping with you. But developers Eek Games say that wasn’t the case, as all they had to do for House Party to return to Steam was turn on its censored mode by default. Valve didn’t have an issue with the nudity or the context of the sex scenes, only with the visual depiction of intercourse.

While we’re on the topic, have a look at the best sex games on PC.

Speaking to me by email, Eek Games’ Bobby Ricci confirmed that “[the removal] was just about the sexual acts depicted. I never thought it was about the game content. […] Valve does not have a reputation of censoring or banning a fictional story.”

Eek Games have always maintained House Party is a parody. Ricci adds to the defence that “some of the scenarios in House Party can’t hold a candle in terms of shock value to other games and their scenarios, and other forms of media that are freely available.”

Even with that said, it’s not clear what House Party is parodying, and even if there are scenes in other media that are stronger, that’s not really relevant. The game can only be judged on what it itself contains.

To put it into context, in House Party you could steal a woman’s phone and use the images on it to blackmail her to sleep with you (this scene has now been altered but you can find the original on YouTube); force a woman to “parade” around naked; and get a woman drunk so she’ll dance for you during which you can look up her skirt. 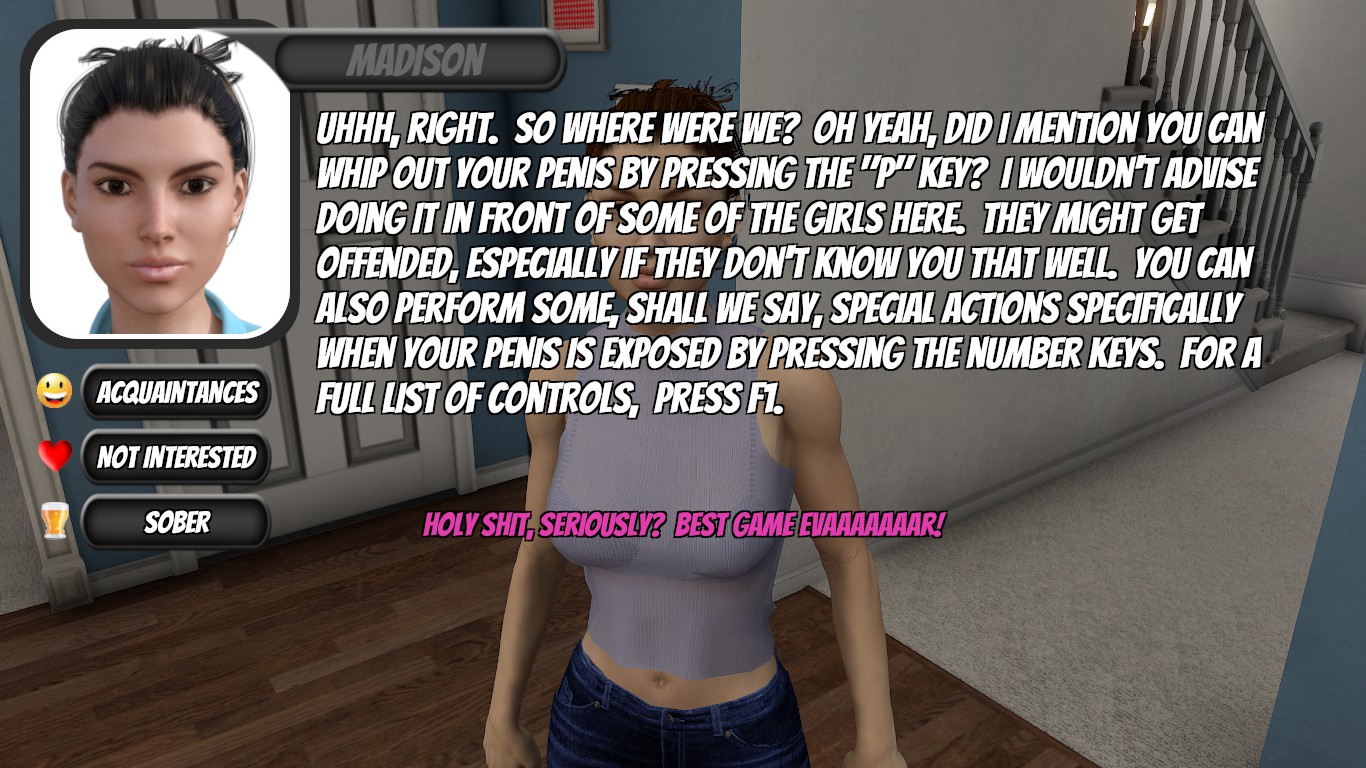 The developers defend themselves in a blog post, saying “House Party is also about choices. A lot of people are talking about what you *can* do in House Party, but they are not talking about the fact that you are given a choice every step of the way, or the consequences of those choices.”

Except, this line of reasoning begs a question: how many people are playing House Party by just walking around the house talking to people and not following any of the quests to conclusion?

Ricci told us the negative response to the game got out of hand, saying “it’s like that game of telephone where somebody sees a video and the story changes slightly from person to person and suddenly my game is the epitome of evil. The game, though shocking at times, is just meant to be absurd and humorous, and in no way shape or form would anybody mistake any of these scenarios as anything but fiction with the sole purpose to entertain.”

You can watch the videos of House Party uploaded to YouTube and make up your own mind on whether it’s harmless entertainment or deserves further scrutiny.

House Party was removed from Steam a week ago but it wasn’t initially clear why. Eek Games revealed in a blog post that Valve had reached out to them but hadn’t led with what needed to be changed to get the game reissued. On that post and across the Steam discussion boards, players said that they would lose faith in the developers if they bowed to “censorship.”

It turned out there was a simple fix Valve required for the game to be on sale. It wasn’t to cut anything from the game, but to activate the censored mode by default, and not have an option in the vanilla game to disable it. 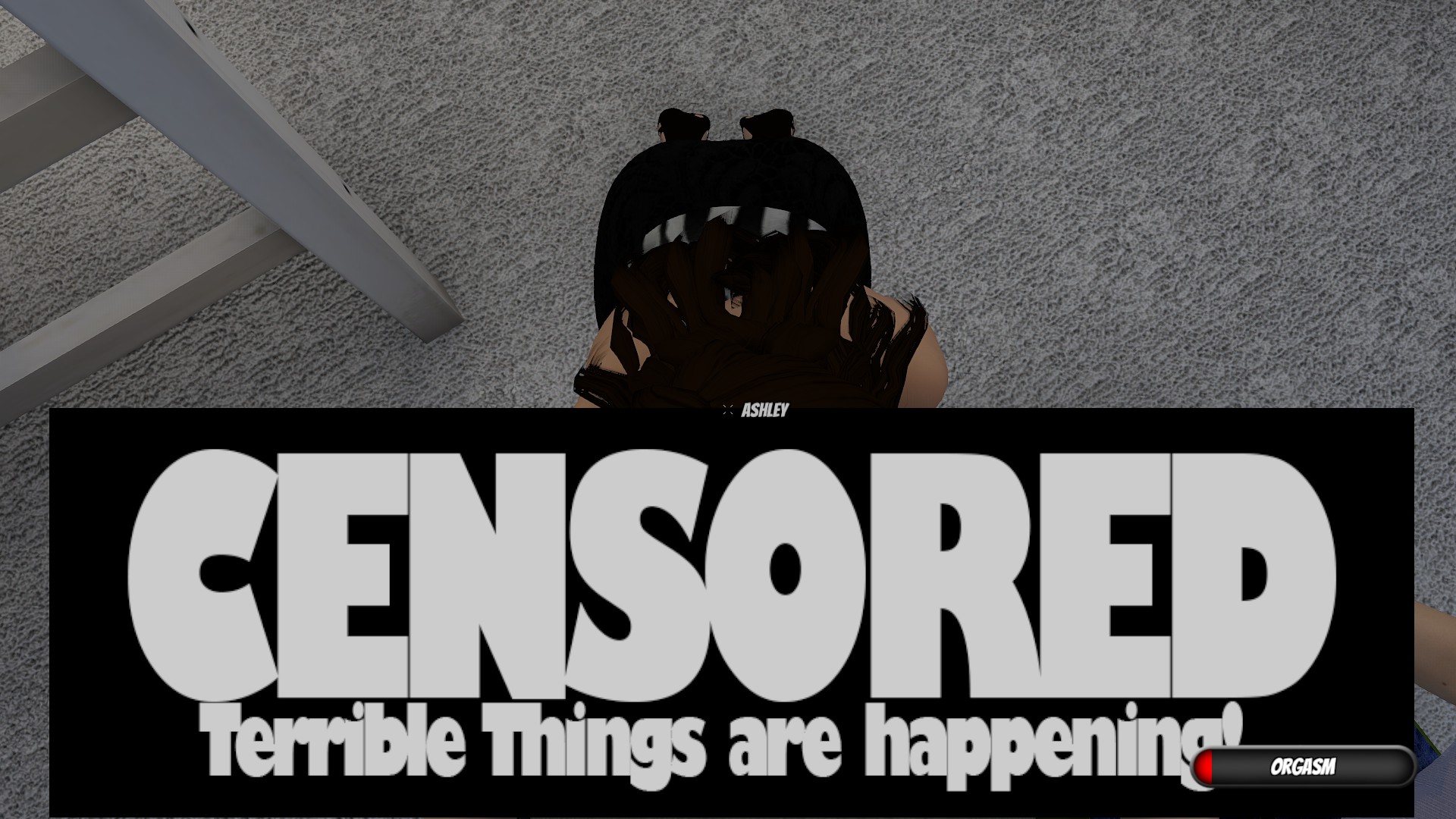 “It’s just a censor bar,” Ricci tells us. “The censor is actually an option in the settings normally. It was put in at the request of many [YouTubers] who wanted to play the game, but complained about the editing process afterwards, and suggested I add a built-in censor. I made the censor say ’CENSORED: Terrible things are happening!’ in a tongue-in-cheek way of pointing out the hypocrisy of sex and nudity being deemed ’terrible’ while gratuitous violence is just fine. The censor is now simply forced on during these brief scenes in the game regardless of the player’s setting.”

However, after the update that made this change to the Steam version of House Party, allowing the game back onto the store, the developer released a patch on their website that removes the censor bar – a workaround a lot of the adult games on Steam employ.

“Now, I know that there are many of you who take issue with the fact that you bought a non-censored game, and now aspects of the game are censored,” Eek Games say in a blog post. “There doesn’t seem to be any issue with providing an off-Steam patch to users to restore the game to its original form as many other games so overtly do, so we will be releasing a small and easy to install patch that you can apply to your game.”

Valve’s relationship with adult games has always been complicated but here their stance on what they allow onto the Steam store has been brought into sharper focus: the context of sex doesn’t matter, only the depiction of sex itself.