It’s the simple things that take you by surprise when playing Human: Fall Flat, like trying to push a button that’s ever-so-slightly too low down for doughy protagonist Bob to reach while standing. You can try running up and then slamming the ragdoll button in order to awkwardly shoot yourself at it. You can try brushing up against it and hoping your uncoordinated side-step finds the target. The correct solution of course is to crumple up on the floor and then blindly swat at the door release with one of your arms – crawling, spasming and fumbling are your keys to success.

With no plot to speak of, Human: Fall Flat relies entirely on the strength of its physics-based puzzling to keep the player invested. Reaching, grabbing, flopping, jumping, pulling, falling and pushing hold equal importance when it comes to conquering the deceptively simple obstacles of each level. It also means that the simplest challenges are often those that you’ll make the most mistakes on, like straightforward platforming sections that require the player to endlessly iterate and reiterate various jumping and grabbing techniques until – against all odds – they reach their goal.

Ordinarily, this level of difficulty surrounding such mundane tasks would be dull and frustrating, but Human: Fall Flat is careful not to overstep the floaty imprecision of its controls. Walking, running and jumping are easy enough, but the second any level of tactility is required the game quickly turns into an enjoyable farce where trying to press a switch takes on all the grace and elegance of two drunks playing patty cake together.

Gameplay generally takes one of two forms: platforming tasks where you have to exploit Bob’s limited skillset to essentially parkour yourself over each wondrously mundane barrier, and more standard puzzler segments filled with interactive objects. Both are compelling and need a surprising amount of spamming and, indeed, spasming in order to complete.

The lack of a guiding hand only adds to an already refreshingly open-ended experience. There’s joy in discovering you’re only one key push away from Bob going completely limp, his doughy body collapsing in on itself, and finding out you can still crawl around using his arms elicits sheer elation. Exploring each level unearths new ways of fumbling through a conundrum and it’s all too easy to find yourself distracted for a few minutes with a wholly self-made objective. 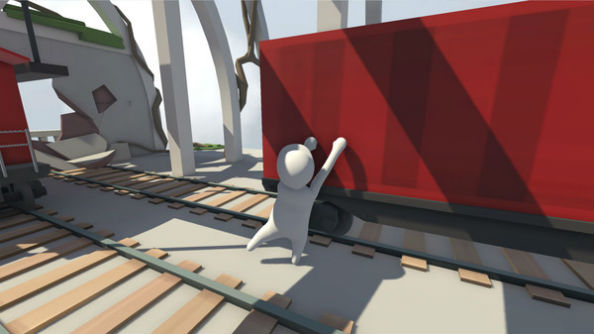 With his every step looking like an intoxicated stumble, his podgy texture and his lack of hand-eye coordination, protagonist Bob often resembles a toddler learning to walk for the first time. Which is fitting, because that’s how Human: Fall Flat plays. Navigating its dreamscapes is like learning an entirely different language of gaming, something that marries GTA’s videogame drunkenness with the ingenuity and precision of Portal’s puzzles. Walking up a staircase is a learning curve, but nowhere near as taxing as getting a crate over a microscopic gap. The incredibly gentle pacing also helps curb any frustration that might start creeping in: particularly Herculean feats don’t exist in Human: Fall Flat, and you’re never far away from some comic relief if you do get stuck.

There’s plenty of space to make your own fun as well. With most tools in each area having nothing to do with the puzzle, the game is practically begging for players to experiment and mess around to their heart’s content. I found myself constantly distracted by a series of overturned park benches, stopping to try and turn them over or reposition them for no other reason than, well, it felt right. There are dumpsters to dive in and push into the void, wooden planks to take with you as make-shift companions – the tactility of the controls lend the occasionally bland environments some semblance of life that would otherwise be absent. 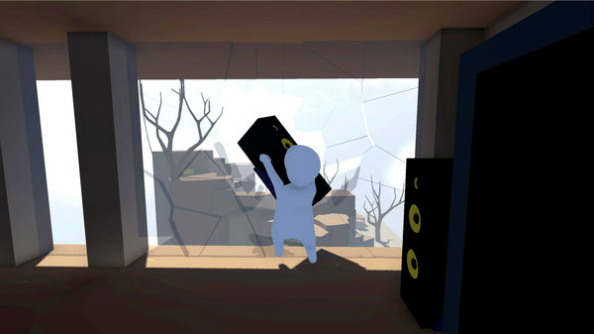 It helps that Human: Fall Flat also boasts quite a charming aesthetic. Each level is a surreal blend of architectures: medieval castles, industrial facilities, arid desert and landscape gardens all make an appearance, often directly alongside one another or spliced together. It’s a look that effectively conveys the game’s sparsely mentioned premise, that of Bob attempting to escape his dreamworlds where he’s always falling.

Human: Fall Flat’s charismatic brand of puzzle-platforming offers the player relentless fun rather than dimension-altering depth. Floundering through a level is never revelatory, but it doesn’t need to be when falling over or accidentally performing a certain infamous salute can result in an impromptu guffaw.

Human: Fall Flat releases on Steam today, click here to find out more about the game.