Humankind is a new strategy game that wants to take on Civilization as the next king of 4X games, but it differs from Firaxis’s heavyweight in a range of key areas, one of which is how you win a game. While there are still the Civilization-style pathways – focusing on science, or industry, generating money, the usual suspect of military conquest – Humankind differentiates how a game ends and how you win.

Depending what option you pick in the ‘Pace’ settings menu of game setup, there will be between two and seven different ways a game of Humankind can finish. Who wins that game will then depend on which civilisation has the highest fame score. As an example, one of the end conditions involves completing the entire tech tree; if you happen to be playing a scientific powerhouse and end up bringing the game to an end because you’ve researched all the techs, you may still end up losing because another civilisation has a higher fame score than you.

This differentiates Humankind from Civilization, in which a game doesn’t end until one player meets the specific conditions to win (unless you’re using the time limit ending), meaning that they win by definition.

You can earn fame in a number of different ways in Humankind, but it can be a bit much to wrap your head around to begin with, so we’ve put together a guide that breaks everything down, and what you need to know to make sure you come out on top.

Humankind tutorial – how to end The game

A game can end in one of seven different ways:

These different ending conditions are mixed across four different options in the settings menu. The default option enables all seven, while others may limit you to just two. Reaching the last turn and rendering the world ‘unfit for human life’ are present in all four options, so whatever setting you pick, either of these will always end the game.

So far we’ve noted that completing the technology tree seems to be the easiest and fastest way to end a game before the last turn timer runs out. Due to the scarce nature of strategic resources needed for nukes, and for launching missions to Mars, you’re more likely to finish off the tech tree before you manage anything else, although we imagine a dedicated player might be able to conquer the map quite quickly if they wanted to. 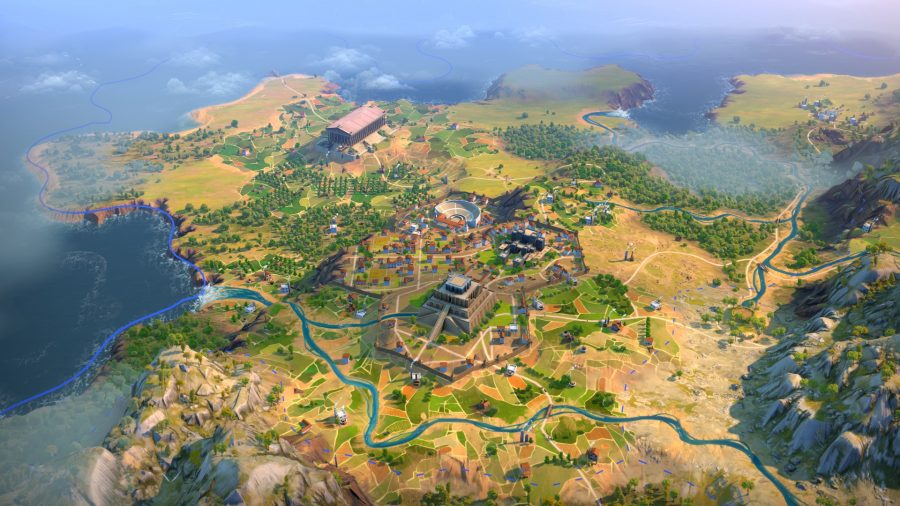 Humankind tutorial – how to earn fame

You can earn fame in a few different ways, but the two primary generators will be era stars and world deeds. World deeds are exclusive achievements for doing something in-game (see below), but era stars are what you’ll be working towards more consistently.

All era stars net you fame points, and you don’t have to advance to the next era straight away if you don’t want to – you can keep your civilisation held back in order to unlock more stars in that era if you wish.

After the Neolithic, each era’s stars are divided into seven sets of three – there is one set for each of the game’s seven affinities: Builder, Aesthete, Expansionist, Agrarian, Merchant, Scientist, and Militarist. Each star within a set also has its own objective, and anyone can achieve a star, even if it’s been achieved by one or more other civilisations already.

There are a number of ways to boost the amount of fame score you can earn. Each Humankind culture has its own cultural affinity to match one of the era star sets, and you’ll earn double fame from stars within that affinity. As an example, the Babylonians are a ‘scientist’ culture, and so will earn double the fame from scientist stars, which you get by researching technologies.

You can also gain extra fame by choosing not to pick a new culture when you advance to a new era, something the devs have called ‘transcendence’. Obviously, the drawback of this is that you don’t benefit from the bonuses of a new culture – you get no new emblematic units or districts, nor will you add new legacy traits to your civ.

However, if you choose to keep the same culture in a new era, you earn 10% more fame from fame rewards, and this effect is cumulative if you stick with this culture through successive future eras.

Other ways to earn fame

Other things that generate fame include: 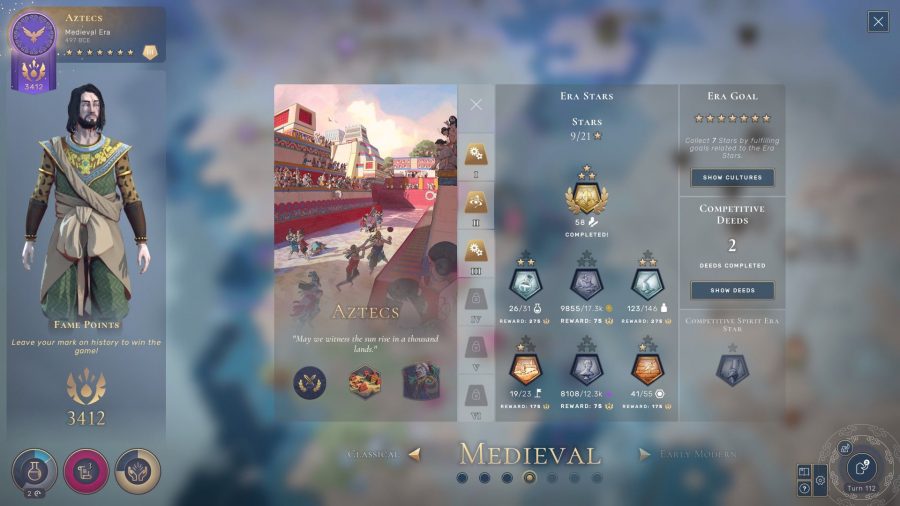 Each era has 21 era stars, divided into seven sets of three. You’re awarded these three stars at different levels of achievement within the relevant affinity – make a certain amount of money for one merchant star, make some more for your second, and more still for your third.

The numbers you need to reach to earn each star depend on factors such as the world size, game speed, and even what era you’re currently in. The basic condition never changes, it’s just the target gets larger over time and it’s not always a linear progression. You can view the formulas on Humankind’s official encyclopaedia.

In the meantime, here is a rough summary of the era star sets and what they relate to: 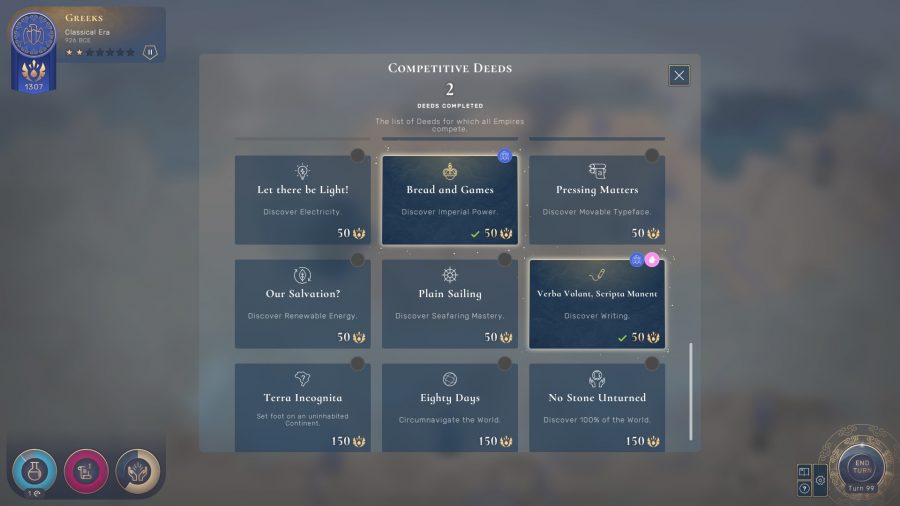 There are twenty world deeds in Humankind at the time of writing, each awarding between 50 and 150 fame points. Each world deed can only be completed once globally – when a civilisation achieves one, no one else can do so.

We hope this arms you with everything you’ll need to secure victory in Humankind. Want to make the game easier? Check out our difficulty settings guide to give yourself a better chance.