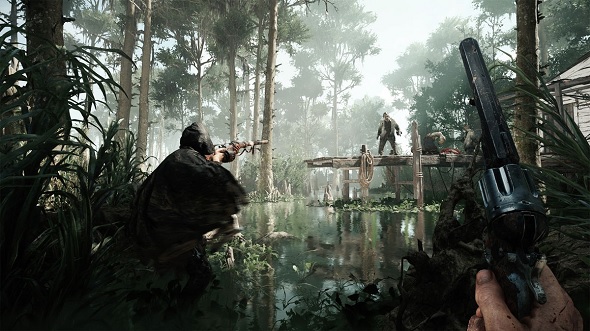 You should know Crytek as the creators of Crysis – the game that, for a long time, was used to test the graphical power of new PCs. Their next game is another first-person shooter but this time you’re hunting down terrying beasts and then avoiding other online players to make off with the rewards.

We have 250 Steam keys for the closed alpha of Hunt: Showdown up for grabs below. If you want one make sure you keep reading as you scroll on down.

Miss out on this giveaway? You can always check out our big list of the best free Steam games.

Hunt: Showdown is set among the savage swamps of Louisana where nightmarish monsters roam freely. You head on in there with a single teammate in an attempt to banish these horrid creatures from the world – and, in return, you will be paid handsomely and given the chance to upgrade your weapons.

But there’s a catch. Everytime you enter the swamps you do so alongside four other teams of two. Whenever a team manages to kill their monstrous target a bounty is placed on their heads for the other teams to earn by killing them. If they can make it off the map alive then they get to keep the increased rewards that come with the increased danger.

If you do die then your character and their gear will be lost forever. That sounds harsh but it is not quite as bad as it sounds. Hunt: Showdown uses a Bloodline mechanic, which means you get to keep all the experience of your bounty hunters after death, so you can pour it into making your next one stronger. Not all is lost.

Currently, Hunt: Showdown is in closed alpha on Steam and so is only available to those who have keys to get in… but we are giving you the chance to get in on it. All you need to do is grab one of the keys by completing one of the actions in the widget below (key redemption instructions are provided underneath the widget).

To redeem your key, just follow these simple steps:

If you need the game manual for Hunt: Showdown you can find it here. There is also a tutorial video that you can watch above.