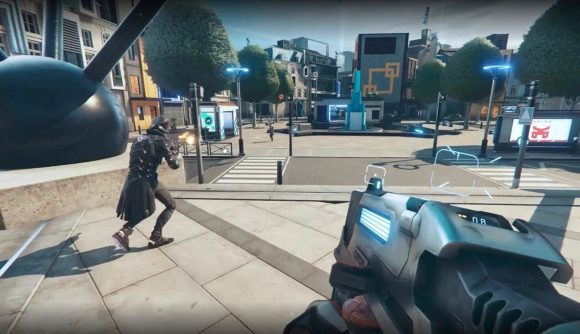 Ubisoft is about to reveal a new free-to-play battle royale game, if a new leak is to be believed. The game, which is named Hyper Scape, is a “AAA multiplayer fast-paced FPS … from Ubisoft Montreal”.

That’s according to Rod Breslau, a consultant in the esports industry. He’s tweeted details on the new game, citing unnamed sources. He says Ubisoft will begin to tease the game today, June 29, under the codename “Prisma Dimensions”. He goes on to say the game will go into “closed beta next week with open beta and full launch of the game on July 12”. Hyper Scape will also come to consoles with full cross-play, Breslau says, though he claims this won’t happen until “later this year”.

In a continuing thread of tweets, Breslau states the game has been “built with streamers in mind in a full partnership with Twitch with never [before] seen levels of integration from a big game”. He claims Twitch commenters will be able to “directly impact the game live” while watching.

Ubisoft Montreal, the purported developer of Hyper Scape, has most recently led development of Rainbow Six Siege and its spin-off Rainbow Six Quarantine.

If this leak turns out to be real, it will be Ubisoft’s first proper attempt at taking a piece of the battle royale pie following the huge success of Fortnite, PUBG, Apex Legends, and others in the genre. Until the reveal and launch of Hyper Scape, you can check out our current list of the best battle royale games or the best FPS games.