There’s already a game called Hypercharge: Unboxed available to buy on Steam. But if you ask its developer whether or not it’s worth playing, they won’t spin you a story. “The version that’s on Steam now is a boring cluster… mess,” Digital Cybercherries’ Joe Henson tells us. “There was no real idea with it, no real direction.”

In fact, Hypercharge’s next update won’t have a single line of code in common with its namesake. Over the past year, the team has rebuilt the enemies, maps, mechanics, UI, HUD, sound, and graphics of this toyland co-op defense shooter from scratch.

It’s not a completely unprecedented move – several months after Rust became an early access phenomenon, developer Facepunch decided its code base was unworkable and started again in a new engine. Nevertheless, it’s highly unusual, and indicative of the strange story behind Hypercharge’s development.

Essentially, Digital Cybercherries is a band that split up before it could put out its album. 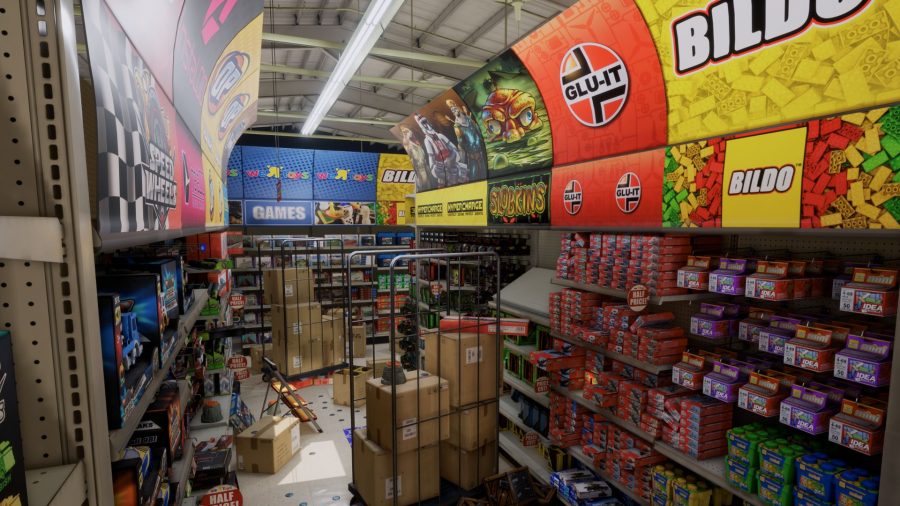 Those who remained – just four developers, with Henson working full-time as a painter-decorator – pulled together all the community feedback they could, and resolved to “plough it out in updates”.

When the developers aren’t having fun, that’s when you know it’s wrong

“The thing was, because so much had to be changed, we couldn’t drip feed it,” Henson says. “It would have caused more hassle, since people would have been playing a broken game. The whole core game mechanics have completely changed.”

Instead, the team has been building towards a relaunch – what they call Early Access 2.0.

“I personally thought, let’s grit our teeth, some of the fans probably won’t be that happy but we have to stick to our guns,” Henson says. “There’s actually a game now. Before, it was just barebones. It wasn’t fun. When the developers aren’t having fun, that’s when you know that something’s wrong.”

The new version of Hypercharge: Unboxed is a co-op defense shooter somewhat reminiscent of the sublime Orcs Must Die!. You and a team of friends must protect three hypercores, building turrets and traps to trip up a wave of enemies modelled after iconic toys of the ‘90s – the classic army men, and deadly “spinners” familiar to anyone who collected Beyblades. Batteries power your defenses, slotting into place in tactile, nostalgic fashion. On the basement map, plastic baddies swarm across the floor and along the high pipes that line the walls. “Anywhere you look, you can navigate the environment,” Henson says.

The game plays cleverly with its miniature setting – character customisation takes place on the shelf of a toy shop, and you see your avatar’s new plastic head plug into place as you pick the parts. “With the robot enemies, if you shoot off their heads they’ll still keep attacking,” Henson notes. “Even if you shoot off their torso, they’ll still run with their legs and start kicking.”

That visual comedy has been fairly simple to pull off from an animation perspective, but getting robotic gibbing to fire the same way across several players’ PCs is tough. “Making sure the networking is all synced, that’s the trickiest part,” Henson says. “Making sure other players see it happening at the same time if I punch a robot’s head off.”

Read more: Pull the best indie games on PC out of the box

The team has built on the networking foundation long-established in Unreal Engine 4. “It’s been absolutely amazing,” Henson says. “With the Blueprint system, we can just connect the dots easily. If there are any crashes we can figure it out with ease because of the report system. It’s like riding a bike.”

Any sense of ease has been welcome over a year and a half of rough development. It’s a relief, now, for the team to hear each other laughing and having fun with the game again.

“That tells you everything,” Henson says. “Before, we didn’t enjoy it. But now, as it’s pieced together, it all fits and we’re mega proud that we’ve achieved it with the time constraints and our own money. The people who stayed in the team, who made Early Access 2.0, we stuck together as a unit.”

In this sponsored series, we’re looking at how game developers are taking advantage of Unreal Engine 4 to create a new generation of PC games. With thanks to Epic Games and Digital Cybercherries.