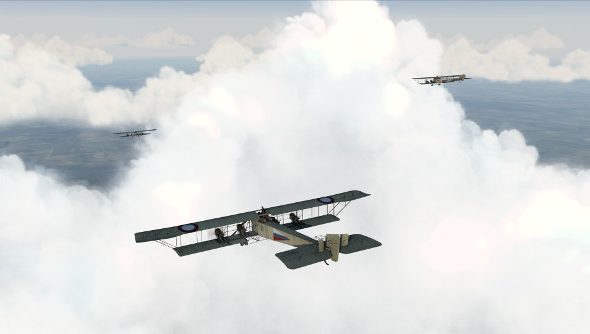 Flight sims aren’t what they used to be.

In the hobby’s infancy, flight sims were one of the major genres, and even legendary designers like Sid Meier worked on air combat games. Games like Jane’s Longbow and the mighty Flight Simulator series were mainstream hits.

The landscape has changed dramatically since those days, however, and the time when flight sim fans could look forward to a few major releases every year are long gone. The Falcon series, Jane’s, Red Baron, and most of the others have been permanently grounded.

Succeeding in flight sims today requires a new, more supple approach, according to 777 Studios’ producer Jason Williams. With a smaller market, but with potentially revolutionary technologies like Oculus Rift on the horizon, the name of the game is accessibility without compromise.

Flight sims aren’t what they used to be. They’ve changed with PC gaming. And now they’re both about to change again.

777 Studios made their name with Rise of Flight, one of the best World War 1 flight sims since Red Baron and Dawn Patrol. Now, they’re working with 1C on two new sims.

The big name is IL-2: Battle of Stalingrad, the follow-up to the classic IL-2: Sturmovik. The other game is called Ilya Muromets, after the first heavy bomber ever made, which was created and used extensively by Imperial Russia during the First World War.

While IL-2 is something of a departure for 777, Ilya Muromets is very much in their old Rise of Flight wheelhouse. The war it models, however, is a very different one. In addition to a bunch of rarely-modeled Russian aircraft and the eponymous Ilya Muromets bomber, Ilya Muromets takes place on a front without long trench lines. More importantly, the Muromets’ bombing capabilities actually give it an operational role that aircraft never achieved on the western front, where they were limited more to tactical raiding, air support, and recon.

But it’s not the game design and flight models that preoccupy Jason Williams and the 777 / 1C development teams. They know they can make a great flight sim together, and they’re working with a proven quantity in the Rise of Flight engine. No, the real challenge for this next generation of flight sims is to lower the barriers that chase people away from even giving the genre a chance.

That’s why they’re committing what some hardcore flight sim fans might consider sacrilege. They’re making sure their games are as good with a mouse and keyboard as they are with a flight stick.

“We felt that this was an investment for the future. Because a lot of other games have mouse control of airplanes now. As much as the hardocore folks like us don’t necessarily enjoy that, we know that there’s a market for it,” Williams said.

Williams is keenly aware of the popularity of games like War Thunder and World of Warplanes. War Thunder is of particular interest to him. He returned to it several times during our interview.

It’s not surprising: World of Warplanes is basically a pure arcade game, but War Thunder is recognizably a kind of flight sim. Williams referred to it as “more of an arcade game”, but it’s far closer to Rise of Flight than it is to World of Warplanes. Somehow, it manages to feel authentic and intuitive even when players are using a mouse.

“If you go fly an arcade style game, and they have mouse control, the performance envelope for each plane is essentially the same,” Williams said.

But flight sims like IL-2 and Ilya Muromets are all about the character and idiosyncrasies of different aircraft. You can’t tune the controls for a bunch of small performance variations on a single theme.

“Our planes all have unique characteristics thanks to the flight modeling, which is very advanced. So you’ll need to watch out for those characteristics, even if you’re playing with a mouse. 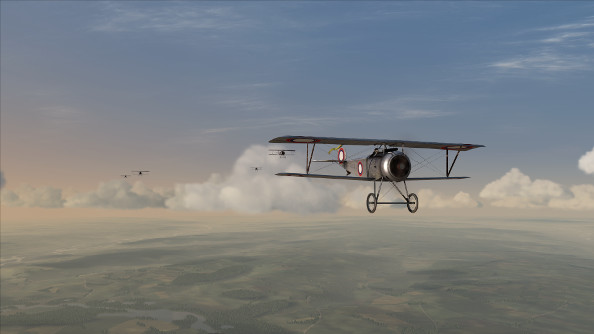 “We want to be the first to give potential customers the opportunity to fly a hardcore sim with the same physics, the same ballistics, the same flight envelope, the same everything that you would get with a joystick,” Williams continued. “And then, if you fly multiplayer and you encounter somebody that has a stick, you can at least be a competitive player. We’re not trying to simplify our gameplay, we’re just trying to give another control option.”

It might be a bitter pill to swallow for purists, but it’s a reality to which 1C and 777 are adopting. The success of War Thunder and Warplanes is far too great to ignore, and most PC gamers don’t own flight sticks anymore.

That’s probably the biggest difference between the market of today and and the market that gave us what Williams calls the Golden Age of Flight Sims: the 1990s, and early 20002s. Not only did most PC gamers already own a joystick, but they were used to stretching their hardware (and their budget) to play the latest and greatest.

“There’s probably no sim that offered a state of the art — for its day — high fidelity flight sim experience that did not have trouble reaching 60 FPS.” Williams said. “One of the genres that would push your PC and want you to buy a PC the next year were flight sims.”

But that’s not really the PC gaming market anymore. It’s become much more accessible overall, and encompasses people running a broader range of hardware. Where sims used to be able to boast about how they would bring your PC to its knees, and sim pilots would deal with jerky framerates in exchange for beautiful ground textures and better models, people want smooth performance without needing to upgrade. That’s caused 777 to become a slow — perhaps frustratingly slow — adopter of modern graphics standards. 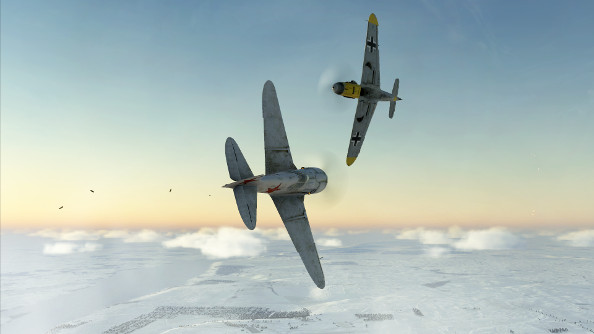 “People criticize us because we have not adopted DX11. We never fiddled with DX10. We stuck to DX9,” Williams admitted. “We could amp up the eye candy even further if we really wanted to. …But we can’t do that without negatively impacting the gamers’ experience. We don’t want to make it so that only people with a 3k dollar computer can play our game.”

Williams seems to be ruling out the kind of graphical scaling performance that a lot of other developers employ to support new hardware while remaining accessible. On the other hand, as Williams is at pains to remind people that flight sim development is not really comparable to mainstream games.

“You have all these awesome engines that you can purchase or get your hands on to make an awesome shooter, and those engines typically have a lot of middleware that you can utilize to solve some of your computing issues,” he pointed out. “Like the physics, or the graphics. There’s third party help to get you from conception to a finished product.

“Every single flight sim that’s ever been made has essentially been made with a custom game engine. And the engine has to do the graphics, the physics, the ballistics, the damage model, everything. And it usually has to do it on a very large scale. Like we have in Stalingrad: 48,000 square miles. Or in Rise of Flight, we model the Western Front from Switzerland all the way up to Belgium.”

This is not to say that Williams and his colleagues are trying to hide from the future. Rather, they’re trying to figure out where they fit in the future PC gaming landscape.

The wild card in the deck, of course, is Oculus. Williams is predisposed to favor something like the Oculus. Before joining 777 he worked at NaturalPoint, the manufacturers of the brilliant (and woefully underrated) TrackIR.

“Head-tracking, if it didn’t save flight sims, changed the way they were played,” he explained. “Prior to TrackIR you’d have to use your mouse to look around in the cockpit, or use a padlock view [where your vision locks onto a target]. But TrackIR made the experience so much more intuitive and immersive that it just got so much easier to fly.” 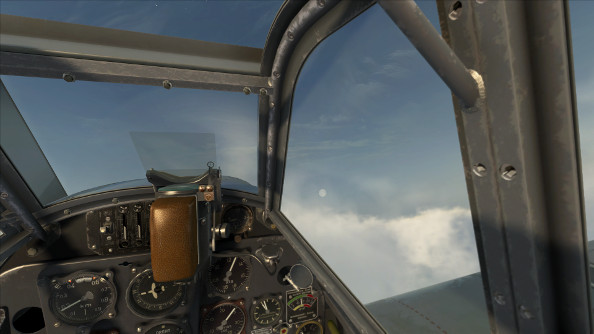 He admits, however, that the Oculus Rift is a qualitatively different experience. “There’s something about putting that goggle on your face, with the screens on your eyeballs, that somehow puts you in the seat that you can’t get any other way,” he said.

IL-2: Battle of Stalingrad will support TrackIR, and there’s already a build of the game that uses it. The team decided to keep it out of the ongoing IL-2 beta, though. A beta version of Oculus support, for in-progress hardware, inside a beta flight sim was just a little too much “beta” for them to be comfortable with.

“We had Oculus working internally, we did tests with it, we built support for it. But now that the Dev Kit 2s are shipping and the retail device is not too far away, then we can really sit down and make sure we implement it properly and give our users a really great experience with Oculus,” Williams said.

On the other hand, some of 777’s moves into the future have been less well-received. Rise of Flight, as well as IL-2 and Ilya Muromets when they come out, requires an online connection to play the single-player campaign.

“Piracy was rampant in the first half of the last decade and even later on, when more DRM systems were put in. Shooters and strategy games tried to find way to better fend off piracy, and we were the first real flight sim company to say, ‘We better do something here, because if we’re going to spend 3 or 4 million dollars developing a flight sim, we need to make sure that we can protect it,’” Williams said.

It’s easy to scoff at this justification, and you’ll find no shortage of developers who have take a stand against DRM and accepted piracy as a necessary cost of doing business. But the margins are a little tighter for a small-market studio like 777, and there’s something else to consider: the flight sim community may be uniquely comfortable with piracy. 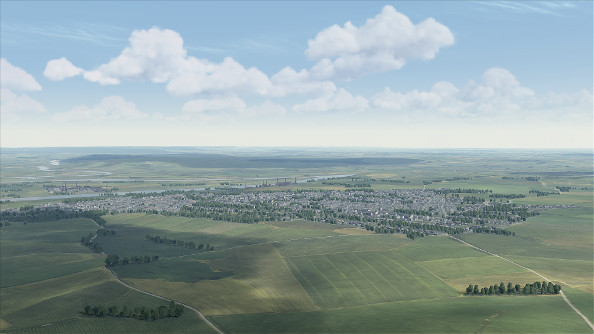 That’s not a value judgment. As a friend explained to me regarding the civil aviation sim market, it survived and thrived for years thanks to torrents. Long after games like Flight Simulator vanished from store shelves, there was a huge market in premium mods and fan updates for these older games. For devoted sim pilots, torrents often became the most convenient and reliable way to preserve their genre.

So 777 made their games dependent on a server connection, although Williams hopes they’ve also given some value back for that. In addition to randomly generated missions for every player, it’s also made it relatively easy to keep Rise of Flight up to date. He also concedes they’ve slowly stepped back from their original always-online model. Now, only the campaign really depends on the server connection. Most other game modes can happen without talking to the servers.

The ultimate proof of success for 777 and 1C, of course, will be how audiences receive IL-2 and Ilya Muromets. While they will likely find a home among serious combat flight sim fans (many of whom will show up to just about anything with the IL-2 name), the Williams and his colleagues have set themselves a much more ambitious task.

With a focus on easier hardware requirements, and making their next generation of games mouse-and-keyboard friendly, they are trying to return flight sims to a day when they were not just for a sim audience, but for a PC gaming audience.

It’s an interesting experiment. The people who showed up in droves to Red Baron and the Jane’s games are still out there. Now, Williams and his colleagues are about to find out if they’re ready to come back home to the cockpit.