It was only a matter of time before someone took Dark Souls and gave it a gun. Apart from Bloodborne, of course. Immortal: Unchained is a hardcore action-RPG with similar mechanics to the Soulsborne games; you save progress and top up healing items at checkpoints – where you also level up by spending ‘bits’, a currency dropped by enemies. If you die, you drop your bits at the equivalent of a Dark Souls bloodstain, where you can recover them unless you die again first.

The key difference is that it’s set in what we presume is the very, very far future, where an apocalypse looms in the form of a mysterious army of green-glowing, gun-toting undead. There’s a bit of Alien in Immortal’s grimdark sci-fi aesthetic, and more than a bit of Warhammer: 40,000 (albeit a very specific bit: the early stages’ slick, luminous technology recalls a Necron tomb-world far more than the industrial sprawl of the Imperium).

The character creator is another showcase for Immortal Unchained‘s unique look: we made an overly-muscled dude with a two-tone Mohawk, an elaborate insectoid facial implant, and grey skin covered in red tattoos. Quite the look, we think you’ll agree.

Now resembling a cybernetic Drax the Destroyer – except not bald – we pick a class, and it’s here that the most obvious differences from Dark Souls stand out. Specifically, most classes have guns: carbines, shotguns, and SMGs to name but a few. But wishing to have the most gun possible, and because sniping is cool, we roll a Marksman. 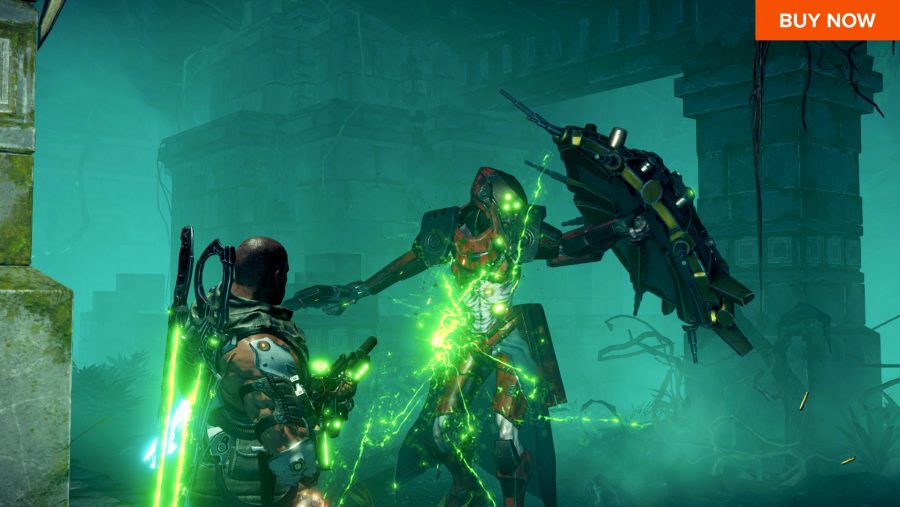 We – and potentially you, if you choose to part with $49.99 (discounted by 10% for another few days) – step into the boots of a living weapon so terrifying that we’ve been consigned to an eternity in space-prison by the wimps who fear our power. Much like Batman, we are not the hero the “nine planets” deserve, but the one they need right now – we are “black of heart,” yet are one of the only people capable of putting the undead down for good and averting the apocalypse. Thus, we are released, or rather unchained, with only a creepy dude in a hood for company.

Proof of concept that a Souls-like can work with guns

It’s all very intriguing, and poking around the first area to discover a shower of armoured corpses executed in the most brutal ways only raises more questions. We soon scavenge a burst-fire pistol and that all-important sniper rifle, and start plugging away at the bizarre breed of undead that haunt these eerie corridors.

The best word for them would probably be zombies, and indeed there’s a fair bit of shambling going on with the early, weaker varieties. But it’s not long before you encounter enemies with the intelligence to wield rifles, which even the sprinty ‘infected’ in 28 Days Later couldn’t manage. Moreover, they’re covered in armour and glowing green implants, reminding us greatly of a Mass Effect husk. 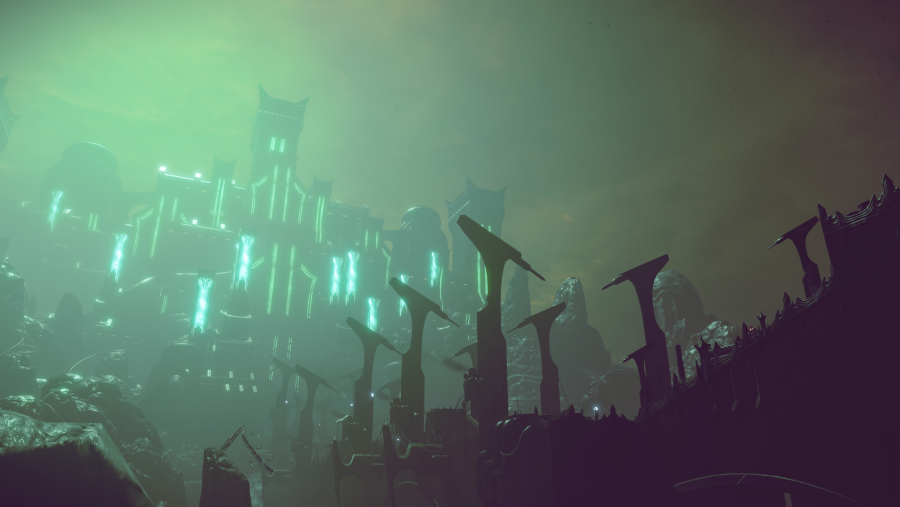 The first boss, Housecarl Invader, awaits us after a sprint over a series of laser traps that fire in waves – an early indicator that the developer has ideas to do things with the setting that perhaps weren’t possible in Dark Souls. For all that Sen’s Fortress was full of devilish traps, a laser grid would’ve been a tough sell, thematically.

The hulking undead humanoid is thickly armoured, but for a glowing weak spot on its back. The fight plays out as a tense duel of dodging gunfire while waiting for the creature to attempt a charge attack. This is devastating if it connects, but dodged successfully, yields a second’s window in which we can target its crit spot.

It’s simple stuff, but effective, and a decent proof of concept that a Souls-like really can work with guns. We need to play a little more to form a fuller picture, but at this early stage it’s fair to say that Immortal Unchained certainly has an intriguing premise and a slick, distinctive aesthetic going for it.

Immortal: Unchained is out now if you fancy delving deeper into its dark, bullet-ridden universe.