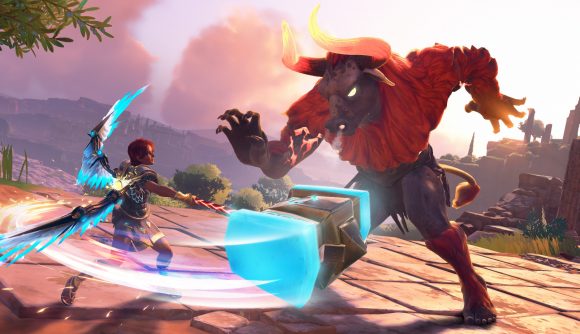 If you’ve been out of the loop, Immortals Fenyx Rising is an open-world adventure game inspired by the Classical-era of history. It may not surprise you to learn that Ubisoft Quebec is creating it – the studio that put Assassin’s Creed: Odyssey together. While the Assassin’s Creed is a bit more historically-based, Immortals looks like it takes its cues from Homeric poems and stories.

Today’s showcase offered a more substantial look at the game, including its cartoony combat and open-ended adventure. The reveal trailer shows off a big variety of aesthetics, from the green fields we’ve been seeing from the start, to darker locales populated by more intimidating monsters.

An early Microsoft Store listing revealed the December 3 date ahead of today’s Ubisoft Forward showcase. The store listing has now been taken down, but Wario64 was on hand to get a few screenshots alongside some pictures of the game.