Imperator: Rome is marching steadily towards its big overhaul patch, and it was announced today that another content pack expansion will release at the same time. Apparently, it’s set to be every bit as grand as the grand strategy game’s free overhaul is going to be.

“As befits our 2.0 statement,” developers Paradox Development Studios says, “the Heirs of Alexander content pack will be the largest yet; encompassing mission trees and flavour events for all the Diadochi nations, as well as the ability to customise and build a large variety of great wonders.”

The announcement was made during this week’s dev diary – no press release or fanfare this time around – which also goes into further details as to what else is coming in the 2.0 patch. One of the other changes that’s coming is to do with the ‘Legacy of Alexander’ war goal. Currently, this is a special type of war for the successor kingdoms that exist at the start of the game (known as the Diadochi) that allow them to fight each other to try and become the true heir of Alexander the Great’s empire.

This special war type is being reworked so that it functions in practice a lot like how Civil Wars currently progress, where control over a territory is flipped instantly when taken over (instead of having to wait for a peace treaty). The team are thinking of applying this principle to other unique scenarios as well where it would make sense from an historical perspective. 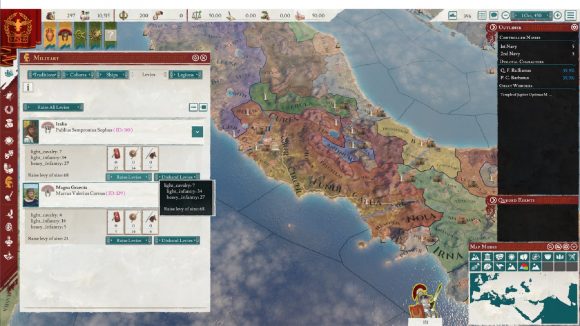 The devs have also shared some images regarding how the new distinction between ‘levy’ and ‘legion’ is going to be represented on the map. To re-cap, standing armies are no longer going to be present in the game. Instead, a player must raise an army from their population (known as a levy), which will then be used to fight. If the levies are raised for too long, war exhaustion starts ticking up faster than it normally would have. This is detailed in full as part of another recent dev diary.

A third diary goes into detail on the other half of the military system, that of the ‘legions’. Republics and monarchies will be able to regain the ability to raise permanent, standing armies. The term ‘legion’ is culture-specific, but we’re told the Greek culture polities at least will have their own unique name for them. Legions are permanent objects in that they can’t be destroyed unless forcibly disbanded by the player, or if the legion’s controlling government ceases to exist. 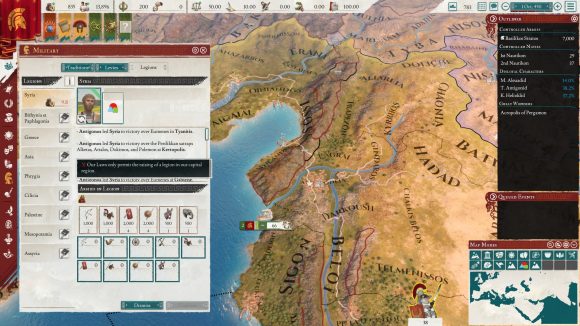 A premium feature coming as part of the Heirs of Alexander pack is that there will be a record of every legion’s achievements, known as the Legion Honours. It is believed that historically individual Roman legions kept extensive records of their unit’s battle awards, and battle honours, and this is being replicated here.

More like this: Check out the best Imperator: Rome mods

There is still no word on when the 2.0 update and the Heirs of Alexander patch is going to be released, but we’ll let you know as soon as there is.