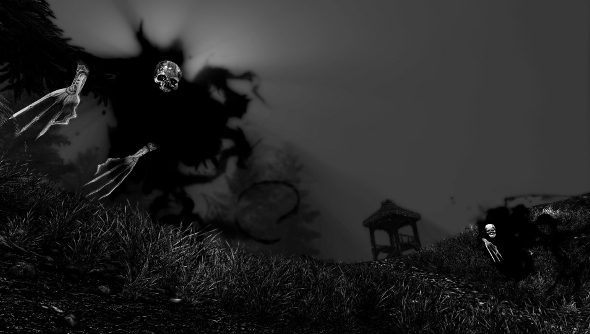 With the gently lapping waves washing over my feet, I watch as a ship slowly drifts off into the distance, past my own sinking vessel. I’m alone and I don’t know who I am. Lost in a vast monochromatic wilderness with only the breeze rushing through the trees and the chirping of birds and crickets accompanying me.

My solitude doesn’t last forever, though. I meet other lost souls, both literally and figuratively. Betrayer’s slice of the 17th Century New World is filled with the damned, the amnesia-ridden and the dead. And I’m just here to wander. To explore. To listen. And, more often than I like, to shoot.

A short coastal walk: my first experience of Betrayer. I wander among the trees, marvelling at the beauty of the way they arch and bend with the gusts of wind, and below them, the grass waves me towards my destination. The monochromatic filter is unsettling – hinting that something is not quite right – but in this idyllic path away from the ocean, I feel at peace.

The peace is rudely interrupted by a flash of red and arrows thudding into a statue. The colour becomes a beacon: it’s the dress of my only living companion; the colour of chests, filled with money I’ll need to spend to survive; and the colour of the liveries and burning, hungry eyes of my relentless foes.

I look back at that short walk, before I saw red, and I miss it a little bit. 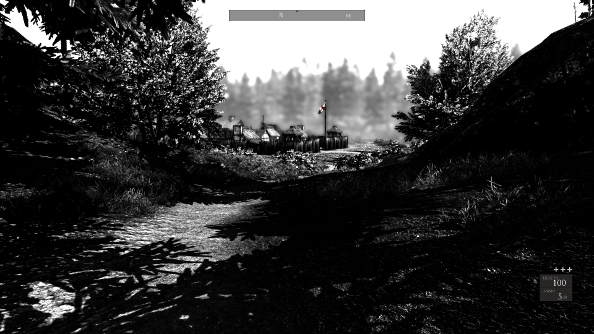 Betrayer is a product of great ambition. A game where the occasional flash of colour and bursts of audio are the only guides; where a terrible mystery is waiting to be unravelled and absolutely nobody else is going to help.

The land is cursed. Almost everyone – settlers, frontiersmen, natives – is dead, and it’s up to the sole survivor of a shipwreck to figure out why. And that is far, far easier said than done. Between the survivor and answers is a horde of demonic Spanish soldiers and deadly skeletons. The supernatural bleeds all over Betrayer.

It’s tantalising. The gorgeous world is ripe for exploration, the mystery demands answers and the enemies are initially horrifying. But rather quickly, it all starts to fall apart. The itch at the back of my mind that made me start to think that all was not well with Betrayer flared up mid-battle. So many of the game’s problems are revealed when fighting is involved.

Ostensibly, combat in Betrayer is all about stealth. Enemies on the normal difficulty – though there are now more difficulty tiers and it’s been made a bit easier thanks to a recent patch – do as much damage as the player. And at first, that’s fine. It’s rare to deal with more than a couple of them. 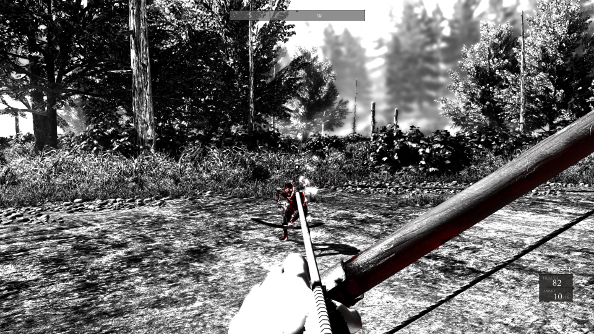 I’m always alert. Scanning the horizon, crouching in the long grass, waiting for the wind to pick up so I can move forward silently. When I see a Spaniard, I let loose an arrow. He goes down. His companion hasn’t noticed. Now he’s down too. It’s exhilarating. The noises that erupt when enemies are near are starkly juxtaposed to the pastoral sounds of insects and birds. They are guttural and monstrous, accompanied by sharp sound cues of horns and bells.

But they start to appear everywhere, and when one is alerted to a threat, they all are. The audio cues stop helping, as well. More often than not, I become aware of enemies when they appear in front of me or start to attack, giving me no time to crouch and employ stealth. And there are so many of them: veritable armies of ghouls and demons. The tension transforms into frustration. Beyond the uneven stealth, there is no nuance to the combat. Enemy AI is as basic as it can be, and the only tactic left available when they charge is to walk backwards and keep shooting the period appropriate weapons like bows and muskets.

Death comes often, and with it, the loss of gold. It’s a punishing system with similarities to Dark Souls, but without the interesting, tactical counters that happen beforehand. The death penalties can – thanks to a recent update – be switched off. This is a double-edged sword, reducing frustration slightly but also removing any real threat from the foes. They just become a nuisance. 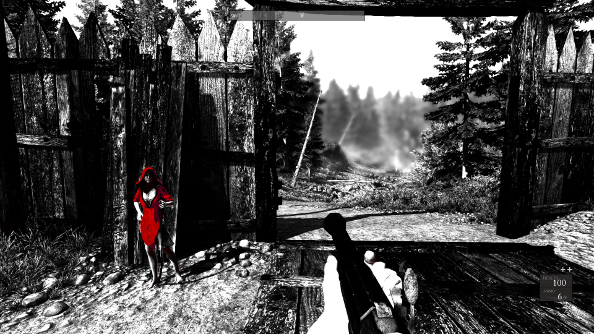 The mystery at the heart of Betrayer, the question of what happened to these scattered colonies and where these demons come from, is full of promise. Investigation is required, by chatting to lost and damned souls and uncovering objects that hint at life before the catastrophe. Beside the inventory are extra tabs with notes and the fruits of the investigation, but this isn’t really a detective story. It’s a long series of fetch quests, bloated with backtracking and little meaningful activity.

To talk to the spirits, a bell is rung. The peeling of the instrument transforms the environment into the lands of the dead, shrouded in mist and darkness, patrolled by skeletons. It’s a dramatic shift, making the already ominous landscape even more wrong. It also makes exploration through countless identical forests and woodland paths even more tiresome. The spirits have parts of their memories missing, and the only way to complete individual investigations is to find clues – usually just a bunch of objects – and show them to the spirits.

Slowly this builds a picture of the region, one filled with cruel, petty, jealous people. The intricate, slowly unfolding story of Betrayer is a compelling one, but putting it together is a terrible chore. From ghost to clue, to another ghost to another clue, and then back to the original ghost – it amounts to just wandering around an increasingly repetitive environment for hours on end. 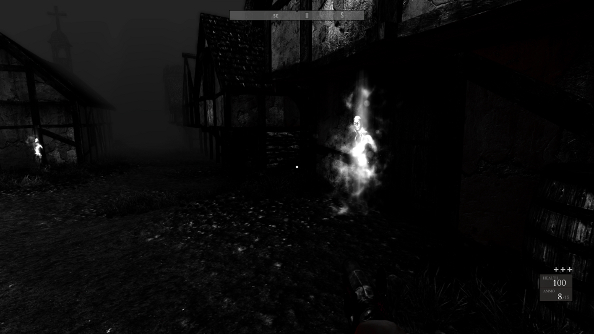 And with little guidance and a map with no waypoints, there’s only one way to actually reach objectives: through sound. A magical severed ear is the only guide. Pressing “x” unleashes howls and cries, which must be followed. It’s imprecise and barely works at all without headphones. To make it even more tricky, the listen ability has an invisible, albeit short, cooldown. There is now a visual cue, two little lights on the compass, that makes things a tad clearer at least – the result of the aforementioned update.

But so much of the game continues to involve wandering around aimlessly, admiring the untamed wilderness, but mainly running away from enemies that never rest. It becomes endlessly boring, not helped by a protagonist with no clear motivations; a hero without a context. And when the end finally comes, it’s half-hearted, with a drawn out buildup and then a bizarrely rushed crescendo.

Betrayer is an FPS where the shooting is lackluster and the enemies annoying. An adventure game where investigations are restricted to looking for objects on the ground. It is carried by artistic flair and – when it works – impressive audio design. As the violent encounters started to drain me of my energy and the plodding search for clues started to drain me of my sanity, I weathered it all because of my burning need to finish the story and my mission. I needed to put these souls to rest. But mostly I just wanted it to be over.