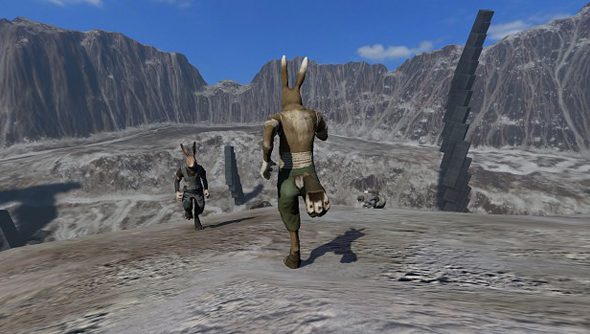 Our Steve said last week that he reckons Overgrowth has been in development for as long as he’s been writing about games – and in those days fledgling games journalists were sent into expos at 14 to pick USB sticks from the pockets of John Carmack. It’s certainly true that Overgrowth’s predecessor Lugaru featured in the inaugural Humble Bundle, set up by lead developer Jeff Rosen, and the series has rarely felt like Wolfire’s first priority since. Its name has begun to sound aspirational.

Overgrowth is still bare-bones, it’s true. But the cottontail-fu mechanics at its core are in a solid enough state that it’s now suitable for Steam Early Access.

“Dogs tend to wear heavy armour,” states Rosen in an alpha update. “And rats tend to use bits of the environment as camouflage.”

Overgrowth is not the Watership Down-style woodland survival sim Shelter was, then, but the game every teen wished existed after the release of The Matrix Reloaded. Animals stand on their high legs, run at each other at alarming speeds, and punch each other long distances. They block and parry and unleash flurries of fists via a mouse-driven contextual combat system that’s genuinely unlike anything else in gaming:

The alpha incorporates a player-vs-AI arena mode, a selection of challenge levels, and a level editor. It’s subject to all of the bugginess and performance problems of a game in active development.

“In its current state, it is more like a sandbox of technology and martial arts, and less like a story-driven action-adventure,” write Wolfire. “If you want to play through a polished campaign, you may want to wait until the game is fully completed!

“If you would like to have fun experimenting with our technology and mechanics as they evolve, and support us as we complete the game, then now is a great time to join our community.”

Existing preorderers can redeem a Steam key via the new button on their Overgrowth Humble Store page. Buy your Steam key direct from Wolfire’s site and you’ll also get a copy of procedural FPS Receiver and the developers’ Mojam game, Low Light Combat, in for the same $30 price. Given that Rosen’s greatest successes remain the strange array of shooters he’s made for timed competitions, I’d wager that’s the best way to go.

The price is steep, though, and the alpha’s arena can’t disguise the fact there’s nothing waiting beyond its stands. Is there enough here to sell rabbit-on-rabbit pugilism?