Civilization IV made designer Soren Johnson one of PC strategy gaming’s brightest stars. The 2005 sequel marked the series’ pinnacle to date, but following its release, Johnson departed Firaxis and made his way to EA, where he worked on the overhyped Spore before moving into social games at EA2D. That, in turn, set up a move to Zynga to join up with Johnson’s old Firaxis colleague, Brian Reynolds. They were poised to make the next generation of Facebook games.

But Zynga never delivered on any of the promise of its marquee names, and Johnson himself seemed to all but vanish inside the social gaming giant. He parted ways with Zynga earlier this year, and is now going his own way with his own studio, Mohawk Games. He’s joined by his partner and Civ V art director, Dorian Newcomb, and started the studio with backing and oversight from strategy publisher Stardock (Sins of a Solar Empire, Fallen Enchantress) and its CEO, Brad Wardell.

Johnson made his name by creating a brilliant sequel to strategy’s most iconic franchise, but with Mohawk he’s moving in a starkly different direction. He’s trying to reinvent the RTS with a project they have codenamed Mars, a competitive tycoon-style game set against a sci-fi land rush on Mars.

Mohawk’s inaugural game takes its inspiration from Johnson’s off-hours gaming at Firaxis, when he and his fellow developers would fire up games of Age of Empires II the moment they had any downtime.

“We loved that game, played it every day. It was a touchstone,” Johnson said. “If you’re a game designer, and you get really into a game like that, you want to make something like that. But ultimately I don’t have a lot of interest in making a classic combat focused RTS because there are so many of them.”

While Johnson loved Age of Kings, it was the format that appealed to him as much as the game. As a strategy designer and board game fan, RTS games seemed like an ideal way to return strategy games to their native environment: play with other people.

“I really believe that RTS games should be an incredibly varied genre. There should be so many ways to make a strategic game that’s not too long, that you can play with a decent group of people. There should be so many cool games like that. That’s just straight-up a great format. Similar to how board games are a good format. Games you can play in an hour with four friends around the table. There is such a variety of board games that way eclipses the variety of RTS games that are out there. I think that’s a real shame.”

It’s also an opportunity for Johnson and Mohawk. “This goes into something that’s very important for independent studios to do,” Johnson said. “We’re not going to be able to take on StarCraft. It would be foolish to try. Our competitive advantage is that we can explore game design ideas that would be far too risky for a much larger strategy developer to consider.” 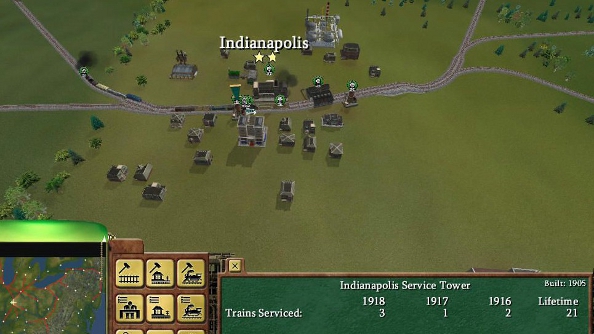 The game Johnson sketches out is, by design, reminiscent of games like Railroad Tycoon, the classic rail-building strategy series where players developed the American frontier by connecting natural resources to rail lines and promoting the development of manufacturing centers and cities. Mohawk’s Mars game should do something similar, on a very different sort of frontier.

But where tycoon games tended to be longer-form strategy games, where players would watch their business empire take shape over hours rather than minutes, Johnson wants Mars to be fast-paced and competitive.

There are three areas of conflict. The heart of Mars should be a resource optimization game. Players will collect raw materials, build up an infrastructure to create intermediate goods, and then further develop the kind of sophisticated supply chain capable of producing finished goods.

All those goods, however, will be traded on a free market alongside other players. The difference between making a killing or getting killed can be just a few seconds’ hesitation before dumping supply on a starving market, letting another player to sell inventory at the highest price.

However, players can directly attack one another with underhanded sabotage efforts or outright theft. But the endgame of player vs. player conflict is buying out their corporations via the stock market. While losing the odd business deal may not kill you, letting your opponents accrue enough cash to do a buy-out is definitely fatal. 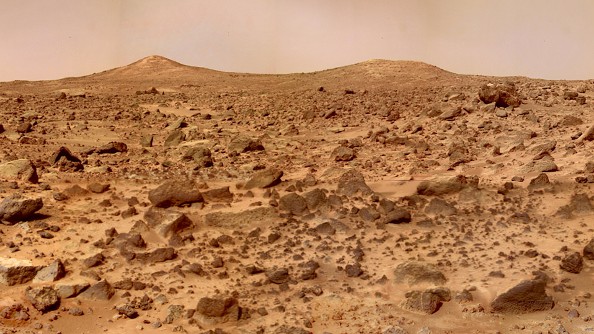 While Mars will definitely owe a lot to traditional RTS games, there is one thing Johnson would like to avoid: rote build order and frantic pacing.

“In a combat based RTS, you have these different factions, and you pick one, and there are all these specific build orders. Oftentimes, people have one build they rely on, and it’s just a question of execution. How fast can they work their way through the system?” Johnson said. “This game is about the free market. There’s 13 resources, you see what their prices are. Those prices go up and down depending on the actions of the players and the distribution of resources on the map. …You’re going to have to be adapting to the environment. Not in an obvious way, you’ll have to do it by feel, heuristics, rules of the thumb. When you’re playing an RTS, you shouldn’t know exactly how you’re going to play. What your first 10 actions are going to be. We want a short, 3-4 minute period at the start where it’s an exploration phase, and you can take a minute to breathe and think.”

This should also let Mohawk make a more accessible game. It’s a major issue with RTS design, according to Johnson.

“It’s amazing the RTS genre ever succeeded in the first place. Because the demands they place on the player are incredibly high. Because you’re pulled in so many directions, and there’s so much interface work to be done. I’m actually trying to make an RTS that doesn’t have any unit selection — and we’ll see, I may end up going back on this — because I feel that is an extremely difficult thing to put on your average players. With the high difficulty of managing RTS games, you have the reason why MOBAs have taken off so much. RTS should be this incredible format, there should be all these games you can play in real time with your friends. My belief is people have just not been experimenting with that format nearly enough.”

Johnson is serious about experimentation. While he’s a bit lukewarm on Kickstarter as a place for new ideas (and with backing from Stardock, it may not be that necessary for Mohawk), he’s excited about what Early Access means for game design.

“The games industry, one of its biggest problems is an immense amount of waste with games being made in a vacuum, or for an audience that doesn’t exist,” Johnson said. “You often have unrealistic expectations. Essentially arbitrary design decisions because people are guessing. People are making important decisions, and they aren’t going to find out until a year later whether that decision was the right one. We can’t afford that kind of risk taking. We want to make sure we connect with players as soon as possible.”

Making that connection is a major part of Johnson’s mission with Mohawk. After a long odyssey in casual gaming, he has come back to “core strategy” and wants to run a studio that will be known for great games in a perennially under-served, under-appreciated market.

“We want our studio to be a place where cater to strategy gamers. Where they know this is a place that’s working for them. We are looking for something that is a long term relationship. We’re not interested in jumping around from style to style, we’re going to be making strategy games. New, innovative, fun strategy games.”