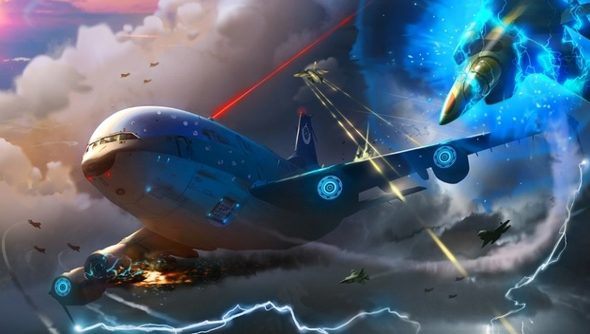 Consortium was a tantalising prospect: a murder mystery wrapped inside a sci-fi conspiracy with a subversive meta-narrative. And there are choices galore, letting you could blast your way through every problem or play through the entire game without harming a fly. It’s Twelve Monkeys meets Murder on the Orient Express, but the whole thing takes place on a plane that resembles Mass Effect’s Normandy.

Floating across Eastern Europe on its way to Dublin, Ireland is the Zenlil, a vast plane and one of the Consortium’s mobile bases. The chess-obsessed Big Brother entity employs planes like Zenlil to keep the various world powers in check, and the flying fortress has found itself – for the umpteenth time – dealing with a group of angry dissidents, the Homeless Mercenaries.

None of the crew are worried, of course, because the Homeless Mercenaries are all bark and no bite. Besides, there’s a Bishop onboard Zenlil, one of the action heroes of the Consortium. They’d probably be more concerned if they knew that Bishop 6 was actually being controlled by another person, a participant in a virtual reality experiment from another dimension, or even worse, if they knew that he was being controlled by you. 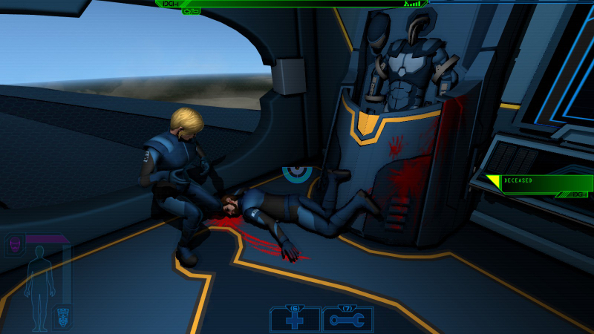 Instead of being Bishop 6, you’re controlling him from another reality, getting to interact with a parallel Earth in the future. But you don’t know anything about this time period, including what the Consortium is or who you are actually controlling. Bishop 6 should know what’s going on. He’s an experienced Consortium Officer. But you’re not.

Like an episode of Quantum Leap or Sliders, you play along, not giving the other characters any reason to think you aren’t Bishop 6. In my first game, I pretended that I knew what the hell everyone was talking about, carried out my orders, and – when I could get a moment’s peace – read up on current affairs in the massive database.

And that’s a big old job.

Consortium compels you to do quite a bit of reading. You can get through the entire game without knowing what’s going on, like a time-traveling drunk, but doing a bit of research pays dividends. It’s a shame that it’s so tiresome. The dialogue and writing are, for the most part, impressive, with a broad range of voice actors and compelling characters who feel believable and become suitably fleshed out despite the brevity of the game. Reading that database was tiresome and, worse, it made the game freeze and crash on two occasions.

Not only is it exceptionally dry, downright dull, actually, it’s designed in a way that means it will take you forever to find anything specific. It’s very hard to be immersed in the future when every single news report purporting to be televised is actually just a transcript. 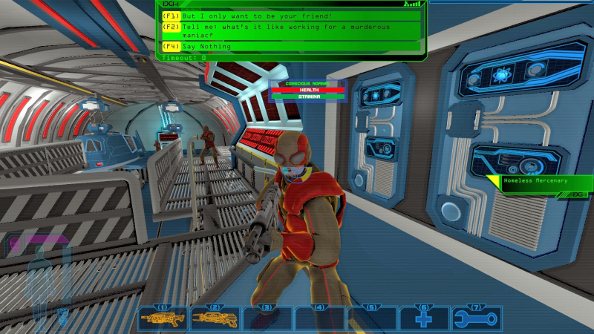 Yet it’s worth the effort, adding context to the adventure and making interacting with the crew more meaningful. At first these fellow Consortium officers are just strangers with titles like Pawn 4 and Rook 9, but within an hour they become murder suspects, potential traitors or possible assassins.

Super-soldier Bishop 6 sticks on a tiny moustache and becomes a futuristic Poirot. He must solve a murder, save the crew and Bishop 6, and, for an added bonus, not fuck up the universe.

Everyone’s a suspect because you don’t know any of them. Pawn 4’s rude. Maybe he’s the murderer? But Rook 25 fought with the victim before he died. And one of the Pawn’s lied about his friend’s whereabouts when questioned. They all could be guilty. But they won’t open up unless they like you or you ask the right questions. So you pander to their egos, try not to act too strange, and squeeze out every bit of information that you can.

Consortium is designed to be played multiple times. You can try different approaches, or use your knowledge to be a more effective Bishop. It’s an approach the loading screens actively encourage. And it’s fun.

For a laugh, in a separate play-through, I repeatedly confessed that I was from another Earth. Everyone reacted like I was a loon. They sent me for a brain scan, thinking I might have banged my head. Repeatedly. Go through Consortium aggressively, for instance, and you’ll be treated to a few dull bits of combat and a HUD that almost shuts down the moment you’re shot.

When you holster the guns, Consortium is a cracking adventure game with two equally mysterious and intriguing narratives.

Or at least it would have had the game had another few months work done on it. 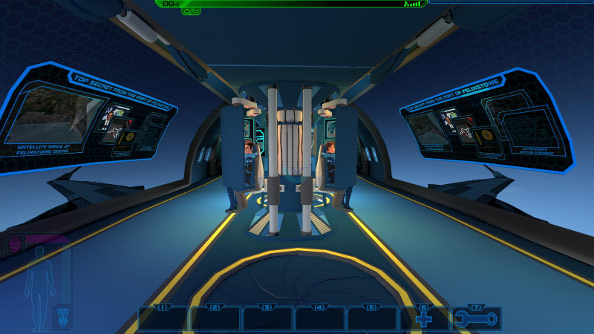 Consortium is rough. Not just bug-ridden, but at times, nearly unplayable. My intention was to review it at launch, but I stopped being able to progress at all. Developer Interdimensional Games apologised to players, promising to get it in working order in a month’s time. So I waited, because underneath all the broken parts was a game worth playing. I shouldn’t have bothered.

The day after the patch hit, I started a new game, and struggled just as I did the first time around. There are the minor irritations like weird animation glitches and shadows acting very unlike shadows. But they are just skin deep problems. Play Consortium, and you’ll see characters having discussions with characters at the other end of the ship, several crashes to the desktop, conversations that simply won’t trigger and crew members getting trapped in doors. These aren’t isolated problems: they happen regularly.

Which creates a conundrum. I absolutely love the game that Interdimensional Games have attempted. But had I not been reviewing Consortium, I’m not sure I would have continued playing. It’s a mess. Much of my enjoyment was marred by repeating sequences time after time hoping an event would trigger or trawling through old saves to find a spot before the game lost its mind. It’s just not fun to play when you have to fight it constantly.

Consortium is a tragedy. There’s an extremely clever game to be found within, but only when it works. It’s just the first part of a planned trilogy, and I have so many questions that I won’t be able to help myself, I need to play the second part. But I can only hope that it’s not held together by chewing gum and sellotape again.