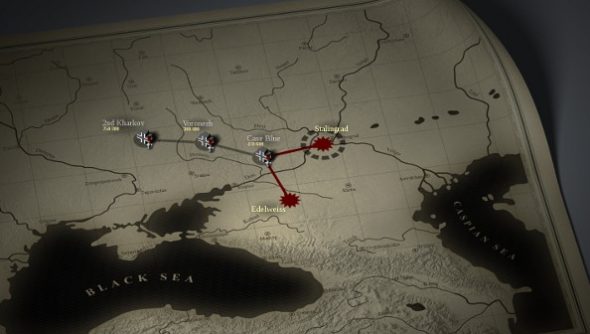 Unity of Command is one of the best wargames to come out in the last five years, and probably the greatest intro-level wargame since Panzer General 2. This week, it finally arrived on Steam on discount, only $15 / £11.24. It’s well worth checking out: indie wargames this close to perfection don’t come around often.

Unity of Command is built around a single idea: warfare comes down to supply lines. When units are fully fueled and armed, they strike with all their combat power. But the moment supplies start running low, they punch below their weight. That’s about as complicated as Unity of Command gets: when a unit runs low on supplies, it stops using all its combat power.

From that simple idea, however, comes one of the most diabolical wargames I’ve ever played. As the German spearheads race toward Stalingrad, or as the Soviet counterattack drives them back, supply lines get worse and it becomes harder to keep your units connected to the railways that act as arteries for the flow of supplies. You have to analyze each map on two levels: what is the terrain over which you’ll be fighting, and how do the supplies flow across the map? Devising plans that address both concerns is delightfully tricky. It makes UoC one of those games that I find myself daydreaming about, as I my most recent dilemma keeps nagging at me long after I stop playing.

Better still, the AI won’t justfight head-on, but looks for any opportunity to cut your units off from their supply sources. If you ever get frustrated with AI opponents who seem do nothing more than put up token, passive resistance on your way to victory, Unity of Command’s artificial field marshal is a godsend. I once left a single hex weakly defended while my armored units sprinted for their objectives, and the very next turn the AI blasted that crack wide open with a tank army and captured the supply hub for my entire army. Then it mopped the floor with the rest of my now-starved army. No cheating, and no scripting. Just a well-earned beatdown.

In other words, Unity of Command is all the best things about wargaming distilled into a simple, intensely challenging formula, and with none of the things that usually turn people away from the genre. Give it a shot, and you’ll start to see why we’re so excited for the upcoming expansion.

{"schema":{"page":{"content":{"headline":"Indie wargame masterpiece Unity of Command comes to Steam, and here’s why you should grab it","type":"news"},"user":{"loginstatus":false}}}}