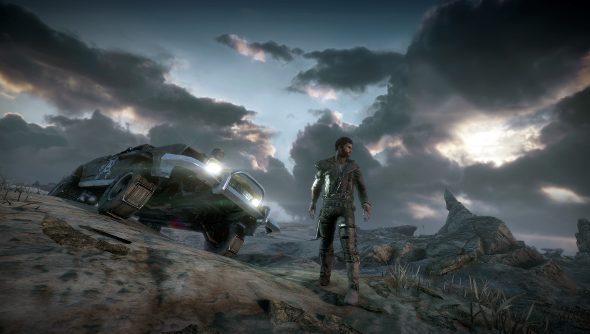 Sony had an impressive E3 press conference with big implications for the console war, but of particular interest to PC gamers was Avalanche’s upcoming Mad Max game and the news that Supergiant’s Transistor will be launching on PC alongside the PS4 version.

Mad Max is an open-world, third-person action game that features “brutal on-ground and vehicular combat against vicious gangs of bandits” according to a press release from Warner Brothers. We saw a properly grim, Mad Maxian trailer in which a wounded bandit is dying in the desert, begging to be put out his misery, and Max refuses to spend his single shotgun shell on the kindness and instead USES HIS CAR to dispatch the poor man.

Supergiant also announced that they will be launching Transistor on PS4 and PC simultaneously, with Mac and Linux versions to follow. What was interesting about Sony’s focus on indies is that they seem to making a bid to become the leading console for indies, enjoying parity with the PC. Sony seem to be trying to make their marketplace more like that PC to attract indies, but there was no real talk from Sony about trying to lock-down anticipated indie games. It does not look like the next generation is going to bring about a repeat of that odd moment of indie exclusivity that the 360 enjoyed six or seven years ago.