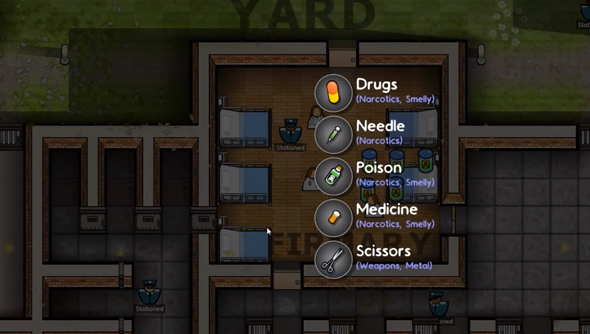 The big addition in the latest Prison Architect alpha update is contraband. Now almost every facility in your prison is a potential source of shivs, drugs, and booze. Keeping track of it all is going to be an important part of your job, particularly if you don’t want a high, boozed up administrator having his stash nicked by a prisoner.

So, yes, administrators all have a bottle of scotch in their bottom draw.

Prisoners in the workshop are going to have their hands on screwdrivers, hammers, saws, and drills. All of which you’ll be wanting to make sure don’t make it back into your general population. Luckily they’re all made of metal so installing some metal detectors should help you keep on top of it all. Methadone in your sickbay, though, that could be more difficult. Diligent guards posted in the room should limit anything getting out but you can never be too sure. Possibly of highest concern is the visitors room. Every person coming into the prison could be a potential smuggler, bringing drugs, cigarettes, a mobile phone, or weapons.

Controlling all this is a new prisoner ‘wants’ system. If a prisoner has a very high entertainment need and it’s not being satisfied by your facilities then they will seek out other sources of pleasure.

Prisoners won’t just hide things in their cells, they’ll find cubby holes all over the prison. Every item in your prison is a potential hiding place for illegal items. If you have a nice prison, with televisions to entertain your convicts and bookshelves, then you’re providing new hiding spots for them. Similarly, all day visitation provides a more frequent route for contraband to come in.

Once you find an item of contraband you can track the trail of where it has travelled in your prison, seeing how it was smuggled in and where it was hidden.

One side effect of searching is that it pisses off your prisoners. If a prisoner is unnecessarily searched then their likelihood to rebel increases. You can cause riots.

A new tab added to your folder of charts, a place where you can view spreadsheets about your prison, is a contraband panel; it tells you about the supply and demand for contraband.

A neat AI tweak that’s been made is that the prisoners will avoid metal detectors when sporting metal goods. Sticking one outside your workshop will actively discourage people stealing things.

There are other changes made in the update, here’s the full list:

There are four categories of contraband:

– Weapons: Used during fights. A high “Danger Level” within your prison will drive a high demand for weapons

– Narcotics: (Eventually) Used by prisoners who are bored or uncomfortable, or dealing with addiction

Note: Prisoners currently only make use of Weapons, but they will still steal the other types of contraband

There is a new Contraband overlay in the main toolbar, unlocked by the Chief in Bureaucracy

Shows all potential sources of contraband within your prison, and also all recently found contraband

You can see the market demand for any item in the new Contraband Report. High demand means many prisoners want this item

This screen also shows the supply of these items, representing how many of those items are owned by the prisoners

Prisoners who want something they can’t get will steal an item with high market value instead, so they can trade for it later

You can now order a search of a prisoner or his entire cell, from his Rap Sheet

There is a new emergency button on the toolbar: Shakedown, which searches every cell and prisoner in your jail

Note: Searching prisoners really pisses them off, raising the danger level of your prison

They also incorrectly detect something a small percentage of the time, resulting in unnecesary searches

All prisoners can now be affected by Status Effects, which change their behavior for a fixed period of time

You can see status effects on a prisoner by highlighting him.

– Suppressed: Prisoners locked in Solitary Confinement will become suppressed and compliant due to their harsh treatment.

These suppressed prisoners are much less likely to cause trouble.

– Well Fed: Prisoners who eat well will become “well fed”, contributing to the good feeling in the prison.

Well fed prisoners are much less likely to cause trouble.

– Fixed: Prisoners sometimes can’t find any need providers if the framerate is too low, and just stand around instead

– New audio work for the Bureaucracy screen and the Reports windows, and new searching powers

– Changed the way Guards follow patrols, so they should no longer clump together

– Contraband found by guards is still dropped on the floor, but will now auto-vanish after 10 seconds

– Fixed: Released prisoners are now permitted to route through Staff-Only zones on their way out

– Fixed: Callout units will now show their assigned route even when off screen

– Fixed: Drains will no longer block doors from closing

– Fixed: The time buttons on the clock will now highlight the currently selected speed correctly