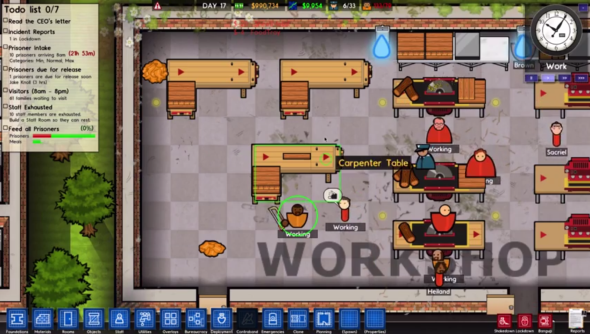 You might have been happy with a hopeless prison. Happy to pummel your inmates into submission by cracking their will in solitary confinement. Happy to suppress their freedom of thought with armed guards. And happy to deprive them of dignity with your sniffer dogs. I’m not judging you. Much. But with the latest update to Prison Architect – which Steve said “wait” in his Prison Architect review – you can now run your prison in a whole new way, rehabilitating and reforming your prisoners instead.

Introversion have introduced a number of new features to reform prisoners, instead of simply sending violent offenders to solitary. For a start you can set the prison to rule that any violent outburst from a prisoner results in a week’s therapy with the prison psychologist.

But behavioural therapy is a costly business. You’ll need to pay $200 each time you send a prisoner for a session with the facility’s psychologist and it takes a full course of five sessions for the therapy to be complete. So you’re looking at $1,000 for each prisoner you refer and a full week of sessions. On top of that, it might not do a thing. That’s the risk of running a reform prison.

The therapy, if it does work, doesn’t change the prisoner’s traits. They’re still prone to violence, drug use, and so on but their capacity to cope is increased. Their boiling point increases.

Another big new addition is education. “All prisoners must now complete a workshop safety induction, or a kitchen hygiene program, before they are permitted to work in the workshop and kitchen,” write Introversion. “We felt it was unrealistic that you could just dump 20 brand new prisoners into a dangerous workshop with heavy machinery and have them start stamping out number plates.

“Once prisoners are trained and working in the workshop, you can put the most skilled of them through a carpentry apprenticeship. Once completed these prisoners will be able to make high quality wooden furniture on the new carpenters table. This furniture can be sold for increased profits on the raw materials.”

The reforms extend beyond qualifications and therapy. There are now non-lethal weapons in the armoury, too. “You can now unlock tazers for your armed guards, and eventually issue them to all the guards and dog handlers in your prison. These are non lethal weapons that instantly incapacitate a prisoner without causing any damage, however they can only be fired once before needing a full hour to recharge. Perfect when a prisoner is smashing up his cell, not so great when outnumbered in a riot.”

You can now run daily programs to train, educate and reform your prisoners

Each program runs during a scheduled time during the day, and costs money per session

Different programs provide different benefits to you and the prisoner

Prisoners may only take part in one program at a time, and may only attend one session in that program per day

Most programs are voluntary. Prisoners will be less likely to volunteer for programs if they are badly treated

The teacher is an external freelancer who will enter your jail to teach his class, then will leave when done

Some prisoners have more affinity for academic topics than others.

In addition, the level of concentration of your prisoners is a major factor on their chances of success

Prisoners who have a natural afinity for practical work can attempt the Carpentry Apprentiship.

– Behavioural Therapy is run by the prison psychologist

You can view this data by clicking on them to bring up their rap sheet, then click the new “Experience” tab

– Activity : Shows the breakdown of their time within your prison, and what they were doing during that time

– Mood : Shows the amount of time spent in a good / bad / neutral mood. This is a simplification but a useful one.

– Condition : Shows how long the prisoner has been suppressed, injured etc.

– All programs completed are listed at the bottom of this page, showing if they passed of failed the program

You can now purchase additional weapons and equipment once you have an armoury on site.

Your guards must return to the armoury to pick up their new equipment as you unlock it,

and there is a cost to pay per item equipped.

Absorbs 50% of all damage taken, but slows down your guards by 30%

You must pay an additional $100 per guard for body armour.

– Tazers : Available for all Armed Guards.

This is a non lethal weapon which instantly incapacitates the target, without causing any damage.

Can only be fired once, then the battery must recharge before it can be used again (1 hour recharge time)

There is a cost of $400 per tazer to be paid as the armed guards collect their new equipment.

Note: Armed guards will use their shotguns instead as soon as you give the “weapons free” order

– Tazer Rollout : Equips all guards and dog handlers with Tazers as well as your armed guards.

There is a cost of $400 per tazer to be paid as the guards collect their new equipment.

Use the PLUS and MINUS keys to adjust this value in game, or edit it directly in preferences.txt

– Fixed : Sometimes very small Laundries / Cleaning Cupboards would not show up in the Deployment/Jobs screen,

unless those inmates are attacking staff or about to escape

– Fixed : Face-in-the-game entries are now sorted to the top of the community biographies list

– Fixed : Sun shadows on trees were sometimes rendered much too large

– Fixed : Dogs were unwilling/unable to enter staff only zones

– Fixed : You can no longer build road gates over lakes, or at the edge of the map