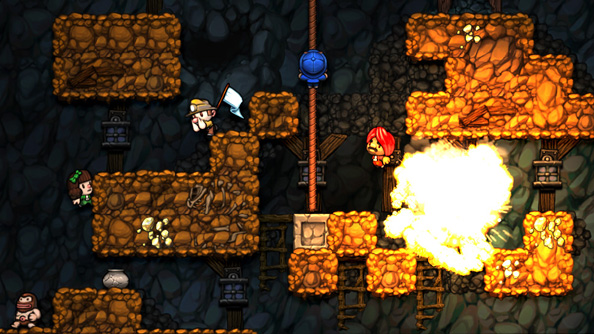 Do you know Spelunky? It’s a mongrel platformer that takes the skip in its step from Mario, the crack of its whip from Castlevania, its environmental variety from Minecraft, and its bureaucratic cruelty from Nethack. It was one of the best indie games on PC in 2009, when it was freeware, and remained so for its Steam remake last year. In recent months, it’s found a growing YouTube audience thanks to a Daily Challenge feature that saw its randomised levels standardised for competitive play.

That’s something creator Derek Yu seems to have recognised. In a rare update this week, he’s introduced an on-screen icon to indicate when somebody’s playing a Daily Challenge, fixed a related bug, and added a “less intrusive” Pro HUD option in the graphics menu.

He’s done plenty more besides – tackling a host of bugs and some persistent Windows 8 issues.

Yu’s honesty is refreshing, if a bit unnerving – he says he’s “attempted to fix” some of the game’s recurring crashes, which occurred when changing resolutions or when playing on laptops running integrated Intel graphics cards. You’ll have to run the game on your rig to find out if he’s succeeded.

He’s attempted, too, to fix Windows 8 compatibility problems that at worst saw the game crash on startup.

Infinity is an inherently terrifying concept, and Yu has done his bit to keep it from terrorising his game. Alt-tabbing during the Ankh artifact’s animation no longer causes it to grow endlessly – and the occasions a dead shopkeeper or black knight’s corpse would clone infinitely are now, thankfully, in the past.

The Ghost – the near-invincible opponent that enforces Spelunky’s level timer – had been known to kill players during a cutscene, which must have been particularly galling, so we can be glad to see the back of that. And rare ghost deaths will now be properly recorded, too.

Finally, Spelunky will no longer crash if the mouse or keyboard aren’t detected. Yu’s sure about that one – it’s gone.

In fact, the only crash Yu doesn’t seem to have tackled is the one that sends you right to the very beginning of the game upon colliding with a spider or lava or spikes. Sort it out, Yu, will you?

Here’s the changelog in full: