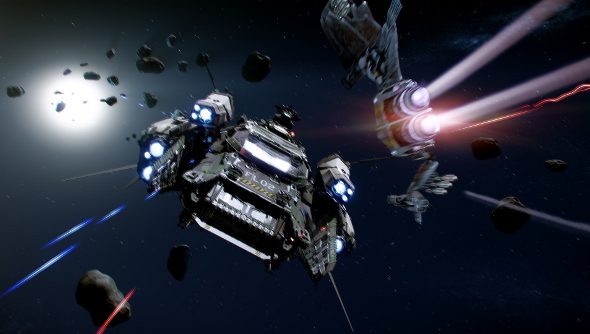 Star Citizen backers were hoping to get into some space tussles near the end of the month, playing around with the alpha’s dogfighting module. Unfortunately, this isn’t going to happen, as Chris Roberts explains, and the module has been pushed back so it won’t have to rely on the CryEngine netcode. Instead, Roberts wants the module to run on Star Citizen’s own multiplayer system, which wasn’t going to be ready in time.

“Originally when I first started this journey I didn’t dream that we would be entirely community funded so early so I thought that if I released an early dogfighting build it would help drum up interest in the project and get some good community feedback on the player versus player fun and balance,” Roberts says.

“As time has progressed I’ve become more nervous taking the down and dirty route with the initial dogfighting build, especially as our numbers grow. With so many people in the Alpha we need a whole other level of backend support, which would require serious work on CryEngine’s existing multiplayer structure – a lobby system, spinning up servers to handle each session – all things that we are building the new Star Citizen backend to handle. Unfortunately the server backend technology will not be ready for prime time for a couple more months.

“I feel that the Dogfighting module, especially with Star Citizen’s greatly increased profile, needs to be more polished than a typical “alpha”. There are a lot of eyes on the game, and more than a few people wanting us to fail. Because Dogfighting is the first module that will involve significant gameplay, it has to be good – I don’t feel that we will get a pass just because it is pre-pre alpha.”

The delay pushes the module back a few months, giving the team time to “deliver something special”. But backers won’t be left with nothing at all: a hanger update will be released soon with some added functionality. And at 9AM PST, December 20, there will be a two hour live stream showing off dogfighting, and discussion about updates to the hanger and Squadron 42.