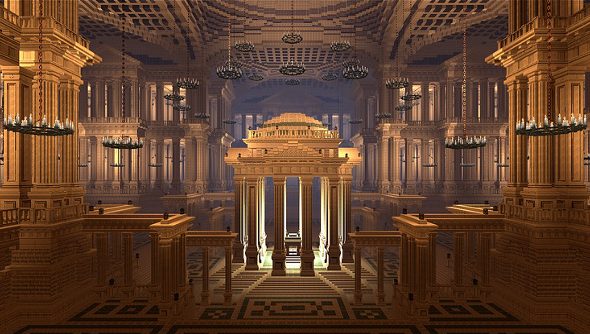 Sticks & Starships: Genesis appears to be so huge, so ridiculously ambitious, that any number of things could have been placed at the top of the list of its features. In the email from Aloft Studios which I found in my inbox today, this was what they led with: “Taming and breeding bloodthirsty, gigantic, wild cassowaries.” I never realised how much I wanted this until I read it.

Narwhals also make an appearance, and you can blooming ride them. Sticks & Starships offers up huge procedurally generated voxel galaxies, and all I really want is for them to be filled with cassowaries and narwhals.

It’s got a little bit of everything: exploring the ruins of ancient civilisations, building cities and citadels, mining into the heart of a world, fighting big ol’ monsters – it sounds like a fantastical fantasy exploration romp, but then BOOM, science.

It starts with alchemy and performing empirical science, but there’s also robotics, building nuclear reactors, constructing tank armies to fight demons and even unlocking the power of rockets and the warp drive, allowing you to bugger off into space.

And when you’ve got your massive industrial complex or Greco-Roman paradise fueled by nuclear energy, you can add dashes of culture, creating pixel artwork or composing music with sheet music – all in game.

It looks like Aloft are going down the Kickstarter route, but the campaign has yet to start. But you can still check out the draft and leave some feedback.

{"schema":{"page":{"content":{"headline":"Sticks & Starships: Genesis will have you raising a primitive civilization into an interstellar empire while riding cassowaries","type":"news","category":"sticks-starships-genesis"},"user":{"loginstatus":false},"game":{"publisher":"","genre":"Indie","title":"Sticks & Starships: Genesis","genres":["Indie"]}}}}